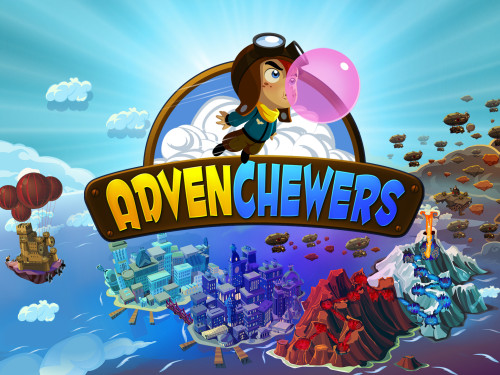 I received a download code to try out the new game, AdvenChewers. Opinions of the app are 100% my own.

AdvenChewers follows the adventures of the Kid. His dad was kidnapped by a maniac with a penchant for creating evil flying machines. The kid must travel through multiple levels armed only with special chewing gum and the aid of some birds. Sounds a little silly, doesn’t it?

Well, at first I wasn’t quite sold on the game because I have an aversion to chewing gum. No, really I can’t stand the stuff. But, I gave the game a try and found it to be very fun and visually a home run. The animation is fantastic and detailed. The obstacles get more elaborate and difficult as you go along but some of those can be used to your advantage. 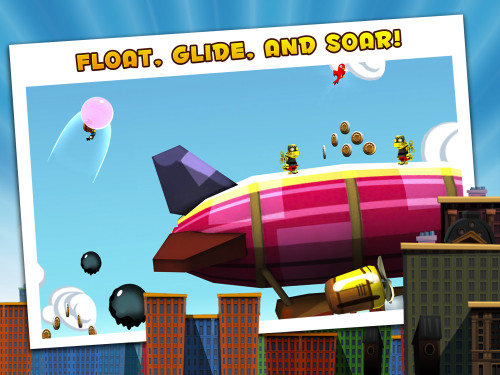 Gameplay is pretty simplistic but hard to master. You only need one finger to play, too. The character of the Kid keeps moving forward. You can tap the screen to make him jump or tap and hold to make him blow a bubble and soar into the air. Don’t hold the screen too long or that bubble will pop and you will fall out of the sky. Along the way you should save 3 birds per level. The birds act as extra lives if you fall off the screen and they count towards the goal of saving three birds a level. If you do that then you’ve fully completed the level. You can always go and replay a level to get a higher score, too. 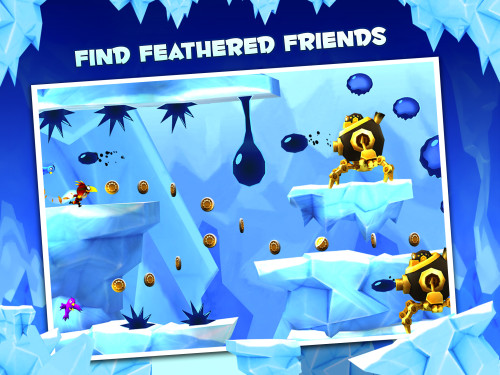 As you progress through the game you can earn more powerful gum, some gum can freeze things, some can electrocute things and others can double or attract gold coins. You can also snag a phoenix feather on each level and a powerful phoenix comes to you and lets you ride on it. You blaze a trail through the sky and can destroy obstacles that would otherwise hurt you. 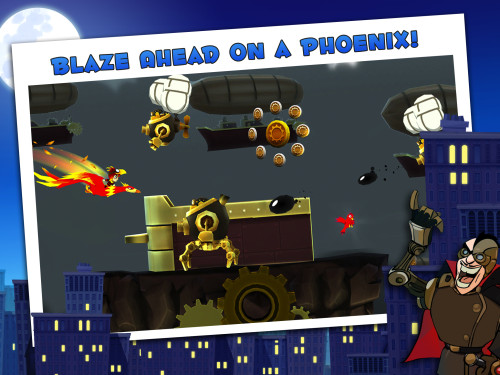 For $0.99 this is a decent buy with plenty of play time packed into it. Here is the official Press Release on the game and the game trailer.

Players Harness the Mighty Power of a Magic Bubble Gum as they Soar Across Cityscapes, Above Mountains, and into Volcanoes

AdvenChewers follows the story of the Kid whose renowned inventor father is kidnapped by a maniacal general, obsessed with creating flight-oriented machinations for evil means. With the help of special bubblegum, feathered friends, and a fearless heart, the young AdvenChewer glides across towering cities, cascading ice caverns, dangerous volcanoes, and zeppelin guarded skies to track down and save his adoring father.

“AdvenChewers is a must-have app for casual gamers with its imaginative worlds and intuitive gameplay,” said Nate Jones, Vice President, Publishing – Mobile, Social & Emerging Platforms, Warner Bros. Interactive Entertainment. “Social components add to the fun enabling players to see their friends’ progress and share their own as they journey through the game.”

Using Game Center with iOS7 support, players are visible to friends and the gaming community. Players can check out the leaderboard on every level to see how they rank compared to their friends. AdvenChewers also includes Facebook integration so players can share their game experience with others.

The AdvenChewers App is available for $0.99 from the App Store on iPad, iPhone and iPod touch or at http://www.appstore.com/advenchewers

About Sarbakan
Sarbakan is an innovative developer of social mobile games and mobile entertainment content. With over 15 years of proven experience as a game studio, it delivers the most memorable and highest quality experiences possible for its worldwide publishing partners and customers. It designs games that stun, surprise, and drive players back, time and again, to each brainchild it releases. Sarbakan has created over 800 titles since its inception.