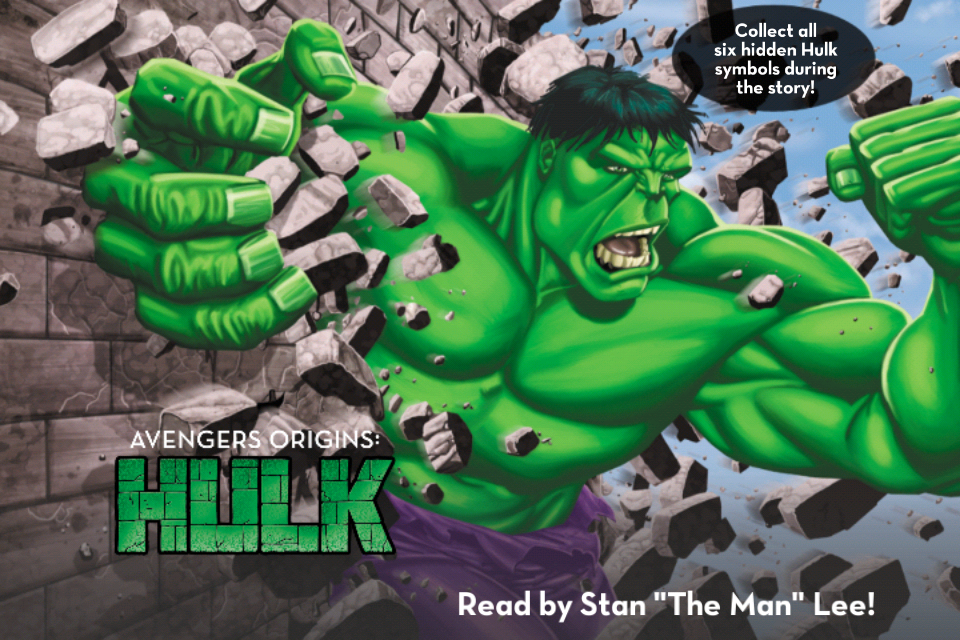 Eva and I received a copy of the Avengers Origins: Hulk by Marvel Reads to test out and review. With the Avengers movie coming out in just two days away this is the perfect time to introduce your kids to one of the most misunderstood Avengers, the Incredible Hulk. This new Marvel Reads app gives a great origin story to this amazing character. The story can be read by Stan “The Man” Lee, creator of The Hulk. With beautiful artwork and simple storytelling this is a good story to encourage young readers to read for themselves.

There are three different modes for the app, Read to me, Auto-Turn Pages and Young Reader Mode. I like Young Reader Mode because you have to click the arrow buttons to move to the next page. I like this because Eva is known for tapping the screen over and over again. When you are not in Young Reader Mode if you tap on the screen you advance the story so with Eva clicking everywhere would have us skip pages inadvertently. 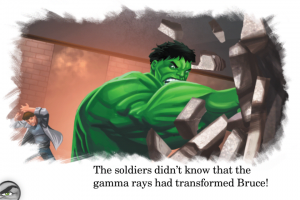 While reading the story there are a few interactive things that your young reader can do like balance a take, throw a car and punch through a wall after giving their best Hulk roar. Also along the way keep your eye out for Hulk fists to tap and collect, each with a Hulk related saying. Collect all six for a special surprise.

The app is a good one with decent graphics and a good story. I would have liked to have seen it be longer with more interactive options.

WHITE PLAINS, NY – April 12, 2011 – Disney Publishing Worldwide (DPW) announced today the launch of two new storybook app titles based on the Marvel Origins series, which were inspired by the original Marvel comics written by Stan Lee. Only one month prior to the much anticipated theatrical release of “Marvel’s The Avengers,” “Avengers Origins: Hulk” and “Avengers Origins: Assemble!” bring the anticipation for the movie to mobile devices now, allowing fans to read along with Stan Lee as they relive the epic origins of the Hulk, Captain America, Iron Man, and Thor.

“Because Tony Stark and Bruce Banner are two of my favorite characters, it’s exciting to see their stories as Super Heroes come to life in digital storybook form just a few weeks before the release of ‘Marvel’s The Avengers’ movie,” said Stan Lee. “They are a great prologue for kids, taking them back to the beginning—revealing how Earth’s Mightiest Heroes assembled to fight foes so powerful that no single Super Hero could defeat them.”

“Avengers Origins: Hulk” is a multifaceted read-along app allowing children ages 4-10 to follow Lee’s story narration of Dr. Bruce Banner’s epic transformation into the Incredible Hulk. With detailed artwork and cutting-edge animations, comic fans can enjoy this multi-dimensional app through a variety of interactive touch-screen activities, including roaring, transforming into the Hulk, and testing the Hulk’s strength by breaking through walls, stopping tanks, and more.

The “Avengers Origins: Assemble!” app serves as the perfect introduction to exciting Super Heroes like Iron Man, Captain America, Thor, Hulk, and more. Children can read along with Lee, match heroic accessories with each Super Hero, use Thor’s powers and the Hulk’s strength to stop the Atlanteans and Namor, and melt the ice to free Captain America from his frozen prison!

Disclosure: We received this app to review for free. Opinions about the app are 100% my own.