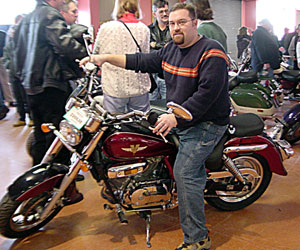 If you haven’t been on a motorcycle before, you gotta try it once in your life. This is my Alpha 250 V-twin Classic. It looks like a baby Fat Boy and in this photo it looks like a dwarf under my posterior but this bike has plenty of power.

A 250 you say, that is so small, how can there be power there? Well, this 250 isn’t like the Honda rebels of old, this is a beefy motorcycle that has provided me with hours of enjoyment during this past summer. Granted I’ve only been able to ride under 600km. It is a bike that is sold mostly in Europe and Asia and therefore the odometer and speedometer are in Kilometers. You get used to it. Eventually I’ll be moving on to a bigger bike, not before I buy something smaller and it doesn’t have tires but it is round. But for now this is a great bike to tool around on.
Alphasports Links: