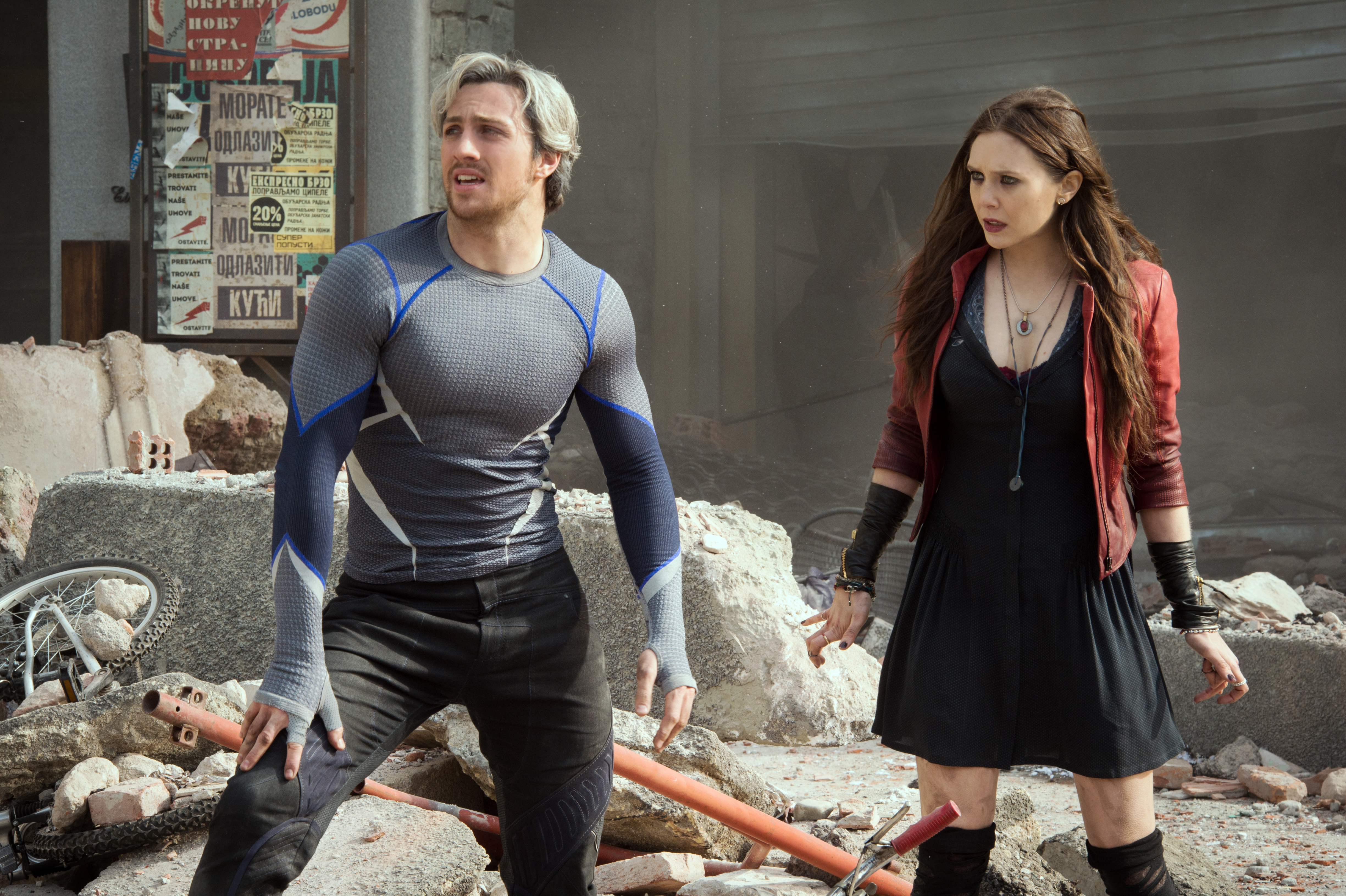 For our second interview of the day at the Marvel’s Avengers: Age of Ultron press junket we met with the two newest actors to the Marvel Cinematic Universe, Aaron Taylor-Johnson and Elizabeth Olsen. These two play the twins, Pietro and Wanda Maximoff who are also Quicksilver and Scarlet Witch respectively. Aaron and Elizabeth told us about being fans of Marvel comics, being a ‘powered’ superhero and how it was to come into this established universe with actors who have been playing their characters for many movies.

A question was asked of Elizabeth regarding playing a character who is fighting but isn’t punching and kicking but rather using powers that will be added in after using special effects. I liked how she responded and it makes much more sense when you see her on screen.

Since basically all of your powers are special effects how was it for you to act out those parts where you’re just kind of staring?

OLSEN : Well, you know what it’s actually really fun because a lot of people have stunt doubles and my stuff is like a dance, so I can’t have a stunt double come in and do that. I always got to be in control over my character’s body movements which was cool, and it was fun because there’s no blueprint to how Scarlet Witch moves ’cause you just see these like awesome finger, hand gestures and these circular red things.

I worked with a movement coach and she and I watched Joss’s version of Scarlet Witch and that was really enjoyable to watch ’cause he would do the motions and we would interpret it into our own thing. It was really fun to work with the dancer on something like that and it adds a different visual element to the fighting. It also felt a little funny because you’re like I’m not making contact with anything, like literally zero contact. There’s a lot of trust that goes in when you have special effects that I wasn’t used to and then after seeing the movie I was like aha, now I’m comfortable.

Aaron Taylor-Johnson also had to work a lot with the special effects for his character. . His character, Quicksilver, had many more physical things to do including running. Lots and lots of running.

JOHNSON : Yeah. That was pretty much what I did all day long. You know, it was like if in doubt, run. Yeah, all the special effects is sped up. We’d shoot the scene like if Lizzy was in the scene I’d run up to her. We’d shoot that. We did the dialogue and then we’d have to do a plate afterwards where she’d step out and I’d do the run up and then they would speed that up. It’s like a plate shot. Even though you wouldn’t really know because it goes so quick. But yeah, all the running where there’s a blur it was me behind it.

What I thought was interesting was that Aaron and Elizabeth worked together on the movie Godzilla and so they already had the benefit from working together and that added to their chemistry. I think it also made it more believable that there were these two new outsiders who were coming into a much larger established group.

OLSEN : We finished filming Godzilla and then we both that summer got a phone call that was like you guys got the parts and we’re like whoa, okay and that was kind of it. It was really crazy and exciting and Aaron and I were really excited that we got to work with each other again more so because in Godzilla we, if you’d seen it we didn’t really get to work with each other as much, yeah.

JOHNSON : Yeah, I mean ’cause stepping onto the set seemed kind of, you know, it was such a big ensemble. It felt kind of daunting, you know, to step on with Lizzy who we already had that kind of work relationship which made it feel a lot more comfortable.

I recently started my Marvel Unlimited subscription which is a service where I can read a huge backlog of Marvel titles. I’m currently reading the Civil War event which takes place over 90+ comics and many Marvel titles. I’m gearing up for Captain America 3: Civil War. But, after talking with Elizabeth Olsen and hearing her excitement over playing Scarlet Witch I think that the next series I will delve into is the House of M. I’d like to see if what she says about Scarlet Witch is something I agree with. Here is what she said about being attracted to this role.

What attracted you most to the roles?

OLSEN : Well, I’m a fan of Marvel already and then Scarlet Witch. I didn’t know who she was before hand and then Joss was telling me about her. Then we both asked for a lot of research on our characters and they gave us every comic book page that both of our characters have ever been on. It was this huge stack. I think she’s one of the coolest characters in the entire universe of Marvel I think largely because of the House of M series because she’s the most powerful person in the entire universe, X Men and Avengers combined. I think she’s really nuts too and I like the — I mean I just find her to be really…

Following up on that question earlier about Aaron and Elizabeth coming into the established universe there was this question.

You said that when you came onto the set with you guys working together before that made it easy but what was it like coming out to the set with the established?

JOHNSON : Yeah, that was kind of the initial thing of like oh, god everybody knows, you know, this is like their fourth or fifth movie playing these characters. They’re pretty comfortable in that kind of situation and with each other and just understand the whole kind of the mechanics of it ’cause, you know, this movie is such a machine. It just keeps going and going and you’re a small piece to the Rubik’s Cube. You just have to trust with these guys but you’ve seen the quality of movies they’ve done before.

It feels slightly daunting but it sort of very quickly becomes like a very kind of family environment they’ve set up over the years. It’s kind of crazy but yeah, it was good.

With Lizzy it’s just like our characters are kind of combined so I can kind of rely on her and vice versa I think so. In those sort of situations it’s just like we kind of feel slightly uncomfortable around the Avengers anyway. So early on that we’re kind of outsiders anyway. So I think it also kind of played within it, you know, what I mean?

I’m pretty sure that I’m not spoiling anything with this last question that was asked of Aaron because you can see from the trailer that Quicksilver and Scarlet Witch do have a change of heart within the movie. It is obviously established in the comics that these two characters are good guys and sometimes on the Avengers roster so it should come as no surprise.

What was it like going from playing a vigilante with essentially real superpowers in Kick-Ass to an Avenger with actual superpowers?

JOHNSON : It’s a lot more fun having powers for sure. Yeah, I mean it’s good fun. They’re both really different. Characters with different dynamics but, it’s a lot of fun having powers and doing these fight sequences. Like just visually anyway it’s the most exciting for me to see all of your favorite superheroes all fighting together as a team and they all have their different skill sets and they also collide with each other. It’s amazing to watch but also it’s amazing to do.

We had a very nice time with Aaron and Elizabeth. They were very gracious and humble and they stayed to take a group photo with us. I thought that they each gave excellent performances in Avengers: Age of Ultron. I look forward to seeing it again armed with the knowledge from this interview.