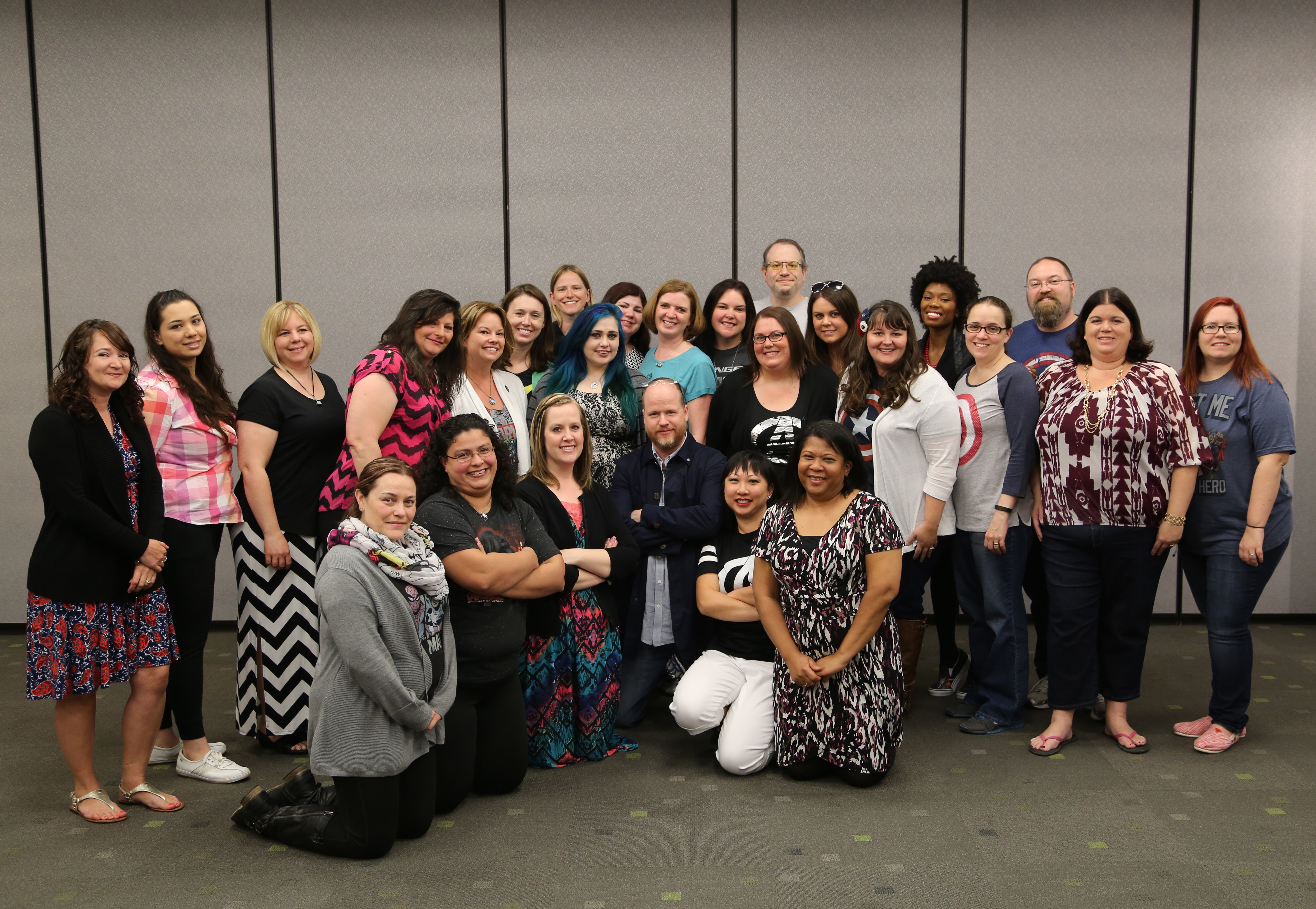 One interview that I had been looking forward to so much was with Joss Whedon. I have been a fan of his work for so long. You name it, I’ve watched it, Buffy, Angel and of course Firefly. I was just busting at the seams to ask him something but was too afraid of saying something dumb that I held my tongue. I had already asked a number of questions in other interviews and sort of fumbled a few. I just wasn’t going to let that happen in this one, so I hung back and took it all in. Joss did not disappoint.

Joss walked in to enormous applause from the bloggers. We were all excited to talk with Joss. At this point we had already seen the movie and also interviewed Joss’s brother Jed on the set of Marvel’s Agents of S.H.I.E.L.D. so we were geared up and ready to go. So keep reading because it was so much fun.

So, you have that iconic shot of the Avengers jumping in slow motion which, I think all the fan boys and girls have like gone wild over. Can you talk about how that came to be, like, whose idea it was to?

WHEDON: That was the last shot we got finished, ’cause it’s over a minute long and I wanted to create some frames that were just unabashedly comic book frames that would speak to our love of the thing. That one took longer to create than anything else and to dial in, but it was important to me to have that right away, like first up in the movie.

So, rather than take time digging into where the Avengers were and how they came back together we get right into the action and it is amazing. I’ll talk more about that in my review, Friday. But as Joss continued to say that rather than go and get each character and bring them into the story Whedon said, “instead just go boom, we’re back. This is what you love. Are you having fun? Good. Now we’re going to tear it apart.”

It is funny because when I watched the movie I wanted to know how they all got back together, how long had they been fighting as a team and more. I asked that question of Kevin Feige (Interview coming Thursday) but when talking with Joss it made a lot of sense to have the team out there and working together. Comic books do that all the time with the team in the middle of a major fight against the bad guys. That is what we see, a comic book cold open. It speaks to Joss’s expertise with the genre.

This movie is much bigger than the first Avengers one with a larger cast of characters. The question was asked about the difficulty of balancing screen time for so many characters.

Was it really hard to make sure everyone got enough screen time?

WHEDON: Um, yes! [LAUGHS] Yeah. I have to say that there was a big humorous emphasis on the ‘yes’ here. So many funny things that Joss said are hard to convey without hearing them, he is so fast and quick witted. I will do my best to give you the vibe from the responses.

So, how did you balance that?

WHEDON: It’s hard. What’s important is making everybody integral to this story and not just have it sort of be a roll call where it’s like, ‘and I’m also in the film’. Making sure that the twins’ story was part of Ultron’s story, and making sure that their perspective on the Avengers had something to do with Ultron’s and so that there was always a reason for everyone to be together.

The good thing is they worked so well against each other, so when you’re giving somebody their moment it’s usually with somebody else. It’s usually playing against somebody else, either arguing with or having fun with or teaming up with. It creates its own little web, so it’s difficult. They’re (the characters) doing some of that job for me.

In the trailer we see a lot of conflict. There is one point where Iron Man goes up against The Hulk. It is a really epic fight scene. So the question was asked about filming this scene.

In the movie, we saw the introduction of the Hulkbuster and one of the most epic Avenger versus Avenger battles, I think we’ve ever seen. Was there any difficulties filming that?

WHEDON: There is some slight enormous difficulties in the fact that neither of those people exist, so there’s a lot of ‘guys, we’re here now he’s over there’. We had the thing mapped out very carefully, so it was, in a way, simpler because they weren’t like ‘I need to go again’. You shoot all of this stuff sort of with the faith that this will work physically. Then the hard work comes, up at ILM, where they’re dialing in this action you’ve described in a way that looks human and believable, yet completely over the top. The work they did with those guys and with the Hulk, in particular, who’s not just the Hulk there, but he’s angry even for the Hulk. He’s unhinged and it’s a different performance than he’s given before and the way they captured that, to me, was breathtaking, but it took a little time.

Earlier in the day we had interviewed Aaron Taylor-Johnson and Elizabeth Olsen. I posted that interview yesterday and if you haven’t read it go on over and check it out.

So we just met with Aaron Taylor-Johnson and Elizabeth Olson… what was it about them that made them perfect for the roles that they got?

WHEDON: You know, I didn’t want anybody else. I just wanted them. Aaron is too pretty to live, but I’ve dealt with the Hemsworth problem, so I can forgive. He’s somebody that I just saw, even in Kick-Ass where he’s playing kind of a weak character, that he just commands the screen. It was, I think, Nowhere Boy, where I just said, this is my guy because he’s an old school movie star. He’s that commanding and beautiful. But he also, he looks like he could be kind of an arrogant dick. He’s not. He’s the sweetest puppy I know, but he’s great at playing that sort of like, ‘oh, I got this’. That’s Quicksilver to a tee. Quicksilver is that sort of, he’s always hotheaded, he’s always being a pain for everyone, but is essential and very cool.

And Lizzie, you spend two minutes with Lizzie and you not only don’t want anybody else for the role, you think maybe she should play all of them.

One of my favorite scenes of the movie was the party scene in Stark, I mean Avengers, Tower. There were a bunch of people at the party, some we know well from other Marvel movies and some we see all the time. The party was a fun moment but it was difficult for Joss to film, at first.

I just had a reader ask, what was the hardest scene to shoot? Do you have one that sticks out?

WHEDON: I struggled every much with the party scene. The after party scene. We shut down during shooting early one day because I was just, I started shooting it and I hated everything I was doing. Then I was like, what should I do? What’s wrong? Then I realized, wait a minute. Didn’t I just make an entire movie where people sit around and drink? Wasn’t that ‘Much Ado About Nothing’? Ohhh, and then I called. I was like give me some, I need cards, I need beers. Anyway, I get all these things and we’ll do it all handheld and we’ll just let them go and as soon as I remembered how to shoot a party, it became a party.

On that note, that party scene is actually my favorite scene in the movie and so I’m curious to that, if it was all scripted or were the actors ad libbing at all, or?

WHEDON: There’s a little, they’re throwing stuff out. With Robert in a situation like that, I’ll usually give him five or six options just to see what tickles his fancy and he’ll sort of run through them. Most of it is scripted, but I like to leave a little room for those guys. First of all, they’re all funny, articulate people who really know their characters and second of all, it helps the flow particularly in something like that. You don’t want to feel camera moves and dialogue. You just want to feel like you stayed at the party.

It certainly felt like a party and the overall interview with Joss felt very natural. He was so up front and fun with us. There was a lot of laughter during the interview. He went on to say more about movie but I’d rather not reveal too much and let you see for yourself this Friday when Avengers: Age of Ultron hits theaters. One last thing I will mention is that the movie is 1 minute shorter than the first Avengers which was a point of personal pride Joss.

2 thoughts on “#AvengersEvent Interview with The Master – Joss Whedon”