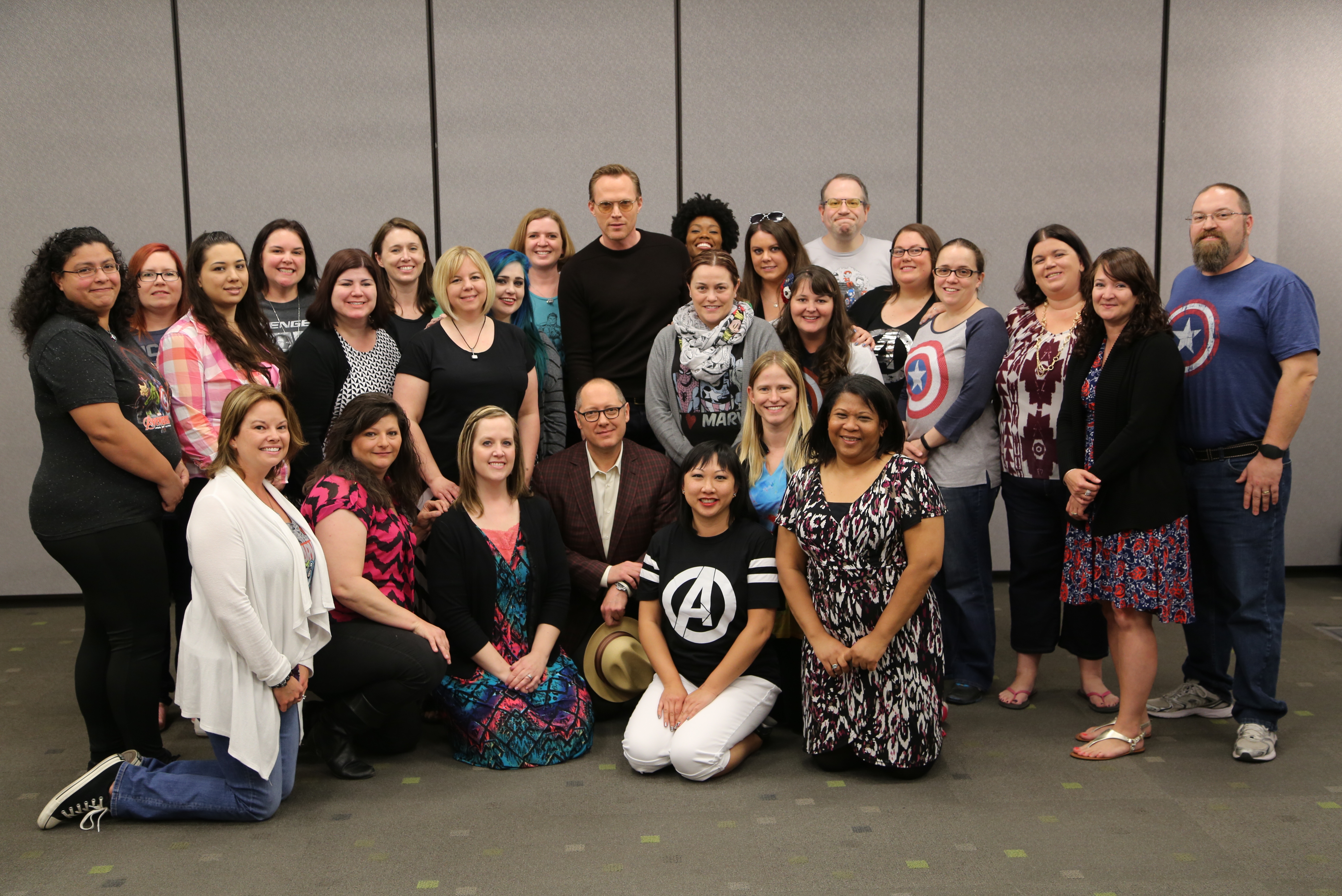 During the #AvengersEvent Press junket for Marvel’s Avengers: Age of Ultron we were treated to a double interview with James Spader and Paul Bettany. I attended an expense paid trip by Disney to press events for Marvel’s Avengers: Age of Ultron (#AvengersEvent, #AgeofUltron), all opinions as always are 100% my own. This was a pretty lively interview with James taking the bulk of the questions and telling some fun stories. I think that he was having a good time with use. The highest praise from James was right at the end where he stated, “Is that it? Oh my God. It seems like we should dump something else and just stay here for a little bit.”

James Spader can talk. He tells these long wonderful stories and I don’t remember the exact question that kicked off the start of the interview. Somehow the recording was not started until a little ways in so we missed out on a little something at the beginning but James started off by talking about how Ultron was created and how he was part of the process. It was much more involved than simply providing the voice. He actually got into a fractal suit and his movements, his mannerisms are the movements of Ultron. He told us this story.

JAMES SPADER: I’ll tell you a very funny thing. I’m just excited about it because somebody in an interview just before this had asked specifically about this and I hadn’t thought about it until now. The very first day that I walked onto the studio lot, before I ever hit a set or anything… I walked into a big empty room and there were cameras set up around and there was a bunch of guys with a whole bunch of laptops and women all sitting around. They put me in a fractal suit. Which is just a sort of a two piece which looks like you’re gonna go for a run, but has shapes and colors and things all over it. Then they dotted up my face and they put a big rig on my back and a big headgear rig that had two sort of antenna that come down that are cameras that are right here with headlights right here, so I’m lit right here.

They had me go through a range of motions: fingers, everything, head turns and all the rest of it. Then, they put it into some program on the computer or something and I stood around for about ten, fifteen minutes. Fifteen minutes later, also set up around the room were these monitors, I could walk in my outfit into the center of the room and turn my head, move my fingers, go like this, and I could look at a monitor and see a sort of formative stage of Ultron doing everything I was doing.

So right from the very first moment I arrived there, I could start getting a sense of what sort of physicality would be appropriate for that eight foot robot. There was a guy there, quite small, who would’ve been proportionate to my height. I’m five-ten. He was very small, sort of proportionate height to what, not Chris Hemsworth, but maybe an average height Avenger might be in proportion to me if I was eight feet tall.

He was a stunt guy. He was wearing a fractal suit and all the gear as well. They made him do the range of motion and everything else and within 15 minutes he and I would go move around the room. He was different characters and so I was able to see right away me as an eight foot Ultron with another actor who’s a proportionate height to what an average size person would be.

It was really amazing. So right from the very first moment I was already getting a sense of how to perform for this character.

Poor Paul, could not get a word in edgewise and we wanted to know more about his new role as Vision. This was such an interesting character and it was great to see Paul land an expanded role in the film. He has voiced J.A.R.V.I.S. in all the previous movies. So, the question was asked of Paul. And his answer made us all smile.

I have a question for Paul. We always knew you as J.A.R.V.I.S. What was your reaction when you found out that you would be The Vision?

PAUL BETTANY: Well, it was sort of vindication really because I had just come out of a meeting with a producer who told me my career was over. This is a true story. I sat on the curb in Hollywood with my feet in the gutter and my phone went and I looked at it and went, “Hello?” I didn’t recognize the number and it was Joss Whedon. He said, “Do you want to play The Vision?” And I went, “Um,” it’s so quick these days, “yeah, I kinda do.”

True story. So it was lovely.

How is it different for you on set? Like, I don’t, in the other movies where you’re playing J.A.R.V.I.S. were you there interacting with the other actors?

PAUL BETTANY: I was brought in at the last moment to solve any clarity issues the film had which was my superhero power as J.A.R.V.I.S.. What was the difference? The difference was I had to go to the gy, had to stop eating carbs. I finally got to be on set with a bunch of really lovely, creative, talented people. However, it also means that I have to show up at junkets now, you know? The Lord giveth and the Lord taketh away.

JAMES SPADER: I did not have to cut back on carbs. Somehow amazingly enough, those animators were able to slim me right down.

For Paul, how much of Vision was makeup and CGI?

PAUL: It was a lot of makeup, ha ha. I would sit in the chair and then you would wait for eternity to come and then you’d be… done. So it’s all real. From about here forward [Motions to parts of his face] the prosthetics, well the prosthetic actually stops here, and then this [part of his face] was painted purple. They would have tracking dots on so that they would then move the circuitry on my face and my musculature could move. You could still see me express things. ‘Cause we tried having full prosthetics that went over everything and we lost a lot of expression in the face. So thankfully, because that was really, really uncomfortable.

I have a question for James. You have always played the bad guy we love to hate in so many of your films.

Bad boys you love to hate. But with Ultron, is there any part of your humor in Ultron?

Okay. ‘Cause we definitely see your mannerisms.

PAUL BETTANY: And his world view, in fact. Global devastation and James’…

JAMES SPADER: I’m a great believer in chaos. But… but no, yes. I think that’s true in any film or television show or play or, anything you do. I think that if the casting works, you’ve been cast because that director intuitively knows that what they need, you’re going to be able to provide. And he [Joss] was specifically looking for that. He was looking for that sense of humor. He was looking for that irreverence in marriage with the other aspects. So he took advantage of it and we would play with things and I’d make a suggestion. But I really was very faithful to what he was writing because he was really writing it so specifically to me.

JAMES SPADER: And, and…

PAUL BETTANY: And if you’re looking for a James Spader type there’s not many places to go. There’s a one-stop shop.

JAMES SPADER: And I think the reason why he probably walked in to Kevin Feige and said, “James Spader’s who I’m thinking about for this and I don’t really have anyone else on the list,” is ’cause I think he probably, he’d already written to that. Um, so…

JAMES SPADER: Is that it? Oh my God. It seems like we should dump something else and just stay here for a little bit.

Both James and Paul were very entertaining. They had some excellent stories and much more than I have added here but there are a ton of other great bloggers who attended the junket who would have their on perspectives on the interview. I highlighted what was of most interest to me during the interview so please check out the #AvengersEvent hashtag on Twitter for some other posts from these other bloggers. Once all the posts are up I’ll probably link to them here.