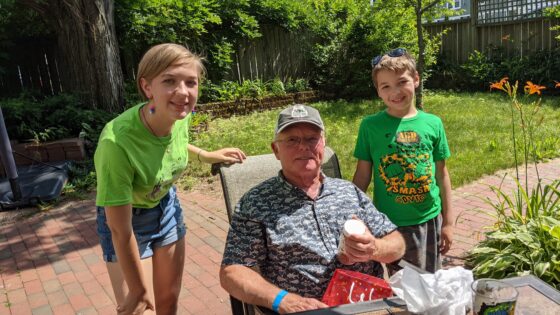 Today was one of those days that comes up once in a while when you work weekend overnights. We had a bunch of events happening today.

First up was the Dads Hitting Pads karate class at America’s Best Defense. At this event I was able to train with Andy. It was a lot of fun. There were a bunch of other dads there. It was great seeing other dads and their kids having such a fun time there. Master Garcia taught the class and he told us that his father never saw him doing karate until he got his black belt. I’m so glad that America’s Best Defense includes the family so much in everything they do.

After the karate class Andy and I went over to Dance Productions to see Eva’s recital. Last year was Eva’s 10th year but they did not have a recital so this year she was recognized for her 10 years at the studio. Her routine was to a song called Lost from The Lightning Thief: The Percy Jackson Musical. She took a class in theatrical dance this year and said that this was her favorite routine ever. My parents came up to watch as well.

After the recital we came home for a cookout and to celebrate Father’s Day with Grandfather. I picked up some burgers from Chartley Country Store. It was a delicious meal and a nice time spent with family. I had to cut out early, though so I could get a little sleep before another night of work. I lost sleep today but it was worth it to have a nice family day.