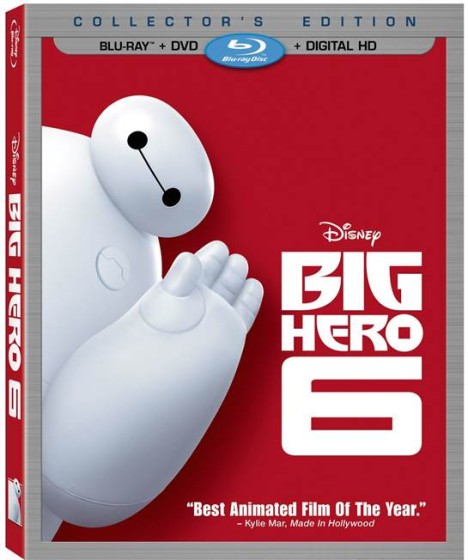 Over Christmas we took the kids to see Big Hero 6 in the theater. They absolutely loved it and cannot wait to see it again. Well, they won’t have to wait too long because Big Hero 6 is hitting Disney Movies Anywhere on February 3rd and on Blu-Ray/DVD Combo pack on February 24th. This was an amazing movie and I couldn’t wait to see it when it hit theaters but time and circumstance made me have to wait till Christmas to see it. I enjoyed it so very much and love the overall message, the action was incredible, too. I did happen to miss a bunch of Easter Eggs in the movie that had to do with Frozen, yes Frozen. Check this out.

More about the Big Hero 6 DMA and Blu-Ray/DVD Combo Release.

From Walt Disney Animation Studios (“Frozen,” “Wreck-It Ralph”), Disney’s “Big Hero 6” introduces you to a lovable robot who will change your world. Join Baymax (voice of Scott Adsit) and Hiro Hamada (voice of Ryan Potter) in a comic adventure that will make your heart soar as they learn about teamwork and becoming more than you thought you could be.

SYNOPSIS: With all the heart and humor audiences expect from Walt Disney Animation Studios, “Big Hero 6” is an action-packed comedy adventure that introduces Baymax, a lovable, personal companion robot, who forms a special bond with robotics prodigy Hiro Hamada. When a devastating turn of events catapults them into the midst of a dangerous plot unfolding in the streets of San Fransokyo, Hiro turns to Baymax and his diverse group of friends — adrenaline junkie Go Go Tomago, neatnik Wasabi, chemistry whiz Honey Lemon and fanboy Fred — who transform into a band of unlikely heroes. Bring home Disney’s “Big Hero 6,” featuring comic-book-style action and hilarious, unforgettable characters — it’s fun for the whole family!