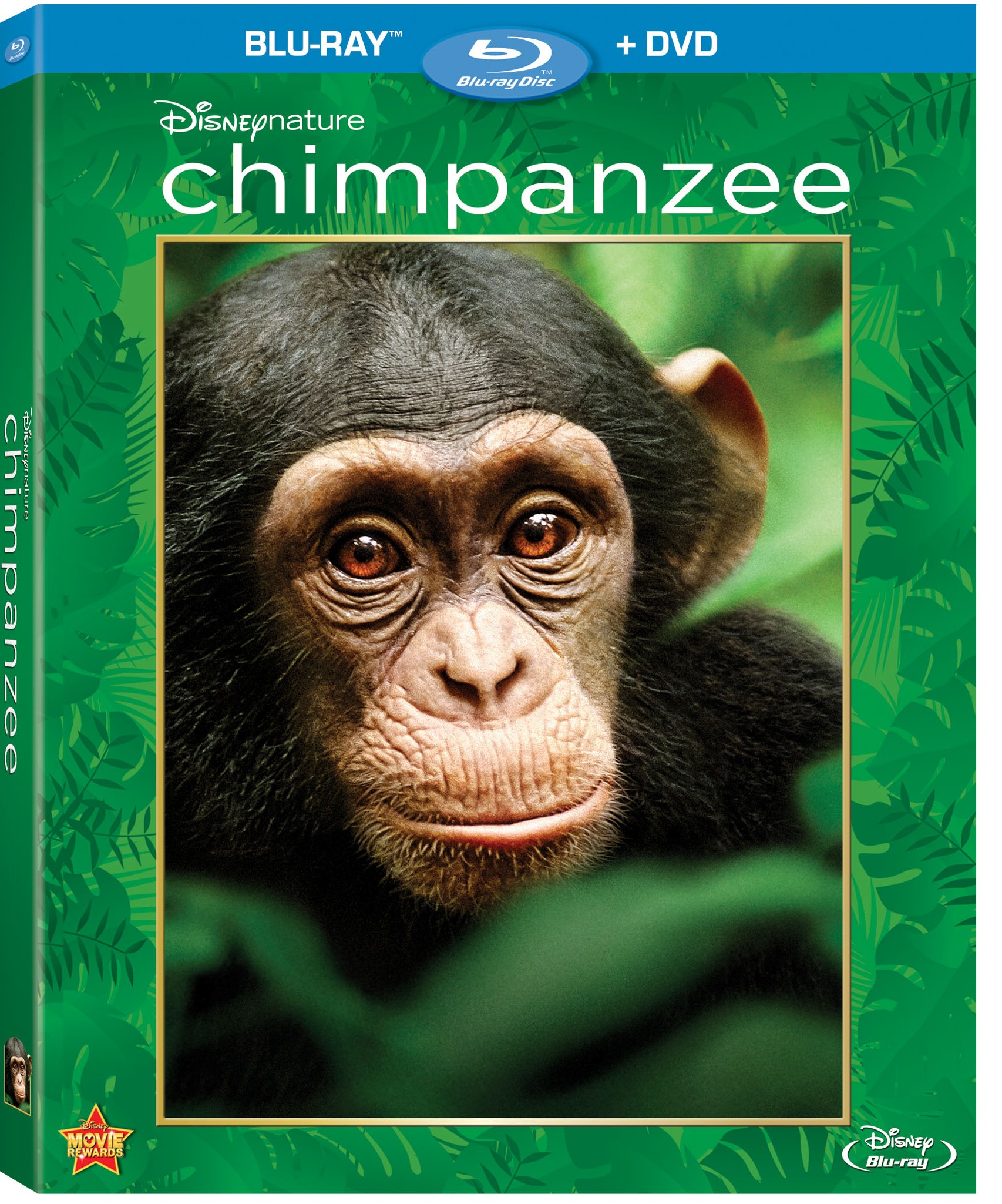 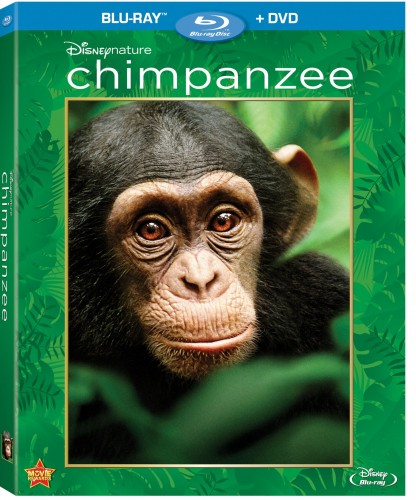 On August 21st Disney Nature released the movie Chimpanzee on DVD and Blu-ray. We weren’t able to watch it until this past Thursday. We were so wiped out from our trip to Story Land that we needed a rest and relaxation movie day. Allison was eagerly awaiting our chance to review this movie and she loved it. She got all teared up as she watched it with our little Eva who was asleep in her lap with a fever. Our little monkey (I know chimps aren’t monkeys) Andrew was all over the place until he finally slept. I was in and out of sleep myself but watched much of the movie plus all the bonus materials. I enjoyed it as well and it was visually amazing.

I had a much deeper appreciation of the scope of what went into making this movie after watching all the bonus materials. The work to bring this story to the screen was epic. One of the bonus videos shows how the team braved swarms of bees for two days to come away with 20 seconds of footage for the movie. It is a brilliant piece of cinematography and looks stunning on our TV too. I can’t believe what hardships were overcome to get that shot. Incredible.

Oscar was such a cute chimp and his story is something never seen before. Oscar is orphaned and would surely have died except the alpha male of the group took him in. This was something never before captured on film. It is actually unheard of happening as adult male chimps do not normally care for the babies of the group and the loss of a baby chimps mother almost always spells certain death for the baby. The bonding that takes place between Oscar and Frederick was so compelling.

Here is a portfolio of images from the movie.

Disneynature Will Donate a Portion of First-Week Sales to the Jane Goodall Institute Through the “See ‘Chimpanzee,’ Save Chimpanzees” Conservation Program

BURBANK, Calif. (June 22, 2012) — On August 21, 2012, Disneynature’s most unforgettable and heartwarming adventure yet, “Chimpanzee,” debuts as a Blu-ray™ Combo Pack (Blu-ray + DVD), Digital and On-Demand viewing. The inspiring film follows the True-Life Adventure of Oscar, a young chimpanzee whose curiosity and zest for life showcase the intelligence and ingenuity of some of the most extraordinary personalities in the animal kingdom.

To celebrate the in-home debut of “Chimpanzee,” Disneynature is proud to continue the “See ‘Chimpanzee,’ Save Chimpanzees” conservation program initiated with the film’s theatrical release. For every purchase of the movie through August 27, 2012, Disneynature will make a donation through the Disney Worldwide Conservation Fund to the Jane Goodall Institute (JGI) to conserve chimpanzee habitat, educate the next generation, and provide care for orphaned chimpanzees.

The conservation program tied to the theatrical release will help protect 129,236 acres (202 square miles) of wild chimpanzee habitat through infrastructure investments in the expanded Tchimpounga Nature Reserve in the Republic of Congo (Congo); educate 60,000 schoolchildren about chimpanzee conservation; and provide food and medicine for nearly all of the orphaned chimpanzees at JGI’s Tchimpounga chimpanzee sanctuary for at least the next year.

In addition to the remarkable story filmed in the depths of the African forest, the “Chimpanzee” Blu-ray Combo Pack is filled with spectacular bonus features, including in-depth behind-the-scenes footage showcasing the filmmakers’ amazing efforts to document the making of the film; a music video for the song “Rise,” written and performed by McClain Sisters; a feature on Disney’s conservation legacy; and much more.

Film Synopsis:
From Disneynature, the studio that brought you “Earth,” “Oceans,” and “African Cats,” comes “Chimpanzee” — a remarkable story of individual triumph and family bonds. Journey deep into the African forest and meet Oscar, an adorable young chimp with an entertaining approach to life. The world is a playground for little Oscar and his fellow young chimps who love creating mayhem. His playful curiosity and zest for discovery showcase the intelligence and ingenuity of some of the most extraordinary personalities in the animal kingdom. Stunning hi-definition images bring you up close and personal as Oscar and his family navigate the complex territory of the forest. It’s an inspiring and life-changing adventure that overflows with courage and charm. And it will capture your heart.

BLU-RAY:
Everything on the DVD, plus …

ABOUT THE JANE GOODALL INSTITUTE
Founded in 1977, the Jane Goodall Institute continues Dr. Goodall’s pioneering research on chimpanzee behavior started more than 50 years ago—research that transformed scientific perceptions of the relationship between humans and animals. Today, the Institute is a global leader in the effort to protect chimpanzees and their habitats. It also is widely recognized for establishing innovative community-centered conservation and development programs in Africa, and Jane Goodall’s Roots & Shoots, the global environmental and humanitarian program for youth of all ages, which has groups in more than 120 countries. For more information, please visit www.janegoodall.org.

ABOUT DISNEYNATURE
Disneynature was launched on Earth Day 2008 with the mission of bringing the world’s top nature filmmakers together to share a wide variety of wildlife stories on the big screen in order to engage, inspire, and entertain theatrical audiences everywhere. Walt Disney was a pioneer in wildlife filmmaking, producing 13 True-Life Adventure motion pictures between 1948 and 1960, which earned eight Academy Awards®. Earth (2009), Oceans (2010), African Cats (2011), and Chimpanzee (2012) are four of the top five highest overall grossing feature-length nature films to date, with Chimpanzee garnering a record-breaking opening weekend for the genre. Conservation has been a key pillar of the label, and Disneynature films empower the audience to help make a difference. Through donations tied to opening week attendance, Disneynature has planted 3 million trees in Brazil’s Atlantic Forest; established 40,000 acres of marine protected area in The Bahamas; protected 65,000 acres of savanna in Kenya; and contributed to efforts to educate schoolchildren, care for chimpanzees, and protect 129,236 acres of wild chimpanzee habitat in the Republic of Congo.

ABOUT THE WALT DISNEY STUDIOS
For more than 85 years, The Walt Disney Studios has been the foundation on which The Walt Disney Company was built. Today, the Studio brings quality movies, music and stage plays to consumers throughout the world. Feature films are released under the following banners: Disney, including Walt Disney Animation Studios and Pixar Animation Studios; Disneynature; Marvel Studios; and Touchstone Pictures, the banner under which live-action films from DreamWorks Studios are distributed. The Disney Music Group encompasses the Walt Disney Records and Hollywood Records labels, as well as Disney Music Publishing. The Disney Theatrical Group produces and licenses live events, including Disney On Broadway, Disney On Ice and Disney Live!

ABOUT THE “SEE ‘CHIMPANZEE’ SAVE CHIMPANZEES” CONSERVATION PROGRAM
Disneynature will contribute $.50 to the Jane Goodall Institute for the Disneynature Tchimpounga Nature Reserve Project per Blu-ray DVD Combo Pack and Digital purchase through August 27, 2012, with a minimum of $30,000 pledged to this program. Information concerning the Jane Goodall Institute can be obtained, without cost, by writing to JGI, 4245 North Fairfax Drive, Suite 600, Arlington, VA 22203, or by calling 703-682-9220, or by visiting www.janegoodall.org. This purchase is not tax deductible.