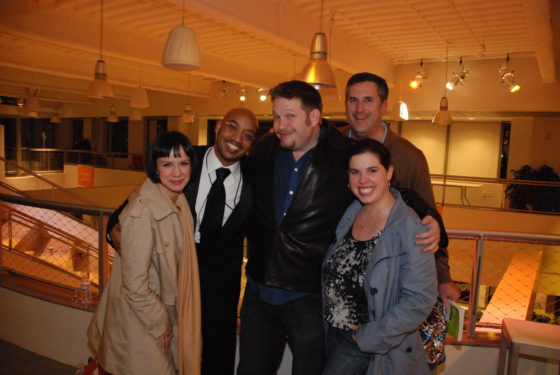 It is really fitting that today I hit a nice round number for my daily photos. It made it much easier to remember when I was talking to people about my Photo-A-Day project while at the BostonTweetUp MegaTweetUp. I have to thank Joselin Mane for throwing such a wonderful event. I met some very interesting people and also caught up with some friends that I’ve met previously. It was really fun. The MegaTweetUp was held at Microsoft NERD – One Memorial Drive – Cambridge, MA and it was a very cool space.

Getting to the event proved not as easy as I had anticipated. I recently got a Motorola DROID and I’d used the GPS on it before and it worked great (in North Attleboro). So when I set out from work to the event I only saw Searching for GPS the entire time. I could see the directions written out (very tiny writing) and so I watched that and followed the directions and true to form Google you gave me a right turn direction when a left turn was required. So, trusting the GPS proved my already anxiety ridden drive spiraled into frustration. But I ended up getting there a few minutes after the event started.

There were a ton of people at the event. I got into line to check in, which moved pretty smoothly. There were a few technical things that were odd including the fact that alcohol could only be consumed on floor 11 not floor 10. Not sure why and that was not known beforehand, but since I rarely drink it made no real difference to me and my Diet Coke drinking self. There were a few food choices like Legal Seafood Chowder (which was hidden but I found it), Boloco for inspired burritos (I even got a free burrito card and will check out the Natick location) and there was a huge spread from another location (I forget that one, sorry but good desserts and cookies).

I got myself a bowl of chowder and cruised the other food. I settled at a table and spent some time talking with Lisa Alloca from RedJavelin Communications. We talked for a little while and then I continued on up to the top level again and got myself a tiny baby burrito from Boloco. I consumed that and went back down. I wandered, a lot that first hour.

At first I wandered around taking pictures from the 50,000 foot view. I’m not that great at approaching people for photos. I was feeling a bit out of place so I tweeted.

“BenSpark: At the #megatweetup know no one here. Anyone in same boat come say hi to the guy w the autobot belt buckle and Nikon camera.”

Twitter was really hopping with people using the #megatweetup hashtag. You can follow the entire list of MegaTweetUp attendees too. A few moments later my tweet appeared on the giant screen of swirling whirling tweets. Because of that tweet I met quite a few very nice people. The first person that I met because of that was Georgiana Cohen. She works at Tufts and we talked about Higher Education, internet marketing and how they work together. I got out of Higher Ed before all of these very cool ways of socially interacting online. I remember back in 1997 trying to set up Yahoo groups and newsletters for my high school friends and college friends, now I have them all on lists in facebook and linked in. Things have changed. I decided to take a walk upstairs and I ran into Chris Brogan. I didn’t know that he was going to be at the event and even if he was still in the Boston area. We talked a bit and he introduced me to Zack(sp). I moved on around the upper part of the room and as I walked by a group one of the guys in the group asked me if I would take a shot of he and his friends. Here I met Kels Ferguson, a Vocalist & Brass Player for a rock band, she is also a big Superman fan and Christine Morris, a Vocalist and Men’s Fashion Consultant (she said I was actually pretty well put together last night even with the Autobot belt buckle) and a few other folks (I apologize for not remembering names, I didn’t have a business card from you). Kels mentioned that she liked my belt buckle and so did a few other people in the group. I talked with this group for a while and they were really nice. It was such a diverse group of people at this event and I thoroughly enjoyed learning more from each person. I would run into Kels and Christine again throughout the night. Kels even told me a cool site called How It Should Have Ended. I need to check it out.

My path crossed again with Chris Brogan and this time I talked with him a bit about the DROID and I also met David Meiselman who works in Online Marketing and Social Media for Insurance companies. We talked for a bit and then I went downstairs.

Back downstairs I walked be someone who looked very familiar. Come to find out she used to work where I work and we would talk about blogs and social media from time to time when she was here. It was Megan Capone, founder of A Girl Must Shop. She made the jump and is doing well with her site, A Girl Must Shop. We talked for a bit, caught up and I need to follow up with her about IZEA.

I walked around a bit more and took some photos of the people who were being interviewed by Black Screen Studios. While I was doing that I met Tara Greco the Executive Producer. We talked for a bit and she told me all about the studio and their specialty in special effects and animations. I can’t wait to see what they start producing and would love to tour the facility and meet people there (I forgot to mention that while we talked). While we were talking the raffle started and there were over $4,000 worth of items in the raffle including pokens from PokenGirl. I said goodbye to Tara and moved to the front of the staircase to take some photos.

There I met Mari Anne Snow the Ceo & co-founder of SophiaThink. Mari does social media consulting for companies and I found her drive inspiring, setting out with a partner and creating a company, great work. I hope to talk with her more. As we were talking the prizes were being drawn and I was taking a few shots of the winners.

Joselin was really great about getting each person to turn and pose with the things that they won. There were gift certificates, Celtics Tickets and many, many books. I myself won a $100 Go Green Consultation from Plan-It Green. I haven’t looked at what that is all about yet so I’m anxious to see more about it.

Another raffle ticket of mine was pulled however this was pulled after someone didn’t claim their prize so as it was pulled the person came down and my number got tossed to the side. I’m not sure what I would have won but no biggie, I won something so it’s cool. I took photos of every person who won prizes and there were a few other people who were doing this as well. Eventually I found myself the only person still taking photos as the raffle went on. So I sort of became the unofficial raffle prize winner photographer. It was very fun to use my skills to help out.

After the raffle I hung around for a bit and talked with Joselin about tweetups. I told him all about Blogs, Brews and Belly Laughs and he said that next time I do one of those to let him know so it can get on the calendar. I hope that people would be interested in venturing out of Boston and into the burbs to enjoy the show. I also took a few more photos and then headed home.

In the parking garage I was parked next to Wayne Kurtzman of BeyondThe.Biz. We chatted about the DROID and my likes and dislikes.

Speaking of dislikes, I still didn’t have the GPS on the DROID so I found the only route # I could find and followed it, so I went home by way of Arlington. Along the way the power on my DROID died and I had no phone so a car charger will certainly be a future purchase and I’ll hit up the folks at foneGEAR to pick one of those up, I should have gotten two instead of the wire that connects the EnV to the computer, because that is no longer useful to me.

But, even though I was lost and confused I still headed home with a head buzzing with ideas and the excitement of seeing old friends and meeting a bunch of new friends.

To view all the Photos I took at the event Please take a look at my BostonTweetUp MegaTweetUp Set on Flickr.