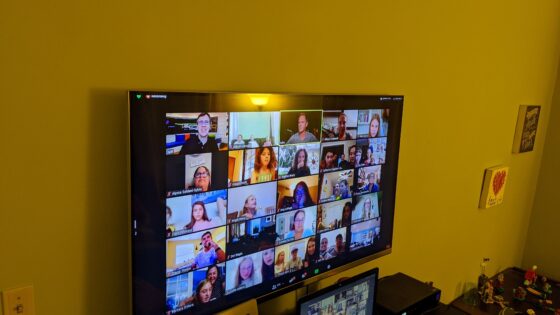 Tonight, our local bookstore An Unlikely Story had two events that we attended virtually. The first was a conversation between Jeff Kinney the author of Diary of a Wimpy Kid and owner of An Unlikely Story and Neil Patrick Harris. Neil was talking about his new book The Magic Misfits: The Fourth Suit. To be honest, I did not know that he was an author. I’d never heard of the series before and now that I know about it I want to get the series for the kids so that they can read the rest of the books. We will be getting a copy of the 4th book that was recently released.

The virtual event was a lot of fun. Neil was excellent and the banter back and forth with Jeff was fun. Then Neil opened it up for questions and we got to see all the people on Zoom. Neil asked that we turn on our cameras and there we were smack dab between Jeff and Neil on the screen. We were in Allison’s profile so her name was on the screen but my face was what you saw when I turned on the camera. Neil sees this and says, “Allison what a beard you have” We start laughing and then he says that he wants to talk with some people. He unmuted us and talked to us. He asked everyone’s names and then asked if we had a question for him. He asked me directly to ask a question and I totally choked. So he moved on to Eva and she asked a really good question and Neil said, “Now that’s how you ask a question.” I was dying. 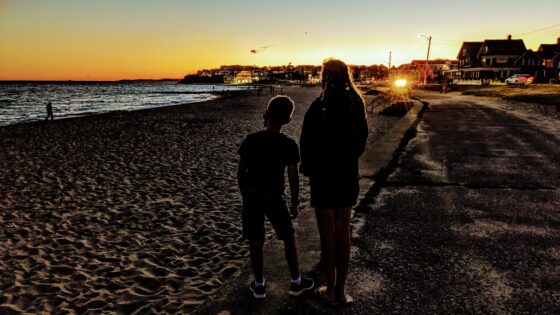 The Summer is over and we enjoyed ourselves on the Cape a lot. Despite there being a pandemic and having to quarantine throughout the year we were fortunate enough to be able to be down the Cape and visit with my parents multiple times. This was the first year in a long time that I have had Labor Day Weekend off. In the past we have gone to King Richard’s Faire but that isn’t happening this year. Instead we went down for a few days of rest and relaxation by the beach. We had beautiful weather and so Allison and I were able to walk each morning along Great Bay which is her happy place. Even when she wasn’t feeling too up to walking she still wanted to make sure that she got to walk along that stretch. It is a beautiful walk.

The beach was a bit crazy today because there was a Trump rally on the water so about 100 boats drove by with their Trump banners and such. Some people waved from the beach and supported them and others did not. It was a crazy thing to round the corner at the beach and see hundreds of boats out on the water and have no idea why. I immediately thought Trump rally because of the whole my boat is bigger than your boat mentality. And wow, I was right. The rally went by twice and then was gone, we enjoyed a rather peaceful beach day despite that bit of excitement.

The kids enjoyed their beach time, Andy is a fish who never wants to get out of the water. Eva is spending a little less time at the beach overall. She is now old enough to walk back to the house and stay if she’d rather do that. She found other ways to occupy her time.

We had a nice meal tonight of some boneless pork ribs that we made on the grill. It was a nice night and then we walked along the beach and got a photo of the kids together on the beach. We did not get or Woods Hole photo after the Science School cookout out this time around but this was nice too.