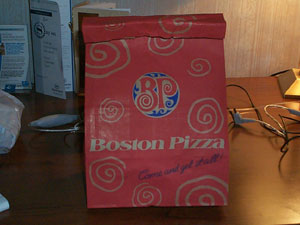 So, here in Vancouver there is a strange thing that I just had to experience, Boston Pizza. They are everywhere. I went to Boston Pizza last night for dinner just to go there and check it out. Expecting a Boston themed restaurant I was surprised not to find any Boston decorations or anything. It’s just them name of the place.

It made me laugh to see, Boston Pizza rather than New York or Chicago Pizza, because frankly pizza is not what I associate with Boston, no matter how many times I’ve been to the North End. The only references I saw to Boston were on the menu, I had the Boston Royal Pizza, (Pepperoni, Ham, Peppers, Mushrooms, Olives, Onions and Shrimp.) Weird. They also have a Boston Extreme Heat sauce for the wings, which were not at all as good as the wings at Montana’s (Which by the way was themed like a lodge in Montana.)

Despite the false advertising of this restaurant having anything to do with Boston the pizza was actually decent.

So this is the hospital that I’ve been working at for the past week. It is a pretty hospital. The rooms for patients are huge suites. There are 40 suites so far, the hospital will be adding more as time goes by too. They are going to be expanding over time. They are still putting the finishing touches on everything and that is a little weird but things seem to be going okay so far. I spent much of the day building reports and other dictionary things. For lunch I had a really good pulled pork sandwich at a BBQ joint., so it’s all good. 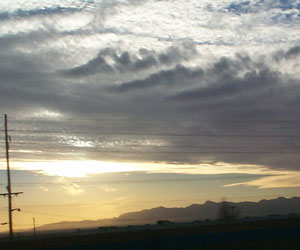 This is a shot from the car while I was driving from the hospital to the hotel. Isn’t the sky awesome. If it wasn’t for the dust and smog in the air the sunsets and sky would be so incredible. The nights are pretty clear and the moon has been pretty full this week. So that has also been a great sight.

Tonight I went to dinner with another specialist Laura to Jaxon’s Restaurant. They are a Micro brew. I got a sampler of their beers. 8 little 1 ounce glasses of each beer. A nice assortment. Very tasty. If you go to El Paso I’d stop there for dinner or drinks.