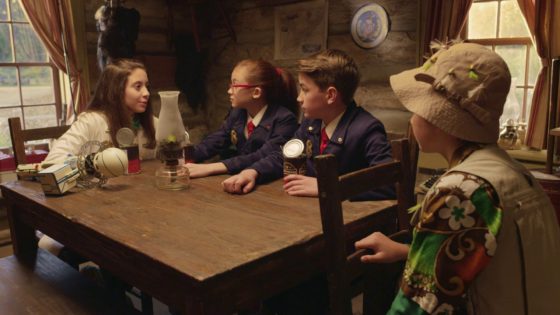 ODD SQUAD is one of our favorite shows to watch as a family. This is one of the funniest kids shows on TV. The kids are also learning great math skills while they watch so I am happy when the kids choose to watch the show together. These ODD SQUAD movies are also very fun to watch. Our favorite one was when the older team worked with the new team. I don’t know if the cast is going to rotate again but it makes sense because the kids will age out of the show. You can learn more about the movie ODD SQUAD: WORLD TURNED ODD which premieres on January 15th on PBS.

“We hear from families often about what an impact ODD SQUAD has had on them, and how much they enjoy watching it together,” said Lesli Rotenberg, Senior Vice President and General Manager, Children’s Media and Education, PBS. “With ODD SQUAD: WORLD TURNED ODD, we hope kids and parents continue to laugh and learn together as Agents Otis and Olympia use math and problem-solving to face their newest challenge.” END_OF_DOCUMENT_TOKEN_TO_BE_REPLACED

A while back I posted about WILD ALASKA LIVE. This is an event on PBS that will be hosted by Chris and Martin Kratt, the Kratt Brothers. WILD ALASKA LIVE will premiere Sunday, July 23 at 8pm ET. Then Over three nights (July 23, 26 and 30), PBS will turn the cameras on a must-see natural spectacle as thousands of animals like bears, wolves, beavers, moose, orcas and eagles, gather to take part in Alaska’s amazing summer feast. Think of it as the world’s greatest vacation, without having to leave your couch or making the kids put on their mittens.

For an ultimate family experience, WILD ALASKA LIVE will also be simulcast on the new PBS KIDS 24/7 channel and via live stream. Also be sure to tune into two new WILD KRATTS one-hour specials — WILD KRATTS: Creatures of the Deep Sea (July 23) and the all-new WILD KRATTS Alaska: Hero’s Journey (July 26 and 30).

This is a must-see family viewing event. Here is a video teaser with the Kratt Brothers.