Tomorrow night Angel is ending. It has been a good 5 year run but now the show is over. I hope the episode lives up to what we’ve come to expect from the mind of Joss Whedon. 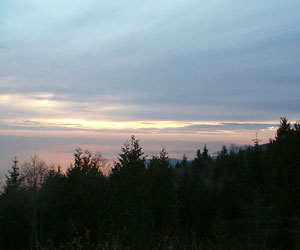 Today was my last day in Vancouver for my first trip out here for the an implementation job. It was a pretty interesting trip despite the weather and it being very dark most of the time. I did get to see some sun and some stars. Today Smallville was still filming at the hospital and I was able to see Tom Welling and Kristin Kreuk film a scene.

I wasn’t close enough to hear them but I knew they were filming a scene because there were dozens of people around yelling filming type things like “speed” “action” “rolling” and “cut”. I don’t know where the camera was but I was right behind them so the camera was probably behind me and didn’t get me in the shot, but who knows stranger things have happened. So watch Smallville on March 2 for episode “Resurrection”.

After training I went for a drive down Vancouver’s Route one up to a mountain. It was still pretty foggy and lots of clouds but the sun and the clouds made for an interesting photo. Enjoy. Maybe next time I come out here things will be much brighter and I can get some photos of the mountains that I could see from my hotel room for all of 5 minutes.

I also just finished my Firefly DVD’s. Man that was an awesome show that never should have been canceled. Hopefully it will live on in a feature film as well as some novels like the Buffy books and Angel books. I can’t wait for the first Firefly book. That will be awesome. Anyway, I’m sitting in the airport and will post this message probably tomorrow when I arrive home. Since I won’t be leaving till 11:30pm and won’t be arriving until 10:00am. Bit of a long flight… To say the least.