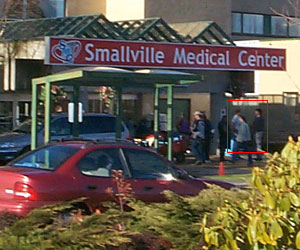 I’m in Langley, BC and this morning when I arrived at Langley hospital I saw that it was transformed into Smallville Medical Center. I learned that Smallville is filmed in Cloverdale, BC. That is a little ways away from Langley. It was a rare treat for me to see the film company setting up for a scene that will be part of and episode called “Resurrection” that will be airing here in BC on March 2, 2004.

During lunch I took a walk around the front of the building to see how the production was going. And while I was standing there and checking out the set up I took a few pictures. And as I waited I saw the arrival of John Schneider (Jonathan Kent) and Tom Welling (Clark Kent). I even took a picture but I was very far away from them to get a decent photo. But that is them in the red box.

The scene that they are filming is a simulated bomb threat and evacuation from the Smallville Medical Center. The room that I am conducting training in is right next to the room where all the extras are hanging out. So It’s pretty exciting. I guess that many of the hospitals actually subsidize their fund raising by letting film companies film at the hospital. So to everyone I’m training this is pretty old hat. But I’m the starstruck one.

I had wondered if I would be seeing any stars while I was in Canada. Seeing as this is an area where this are a lot of movies and TV shows being filmed. Here is another site for Smallville. 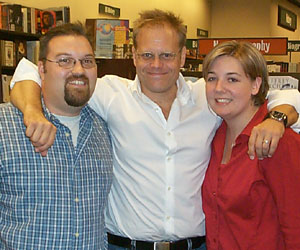