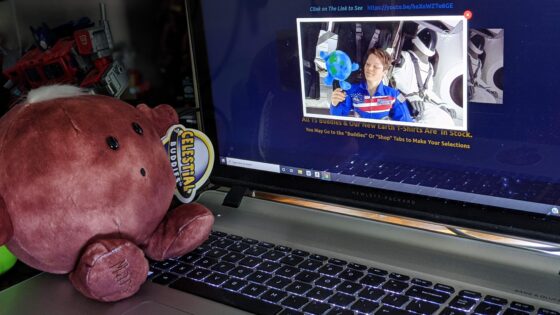 I was offered my own Celestial Buddy for free to check out and review. I choose Mars because that is where I hope to see us go next.

It has been an out of this world ride for one plush little Earth from Celestial Buddies. Back in March a plush Earth toy from Celestial Buddies was launched with Crew Dragon to the International Space Station. It quickly captured the hearts and minds of children everywhere and also those young at heart. Now, Little Earth is coming home with the crew on today’s launch. Full details of the journey are in the press release below.

We will watch the live feed of the launch with the kids in a couple of hours and I truly hope that they will feel a sense of wonder at the possibilities by watching this historic launch. This is the first time a space ship will launch Americans into Space from America. The next step would be to go back to The Moon but ultimately a journey to Mars. So that is why I choose the Mars Celestial Buddy, that and Aries is my sign.

The plush is adorable and has a special tag that tells facts about the red planet. I think that a toy like this makes the idea of space more accessible to a child at a young age and plus, it is an adorable plush! I have added some of my Amazon.com affiliate links below so that you can orders your own if you are so inclined.

Guilford, CT (May 26, 2020) – The term “what goes up must come down” suggests that things that rise must eventually return to the earth due to gravity. Toymaker Celestial Buddies knows this all too well as one of their plush is currently in outer space but hitching a ride home, thanks to NASA!

The round toy with an outline of planet Earth’s green land and blue seas had been added as a last-minute installment during SpaceX’s Demo-1 mission last year to serve as a “super high tech zero-g indicator,” according to SpaceX CEO Elon Musk when he alerted his followers via Twitter hours before the uncrewed launch of the Crew Dragon capsule.

As Florida Today, part of USA Today news network, reported, “Throughout the course of SpaceX’s Demo-1 mission, “Earthy,” or “Little Earth” as the toy eventually became coined spent its time with the astronauts aboard the International Space Station.”

“With daily updates of the plush planet’s time in space provided by NASA astronaut Anne McClain — who served on Expedition 58 and 59 — eyes everywhere watched as “Earthy” learned how to measure space growth, have candlelight dinners with other plush figures and even worked out with the astronauts.”

Celestial Buddies’ adventures in space began last year. On the evening of March 1, 2019, SpaceX President Elon Musk surprised the world by tweeting that he was sending a “super hi-tech zero gravity indicator” on board the Crew Dragon Spacecraft bound for the International Space Station the following morning. In the wee hours of March 2, television viewers were treated to the sight of a blue and green plush toy Earth floating in the cabin, soon to be welcomed to the Space Station by American Astronaut Anne McClain. She in turn was succeeded by Christina Koch, who spent a record 328 days on board with Little Earth ($21.99), the cuddly planetary plush from Celestial Buddies that defied both gravity and zero gravity in going where no plush had ever gone before.

Now kids quarantined in spaces perhaps as tight as the Space Station can find comfort and knowledge with these playful pals that introduce youngsters to the Moon and beyond.

Best sellers 6” Earth, Moon, Mars ($21.99 each) and 8” Sun ($29.99) are part of a collection of 15 soft plush pals, each with a story to tell. “I am a hot shot, full of energy!” boasts Sun. Kids quickly discover that the world literally revolves around him! “I am the star located at the center of your Solar System and I am one among an estimated 200-400 billion stars orbiting in the Milky Way Galaxy. All my energy is produced in my core by nuclear fusion. This energy travels to the surface and is emitted as visible light reaching the Earth in 8 minutes.”

In addition to Sun, Moon and the traditional nine planets (Yes, we still like to think of Pluto as a planet), Celestial Buddies features Polaris, Comet and Black Hole. Like the planets themselves, the plushes come in different sizes and colors that emphasize each celestial body’s special character. Perfect for holding in the palm of a child’s hand, the round cuddly pals range in size from a softball to a soccer ball. More than just a toy, they encourage age-appropriate exploration of outer space.

“Most Solar System toys focus on the scientific and are mainly mobiles and models geared towards older kids who are science buffs,” explains toy creator Jessie Silbert, a 2020 Wonder Women in Toys (WIT) Finalist.

“Celestial Buddies are entirely different — they are cute, cuddly, personable, but also educational . . . traits which I hope will appeal
to a wide audience.”

Space and exploration will get a wider audience on May 27 when two NASA astronauts lift off from U.S. soil for the first time in nine years. The journey to the International Space Station will be on a SpaceX Crew Dragon spacecraft.

Back at home, inquisitive youngsters can cuddle with their Celestial Buddies while being introduced to the concepts of astronomy, physics and aeronautics. Parents who have discovered these adorable plush happily share their glee online at Amazon:

This was an excellent gift for my planet-obsessed son’s 3rd birthday. Most space-themed toys are clearly only designed for older children, but the simplicity of this design makes it work well for all ages. The planet body has a soft plush outer layer, but the filling is dense and a little heavier than you would expect for a stuffed animal (but definitely not too heavy for any child). This gives it a feeling of sturdiness and substance, which is great for children with sensory challenges. The hands and feet are softer and more squishy.

We bought the Celestial Buddy Moon for our 3.5-year-old daughter. She is fascinated by stars, planets, and all things space. But the Moon is her favorite. These things are adorable! We have Mars and Earth also. When our daughter got it, she hugged him so tight…she was thrilled! Of course, she wants every single one. Just as a side note here…the Black Hole Celestial Buddy….you can fit all of them inside it, from what I understand…. too cute!

First, I will say that the Celestial Buddies are terrific. So much better than yet another dog or bunny. We have a number of other celestial buddies stuffies, which we purchase to mark major celestial events (solstice, eclipse, etc.). We bought this one, the black hole, to recognize scientists’ latest achievement: capturing an image of a black hole.

Toymaker Celestial Buddies was looking for a gentle approach to the grownup topic of climate change when they created Our Precious Planet, with a diameter of 9 inches. The enchanting plush features a more detailed and realistic depiction of Earth’s continents than their original 6” Earth pal. The toy comes with an educational tag depicting some of the causes of global warming — such as car exhaust, deforestation and smog — on one side, and on the other, ways that people can help — like using solar panels, riding bicycles and turning off lights.

“Consistent with our mission to both enlighten and delight, this special edition buddy is a gentle introduction to a very complicated but also very important subject,” explained Jonathan Silbert, a retired judge and father of the collection’s creator. As an educational toy company, Celestial Buddies feel a responsibility to address the issue.

“We should give our families and educators a tool to help promote healthy discussions with our children about this important issue,” he added.

Educators are given a special discount with any purchase. Celestial Buddies offers teachers and educational institutions a 20% discount for the purchase of a complete set of Buddies and a 10% discount on smaller quantities. Note that to obtain these discounts, teachers will need to use a bona fide educational institution as the shipping address. Email the toy company at sales@celestialbuddies.com to obtain the appropriate coupon codes.

Available online at their company website https://www.celestialbuddies.com/ and at Amazon, look for a description of each heavenly personality from Earth to Pluto’s moon Charon and back!

About Celestial Buddies
Celestial Buddies is an original line of plush characters each personifying a celestial body occupying the heavens. The Celestial Buddies’ “Big Bang” moment occurred after the creator of this miniature stuffed universe saw a documentary series on the Solar System and realized that there were no plush toys depicted Earth’s planetary neighbors. So, she set to work, and Celestial Buddies is the result. Discover all 15 buddies at https://www.celestialbuddies.com/.