Last night Allison and I were at Elise and Charles’ for a cook out with some of Allison’s college friends. Emily arrived first and was soon followed by Jen and her son Brett. Brett was a little cutie, with a set of lungs on him. He’s 3 or 4 months old, very new and all. We missed seeing Ben (Jen’s husband and Brett’s dad), and hope to see him on another trip down the road. Then Erin and Rob came. Erin and Rob are fellow bloggers, Rob has had his blog for a very long time. Each time he changes it he gives it another number, he’s up to #7 now.

The girls had fun taking turns holding Brett and trying to get him to stop crying, Charles and I were pretty good at making him smile. Brett has the funkiest hair, Not one of my pictures really captured it very well. But his hair stands straight up and is very long.

We had a great meal with tons of food, shish-k-bobs with beef or chicken, mushrooms, zucchini, potatoes, and eggplant. I was a fan of all but the eggplant, I just don’t like it and never mind the fact that for much of my childhood I thought it was a plant that was similar to a cadbury egg. I thought that if an eggplant was cut open it would be like a hard boiled egg inside. I don’t know why I thought this but I did. And that has been a mental block on my enjoyment of the vegetable.

For dessert we had an ice cream cake and Nacho Mama’s S’mores. The ice cream cake was picked up as a congratulations for Erin and Rob’s engagement. We got the supermarket to write Congrad Erin and Rob, not intentionally mind you. We wanted it to say congrats but, and we should have checked, the woman in the bakery apparently could not spell correctly. So back at the house Allison and Elise tried to make the D into a T. I found it funny that she only wrote Congrad and not Congrads.

Nacho Mama’s S’mores is a dessert that I’ve been dying to make ever since I saw Ham on the Street on the food network where George Duran made these in a cast iron skillet on the campfire. The idea is that you can make a plate of smores that eats like a plate of nachos, it gets everyone excited and involved in sharing the dessert. I know that you purists out there may not like Nacho Mama’s S’mores because it takes the fun out of roasting the marshmallows, but it is fun to make and fun to eat. Here is the recipe. (from the Food Network Site: Original Page)

Show: Ham on the Street
Episode: The Great Outdoors

Break the graham crackers into pieces and place a layer in the bottom of a cast iron skillet. Break up the chocolate bars and put a layer on top of the crackers. Now add another layer of crackers and chocolate. Evenly distribute the marshmallows over it all. Place the skillet in a corner of the campfire, rotating the pan 1/4 turn every 3 minutes, until the chocolate is melted and the marshmallow are golden brown, about 12 minutes. Be sure to protect your hands from the fire at all times.

Alternately, the S’mores can be made in a pie pan in a preheated 250 degree F oven until the chocolate and marshmallows melt.

After the Nacho Mama’s S’mores I fell into a S’mores coma and had a good night’s sleep. I did however; manage to get some pictures before the coma. 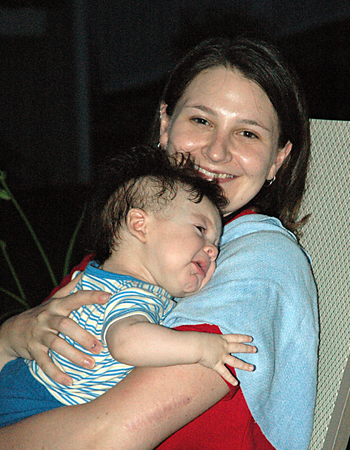 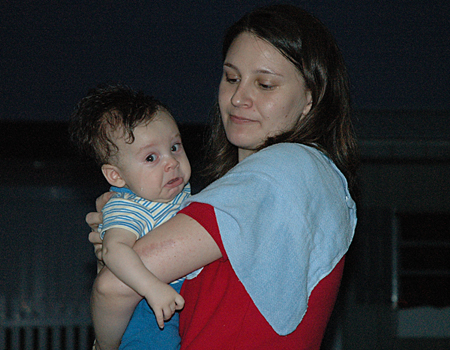 I love Brett’s expression, he got distracted by the flash and stopped crying. I didn’t want to give the poor kid a seizure so I had to stop taking pictures. 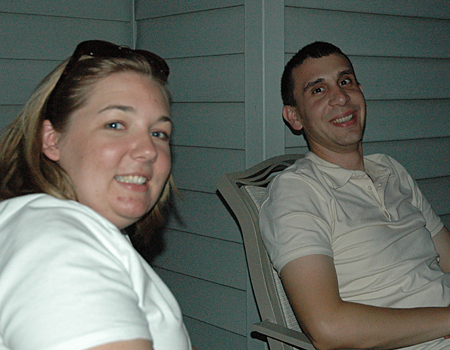 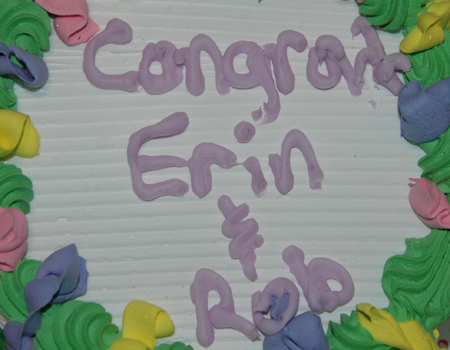 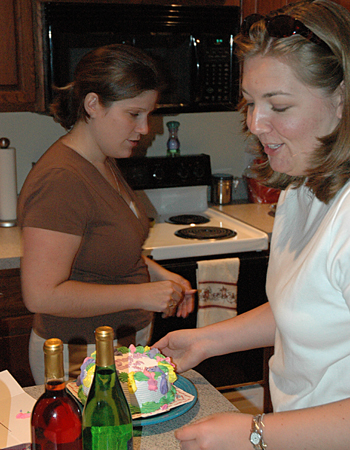 Fix it quick, Allison and Elise perform spellcheck on the cake. 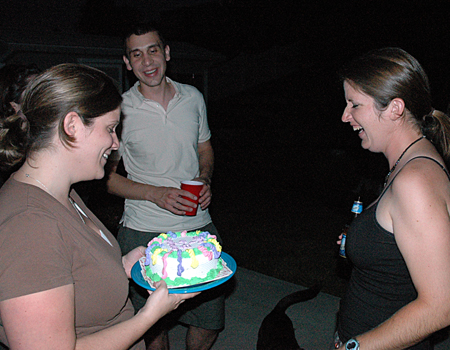 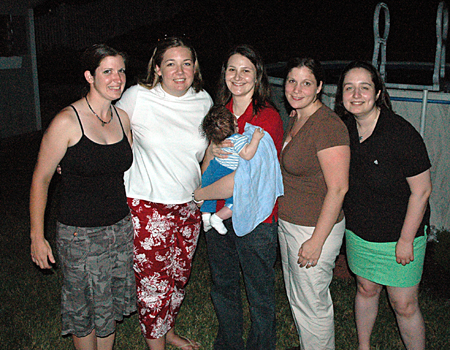 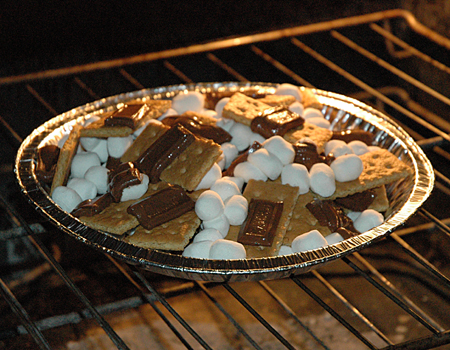