Trying to figure out Christmas gifts for Andrew have proven more challenging than expected. The main reason is that we already have a ton of toys from when Eva was a baby. Some of those toys Andrew has never seen. So, how bad would it be if we wrapped them up for him to reopen? We certainly don’t need a ton more toys in the house. However, I did find these little cars from Fisher Price. Even better they are little super heroes. I did see something that I think would be great for Andrew and it would be just for him. 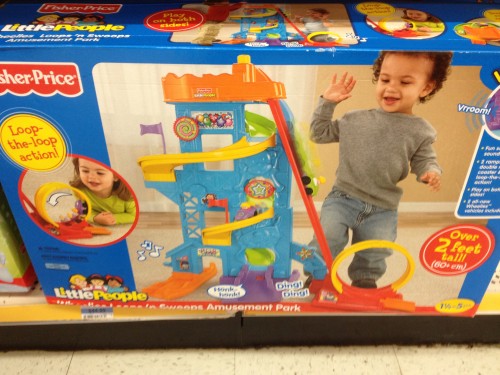 I took Andrew with me today to run a few errands. He was so adorable in his little Moose hat. We dropped by a few places like KMart, Wild Time Comics, Toys R Us and Sears. We were on the hunt for the Wii U Deluxe but no one has it. I was in Toys R Us earlier this week and they were holding one for someone. The kid there said to call on Wednesday because they’d be getting some shipments this week and if they had one they’d hold one if I called. I called three times today and they did not get any in stock. I even went in because, well no one talks to anyone else so I don’t always trust Toys R Us. I end up being more frustrated than anything else when I deal with them. I’m kind of hoping that I find the Wii U Deluxe in some other store so I can return the Wii U Basic to them.

The trouble with Toys R Us is that they get so many exclusive toys. They also charge more than stores like Target and Walmart. Then they have bizarre rules for their sales.