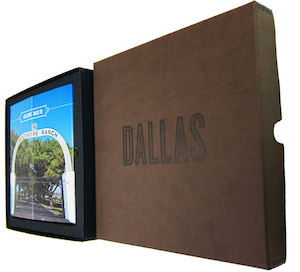 The other day I received a package. It was tossed onto the porch and Allison said to me. That box is singing? Singing? That is strange. So I opened the box and inside was a screener for the upcoming Dallas show on TNT. It was the coolest presentation for a new show that I’ve seen in a while. A faux leather cover and inside when you open up the container it played the theme from the original Dallas. I remember hearing that as a kid but never watching it because I was 3 when it first aired. It was a prime time soap opera for adults so I had little connection with it. When I was offered this screener I turned it down at first. Then when I was at Blog World Expo I caught up with the folks from social Chorus and they asked me again. I said sure, send me a screener and I’ll take a look at the first episode and see what I think. Well, I watched the first episode. Here’s what I think.

I watched the first episode with Allison. Since she is even younger than me she had even less of an idea about the show and who the characters are. I could follow along pretty well because I just eat up pop culture. The who shot J.R. storyline was one of the biggest events in TV history and when Bobby Ewing died and then came back at the end of a season it was such groundbreaking and rule breaking in television that it hooked people in. The original show was on for fourteen seasons so there is a rich history to mine from. There are so many people that could be called back and if you weren’t a fan of the show you might miss who people are and their significance in the whole scheme of things. That being said the show was decent.

I think that the first episode set up the series very well. The blend of the old guard and the new guard into the episode was also done well. The new series picks up 20 years after the original series ended. The Ewing family is still struggling for control of South Fork. Old wounds and feuds are still deep and painful while new allegiances, schemes and backstabbing are still running rampant. From the original series we have Patrick Duffy as Bobby Ewing, the younger idealistic brother to J.R. Ewing. Bobby has a new wife, Ann Ewing, his third wife. J.R. and Sue Ellen have divorced but both characters are part of the show. For the new characters we have John Ross, the son of J.R. who is all the manipulative, conniving back stabber as his father is without the years of experience. John Ross is determined to drill on South Fork against the wishes and The Will of Miss Ellie. Christopher Ewing is the adopted song of Bobby Ewing has good intentions and is searching for alternative fuel options to make his fortune. Christopher and John Ross are at odds as are their parents at the heart of it is a woman. That woman is John Ross’s girlfriend, Elena who is the daughter of the cook at South Fork grew up with with both Christopher and John Ross. Elena was engaged to marry Christopher at one time and the wounds there are deep. Of course there is another woman in the picture, Christopher’s new fiance, Rebecca. With all the family history and the heartache, double crossing and triple crossing this show will have plenty of surprises and be pretty entertaining to watch this family again.

Some of the best moments of the show came from J.R. Ewing. He’s such an iconic character and was a force of nature in the original show that his reintroduction was pretty fun.

DALLAS returns in a Two-Hour Series Premiere Wednesday, June 13 at 9/8c on TNT.