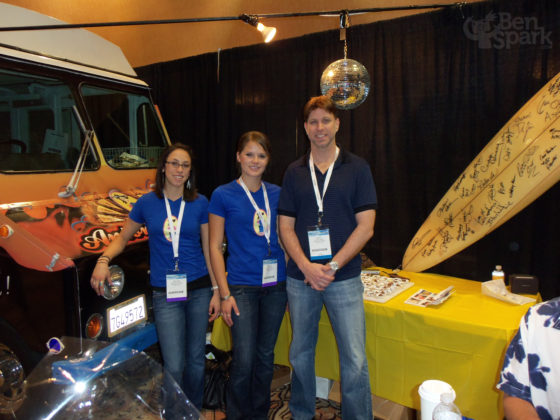 Today was the last day of Blog World Expo and I don’t think I was the best conference attendee today. I woke up and just hung around the room for a while in the morning not really motivated to go see the opening day keynote. I wasn’t hung over or anything like that, I was just not motivated. That and I figure I can go watch the keynotes later when I am up for absorbing the knowledge from them. Sure, it is not the same as being there but I just was not into it today.

I headed down to the show a little after the keynote had started, had some breakfast, Fruit Loops and Rice Krispies. How I thought Fruit Loops would be a good choice after watching Ted, The Human Cereal Bowl, sit in them yesterday and even pour some on him to boot, is anybodies’ guess. So I had that and got a cup of illegal coffee for Lisa Picarille and she interviewed me for Affiliate Summit or something for Shawn Collins to hang on to, or maybe even something for their podcast, Affiliate Thing. I don’t know but I wonder how it came out.

I sort of bounced around the exhibit floor for a while and this time trying to go to more than two of the exhibits. I am finding that I really need a partner of some sort where we can strategically map out what we are going to attend and how we are going to cover events like blog world because I got a little overwhelmed with how I was not in six places at once. I lost track of time and missed most of Ted Murphy’s session Back to Big, which was a hands on session, a type of session I love. But I did get over there, however not before finally getting up the courage to ask Darren Rowse if he’s be interested in being on the Photo-A-Day Podcast.

Ted’s session was a good one but not well attended. I know how that can be, but Ted is a pro and kept his motivation high. He had the group pair off and come up with an iPhone app. There were about six teams of two and we all came up with something pretty interesting in a very short period of time. Ted showed us how no matter how much technology we have we can easily go to the low tech tools and our imaginations to make some of the best things. I really enjoyed the session and wish I had better track of my tie and didn’t miss the beginning.

After that I grabbed lunch because I didn’t want a repeat of yesterday. I had a nice lunch with Stephanie Schwab whom I met at the EVO Conference in June. I had to leave lunch early because I was catching up with Melissa Murphy from YouCast to get some swag from the TV show LEVERAGE. I’ll be doing a few more posts about that show and hopefully be able to give away some cool prizes again. Melissa and I finally connected and she gave me a copy of Stephanie Agresta and Bonin Bough’s book “Perspectives on Social Media Marketing”. I then got that signed and had my photo taken with Bonin. You Might notice the shirt that I am wearing. I got that from the guys at Man of the House at the M3 Summit. I took it with me and I just wasn’t feeling like wearing the BenSpark.com shirt all day so I wore their shirt. You can only imagine how many people asked me if I was working with Man of the House. Those guys have a great buzz going and I would love to do some writing for them at some point. Maybe we can make that happen.

After meeting Melissa and Jessica from YouCast I headed back to my room because I needed to drop off a box that I got from GourmetGiftBaskets.com. It was a great gift basket with one of my favorite tings inside, pretzel dipping mustard from Stonewall Kitchen. Yum. So I headed up towards the escalators and stopped at the area where UPS was giving out their special luggage boxes so that people could ship things home for free from the conference. I debated about it but in the end picked on up to go and pack and bring back down.

As I was heading to the up escalator I spotted Sara and Lee O’Donnell of Average Betty! I was so excited and shouted up to Sara and started waving like a goof. Luckily she recognized me and she and Lee stopped and chatted with me for a bit. All that I had thought leading up to this meeting was true, Sara is awesome! I had never met Lee before and he was awesome too! Meeting them was one of the highlights of my entire trip. Lee was kind enough to take a photo of me with Sara. I said goodbye and went up to my room to pack up the UPS box but I would see Sara and Lee again, later. A quick trip upstairs where I packed up a box full of swag and relaxed for a moment then it was back into the fray. I took the luggage box back downstairs and got that packed up, and shipped out quickly and easily, and for free, thank you UPS!

I popped back into the exhibit hall and made my way round once again. I caught up with Scott from Antonia’s Nuts and was so happy to see how much the business has grown in the past year. This year they were there with their Nut Truck and a celebrity surfboard. They of course had their chocolate covered nuts on hand which were as delicious as always. I snapped today’s photo of them in front of the truck.

Hanging around the booths and then catching up at the Kodak booth I ran into Sara and Lee again. I knew that Sara had once done a promotion with Kodak and one of their printers for one of her episodes but when we had talked earlier she told me that she’d never met Jennifer Cisney. I had been doing some work with Jennifer for a little while and I hadn’t formally met her until two days prior but I said I’d introduce them to her. So we caught Jennifer and I was able to introduce some great people to each other. Sara, Lee and Jennifer talked for a bit. I hope that this meeting sparks some great things for all involved.

I got a headache and decided to skip the ending keynote. I have no idea why I had such keynote aversion this year, my intention was to hit them all. I went back upstairs, took a nap and nursed a sudden headache. Around 7:30 I got dressed to go over to the Palms for the TechKaraoke Party. I had VIP access to the YouCast table. Don’t get too jealous because it wasn’t that great.

The “VIP” table was the swag giveaway table. How was the swag? Weak, canvas bags with golf tee holders from Men of a Certain Age, Beer koozies from the upcoming Glory Daze and flashlights from the show LEVERAGE. Standard trade show trinkets. They did go and get some branded fortune cookies though and that was pretty cool. I think if they had just done that and been more subtle about the sponsorship then people would have eaten the cookies, read the custom messages and then gotten curious about YouCast. Then have the swag table on the way out to give people the bags as they left.

Domino’s was also a sponsor and they provided a ton of pizzas for the attendees. Domino’s had a decent social media campaign but the pizza itself, still is terrible. If I only eat one slice of a pizza then you know it is terrible because I can stomach pretty much anything. There were a ton of pizzas still out when I left at 11:30pm.

Once the karaoke got underway the place picked up and was really fun. I took my Kodak PlayTouch and recorded many of the singers and the crowd enjoying themselves. Here is the crowd getting into Living on a Prayer.

I hung out for a while and then caught a cab back to the Luxor with Heather in BC and Nadia. I thought I’d catch the tram back to Mandalay Bay but that didn’t happen because I missed the last one by minutes. So I walked back through the Mandalay place, a mall that connects the Mandalay Bay and Luxor. I got myself a strawberry crepe and called it a night. BlogWorld Expo had come to a close.