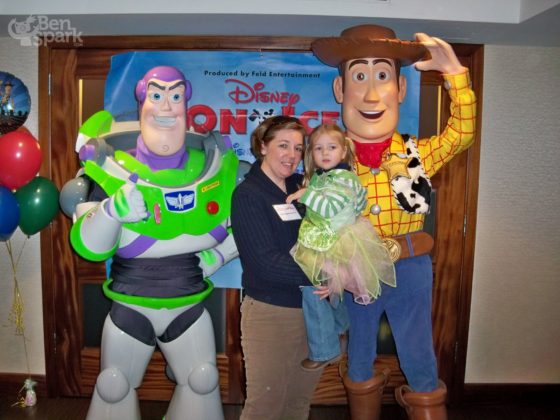 Tonight Allison, Eva and I traveled into Boston for a VIP blogger event at the Boston Garden. We were invited by Disney Parks for a blogger/social media event. My friend Mommy Niri asked me if I’d be interested in something like this months ago, well it came to fruition tonight. We arrived at the Garden at 4:30. We were invited in and then upstairs to the Skyboxes area of the Garden. We went to Banners to have our meal and mingle with other bloggers. Many of my local blogging friends were there and that was great.

The meal was completely kid friendly with Chicken Finger, Hot Dogs and popcorn among the offerings. There were also veggie wraps and clam chowder. Desserts of cookies and some juice boxes for the kids rounded things out. We were also treated to a special visit from Woody and Buzz Lightyear. Eva was a bit intimidated by their size but handled it like a trooper. Allison came up and stood with her for photos. We even got a family one as well. We chatted for a bit and I met Laura Spencer from Disney. She is the Senior Social Media Manager for Disney (a dream job, in my opinion). Laura was very nice and engaging. She even revealed to me a little secret in working at blogger events. Always be smiling because bloggers tend to capture photos of people with their mouths open or mouths full of food. Being a photographer I know that it is hard getting good photos of people in a meal type situation. I tend to hold off my shooting while food is begin served.

After the meal Allison, Eva and I made our way downstairs to our seats. There was a huge response and there were too many people than seats in the Skyboxes so instead we opted for sitting down closer to the action. In my opinion, for a 3 year old being up in the skyboxes probably wouldn’t have been as fun. Down lower Eva was able to really get a up close and personal experience with the event. She could see everything and out seats were great. Eva has seen the first Toy Story movie and none of the others but she loved seeing the characters skating around and was enthralled by the second half with Ken and Barbie stealing the show.

As for Allison and I we had a fantastic time too. The night was great, we enjoyed the quality of the show, the hospitality of Disney Parks and this was the first time that we had been to the Boston Garden since Larry Bird played for the Celtics. Nice venue, tough to get out of but a nice venue none the less.

I also shot a bunch of photos and put them into a Flickr Set.

Disclosure: I was given a family 4 pack of tickets to go and see Disney on Ice: Toy Story 3. We were also provided with a meal and premium seating. The opinions about the event are 100% mine.