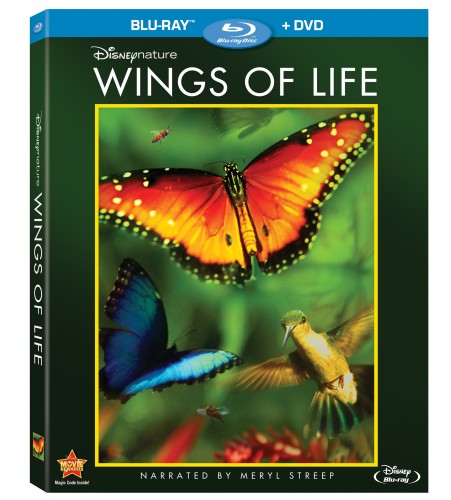 Last year Eva got some Butterflies to raise and release. She loved seeing the butterflies change from caterpillars, to cocoons to Butterflies. It was something that the whole family participated in. Then it was time for us to release the butterflies and it was so hard for her, she still wonders if her butterflies will return. Here is the release video.

We’ve also been excited about butterflies because they are so beautiful to photograph and observe. I’ve taken a ton of butterfly photos in the wild as well as at Butterfly places from Florida to Massachusetts. So, I was excited to receive this copy of Wings of Life from Disney Nature to watch and review. Here is the official trailer for the movie.

I watched this movie and it is visually stunning. The camera work to captures the flight of Bees, Hummingbirds, Bats and Monarch Butterflies was amazing. Cameras captured down to the scales on the butterflies and I was blown away by what I saw. Like I mentioned earlier I am a fan of photographing butterflies and the cinematography in this film was some of the most incredible I have seen.

The overall message of the movie was for us to care for and be aware of pollinators and how we can help. There were lots of good tips on how we can help and for a person who love photographing butterflies I am contemplating planting some milkweed along with a garden, which we have been talking about since we moved in to this house.

I think this is a fantastic movie for kids to help them gain an overall awareness of how to be better stewards of this Earth. There are many things that we can do to help in small and large ways.

You can get your younger kids interested in our winged pollinators with these great kid friendly crafts from Spoonful.com that were inspired by DisneyNature’s WINGS OF LIFE! Check out the link below to learn how to make birds, flowers, butterflies and more! Also, take a look at the official press release below.

LIFE BLOOMS THIS SPRING WITH DISNEYNATURE

BURBANK, Calif. (March 8, 2013) — Spring is in the air—literally—as Disneynature prepares to unveil “Wings of Life,” a spectacular, closer-than-close, high-definition look at the intricate world of butterflies, hummingbirds, bees and bats, and their life-sustaining collaboration with flowers. Directed by Louie Schwartzberg (“America’s Heart & Soul”) and narrated by Academy Award® winner Meryl Streep, “Wings of Life” will be available on Blu-ray™ Combo Pack, Digital and On Demand on April 16, 2013—just in time for Earth Day.

“In the chaos and craziness of our day-to-day lives, few of us stop to consider what’s happening behind the scenes in nature that makes our lives possible,” said Streep. “This film is a stunning adventure that literally takes flight alongside all kinds of winged creatures—butterflies, bees and bats—each working hard to pollinate our planet.”

Said Schwartzberg, “For me, the joy of doing this film is to be able to explore worlds that humans can’t easily experience—bats sipping nectar in the middle of the desert at night, orchid bees expertly manipulated by a bucket orchid, exotic hummingbirds flying like airborne dancers, and a clustering monarch colony with millions of butterflies. I hope to share the spectacle of nature and to spark in others the sense of wonder I have about the natural world.”

Employing multiple cameras, both time-lapse and high-speed cinematography and extraordinary patience (while nature took its time unfolding), filmmakers shot on location in more than a dozen areas, ranging from the El Rosario Preserve in Michoacán, Mexico, to Organ Pipe Cactus National Monument Park in Arizona. “Wings of Life” features extraordinary imagery shot with digital cameras—one capable of frame rates of up to 1500 frames per second, and the use of a pinhole lens, which allowed the cameraman to get within millimeters of an insect subject while retaining a clear view of the background. The resulting imagery—intimate and breathtaking—is brought to life for audiences through spectacular high-definition picture and sound quality.

To celebrate the debut of “Wings of Life,” Disneynature has made a contribution to the Disney Worldwide Conservation Fund (DWCF) to protect pollinators worldwide. The DWCF has already supported more than 20 projects across North America focused on protecting pollinators and their habitats. Grants have helped conservationists save endangered butterflies, expand habitat for honeybees and educate children about the importance of pollinators and how they can help protect them.

The “Wings of Life” Blu-ray Combo Pack includes a sneak peek at Disneynature’s 2014 big-screen adventure “Bears.” In an epic story of breathtaking scale set against a majestic Alaskan backdrop teeming with life, the film, which is currently in production, follows two mother grizzly bears as they impart life lessons to their impressionable young cubs.

ABOUT THE MOVIE:
From Disneynature, the studio that brought you Earth, Oceans, African Cats and Chimpanzee, comes Wings of Life — a stunning adventure full of intrigue, drama and mesmerizing beauty. Narrated by Meryl Streep, this intimate and unprecedented look at butterflies, hummingbirds, bees, bats and flowers is a celebration of life, as a third of the world’s food supply depends on these incredible — and increasingly threatened — creatures.

ABOUT DISNEYNATURE
Disneynature was launched in April 2008. Its mission is to bring the world’s top nature filmmakers together to share a wide variety of wildlife stories on the big screen in order to engage, inspire and educate theatrical audiences everywhere. Walt Disney was a pioneer in wildlife filmmaking, producing 13 True-Life Adventure motion pictures between 1948 and 1960, which earned eight Academy Awards®. The first four Disneynature films, “Earth,” “Oceans,” “African Cats” and “Chimpanzee,” are four of the top five highest overall grossing feature-length nature films to date, with “Chimpanzee” garnering a record-breaking opening weekend for the genre. Disney’s commitment to conservation is a key pillar of the label and Disneynature films empower the audience to help make a difference. Through donations tied to opening-week attendance for all four films, Disneynature, through the Disney Worldwide Conservation Fund, has planted three million trees in Brazil’s Atlantic Forest, established 40,000 acres of marine protected area in The Bahamas, protected 65,000 acres of savanna in Kenya, protected 129,236 acres of wild chimpanzee habitat, educated 60,000 school children about chimpanzee conservation and cared for chimpanzees. For more information about Disneynature, like us on Facebook: facebook.com/Disneynature and follow us on Twitter: twitter.com/Disneynature.

ABOUT THE WALT DISNEY STUDIOS
For more than 85 years, The Walt Disney Studios has been the foundation on which The Walt Disney Company was built. Today, the Studio brings quality movies, music and stage plays to consumers throughout the world. Feature films are released under the following banners: Disney, including Walt Disney Animation Studios and Pixar Animation Studios; Disneynature; Marvel Studios; and Touchstone Pictures, the banner under which live-action films from DreamWorks Studios are distributed. The Disney Music Group encompasses the Walt Disney Records and Hollywood Records labels, as well as Disney Music Publishing. The Disney Theatrical Group produces and licenses live events, including Disney On Broadway, Disney On Ice and Disney Live!

Disclosure: We were given this movie to watch and review. Opinions are 100% my own.