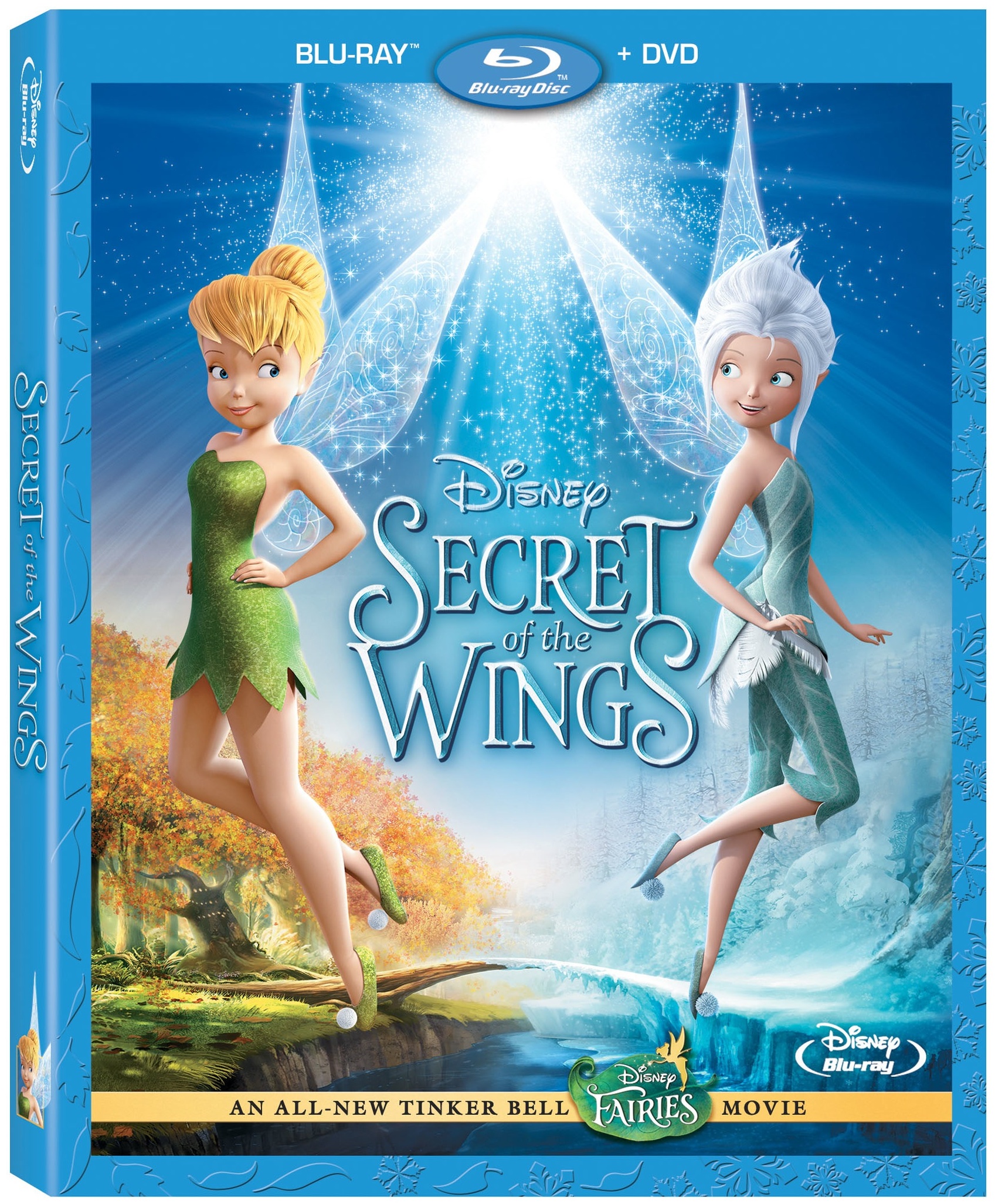 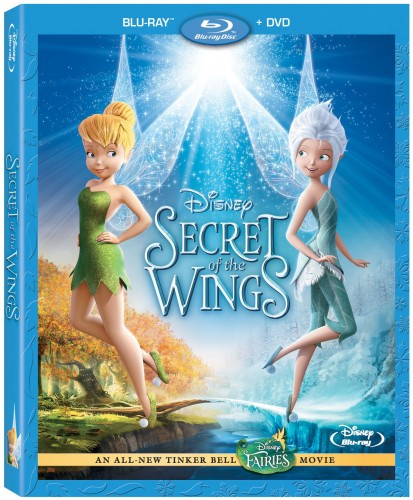 Tinker Bell and her friends return to the movies with the first full length Tinker Bell movie in two years, Secret of the Wings. Eva and I got to go see this in the movie theater in a sneak peek a week before it was released on Blu-ray/DVD. The movie was wonderful. I have to admit that I’m a big time Tinker Bell fan starting with her first feature movie. That one was smart and funny and a great addition to the Disney family of movies. Each movie after that one has gotten better and better with new characters and adventures. This time around it is a whole new cast of supporting characters from the mysterious Winter Woods.

The DVD/Blu-Ray Combo pack that I reviewed came with a 3D Blu-ray copy, Blu-ray, DVD and Digital Download copy. There were some fun bonuses like the half hour special called the Pixie Hollow Games and a very little short called Fright Light starring Cheese and Blaze. There were also two music videos and the movie itself. Eva watched the movie again on the iPad and as a family we watched The Pixie Hollow games and loved it.

We continue to be impressed with the Disney Fairies franchise and even saw a preview for the next Tinker Bell movie coming in 2014. That one also looks to be a fun adventure, Eva was so tickled to see the teaser.

I’ve gotten a ton of cool Winter related stuff to pass on to you about this movie including some videos and downloadable activity sheets. Check them out below.

But first we can’t forget about Halloween and the fairies have a fun activity. 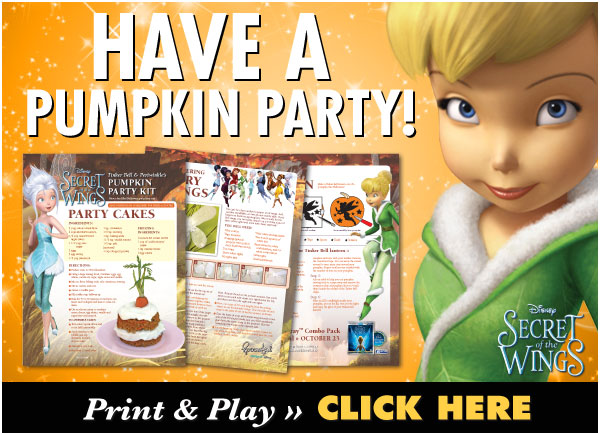 Now we can move on to the Winter stuff.

How to Ice Skate – Fairy Mary has a few tricks up her sleeve. 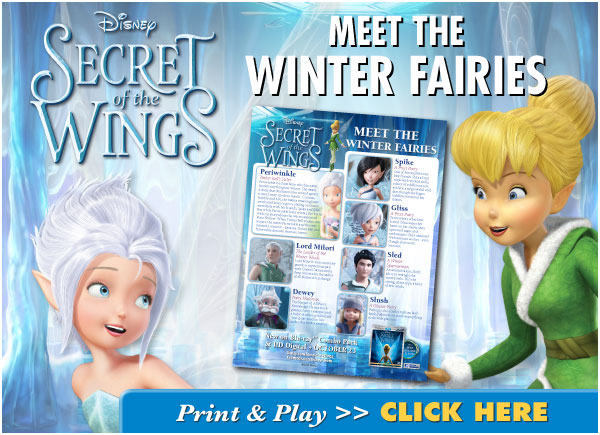 Also got some good ideas for Winter activities.

This is a quieter time for the gardener, as most flowers have died in the frosty cold. Use this period to rid your garden entirely of weeds in preparation for springtime. This can be hard work, and it’s cold outside, so wrap up warmly and ask some of your friends to come and help you get ready for the season ahead.

SEASONAL ANIMAL FACTS: WINTER CRITTERS
Most animals will hide away in the warmth during the cold winter months, but some animals that live in particularly cold climates (far away from us), have no choice but to find other ways of keeping themselves warm.

The arctic fox, native to arctic regions of the Northern Hemisphere, has very thick white fur which keeps them warm and camouflages into their surroundings. They even have small ears to minimalize heat loss!

The world’s largest land carnivores, polar bears, also live in the Arctic. The texture of their plush white fur absorbs the sunlight for warmth, and their paws have rough surfaces to help prevent them from slipping on the ice.

Emperor Penguins live on the opposite side of the world than polar bears—in Antarctica. They are the largest of their species, and they cleverly keep warm by huddling together very close. These penguins take turns rotating through the giant huddle so that each one gets a chance to be in the warm center.

Whatever the time of year, you will always find different kinds of wildlife, so keep your eyes peeled with the changing of the seasons, who knows what you might spot!

SEASONAL FUN FACTS: WONDERFUL WINTER
Not only is this the season to be jolly, but the time to enjoy the crisp winter mornings and, if you’re lucky … snow! Did you know that no two snowflakes are the same?

WINTER ACTIVITY PACK
In Disney’s “Secret of the Wings,” Tinker Bell ventures to the mysterious Winter Woods where she discovers she has a sister, Periwinkle—a sparkling new winter fairy! Together they have plenty of fun, as Periwinkle and the other Winter Fairies show Tink all the excitement to be had in wintertime. If you want to follow in the ‘footprints’ of this adventurous pair and find out how to have your own fun in the snow, look no further. But do remember to wear your mittens!

MAKE A SNOWFAIRY – When the snow on the ground is thick or powdery, lie flat on your back with your arms and legs drawn tightly into your body.Then move your arms in and out as if you are flapping your wings. Do the same with your legs! Stand and admire your work. Does the shape you’ve left behind look a bit like a fairy?

CATCH SNOWFLAKES ON YOUR TONGUE – Have you ever felt snow on your tongue? Wait until the snow is falling heavily, lift your face to the sky and stick out your tongue! The frosty snow will make it tingly!

HOW TO HAVE A SNOWBALL FIGHT! – With a grown-up, scoop up a handful of clean, powdery snow and roll it into a ball no bigger than the size of a tennis ball. Then, once it’s rolled, throw it at your opponent! Remember to only do this with snow that is dusty and powdery, and never aim your snowball at anyone’s head! Make sure you wear mittens or gloves to keep your hands warm!

GO SLEDDING – With a grown-up, find a gentle slope and position your sled heading downhill. Sit down and hold tight. On the count of three push yourself off! You’ll be whizzing and whirring until you reach the bottom. Don’t worry if you haven’t got a sled, you can use a flat sheet of cardboard!

BUILD A SNOWFAIRY – You may have built a snowman before, but have you ever built a snowfairy? Have a go at making your own winter fairy like Periwinkle. Layer the snow to build the body, and finally add another snowy mound for her head. With your parents ok, use silver spray paint to decorate her hair. Wait until the sun shines on your new friend and you’ll see how she magically sparkles and shimmers! Don’t forget to add wings you might make from some fallen tree branches and leaves!

And for the fashionable fairy friend her are some videos on how to make your hair look like some fairies from the movie.

Periwinkle lives in the Winter Woods and has a frosty cool updo, see how to achieve her chic style:

Light fairy Iridessa is cheerful but practical and is a perfectionist when it comes to her hair. See how she tames her tresses into an elegant bun:

Check out how to channel Fawn’s tomboy no-nonsense attitude with her up and out of the way braid:

Want to know more about Secret of the Wings. Here’s the official Press Release

EXCITING WINTER ADVENTURE TAKES TINKER BELL ON AN EPIC JOURNEY AND REVEALS A SECRET… THAT CHANGES HER LIFE FOREVER!

For Tinker Bell and the other warm season fairies, the Winter Woods remains a mysterious and forbidden place. “Secret of the Wings” takes audiences on an amazing journey of discovery with Tink, into this forbidden world where she discovers a magical secret that changes her life forever.

“Secret of the Wings” is Disney’s highly-anticipated all-new movie in the Tinker Bell Disney Fairies film franchise. These beautifully-animated films have ranked at the top of the home entertainment charts every year they have been released.

In addition to the all-new feature film, the spectacular animated release includes a host of exciting bonus features that extend the viewing experience, taking audiences deeper into the magical world of Disney Fairies.

To celebrate the upcoming release of “Secret of the Wings,” Disney has launched a new destination in Facebook for parents to stay updated on Disney Fairies news as well as receive the best new content and activities that they can share with their children. Audiences can become a fan now at: https://www.facebook.com/DisneyFairies.

For the latest information on “Secret of the Wings,” Log-on to www.Disney.com/SecretofTheWings to view film clips, etc…

FILM SYNOPSIS:
Journey with Tinker Bell and her fairy friends into the forbidden world of the mysterious Winter Woods, where curiosity and adventure lead Tink to an amazing discovery and reveal a magical secret that could change her world forever.

ABOUT DISNEY FAIRIES:
Disney Fairies is a franchise built around one of Disney’s most famous and beloved characters, Tinker Bell, her fairy friends (Fawn, Iridessa, Rosetta, Silvermist and Vidia), the power of pixie dust and the enchanted world of Pixie Hollow. Launched in 2005, the Disney Fairies franchise carries on Disney’s rich heritage of children’s storytelling across numerous lines of business including film, publishing, lifestyle merchandising (i.e., apparel, toys, electronics, home décor and stationery), games, internet, mobile-web and theme parks, extending the fairy experiences into many girls’ homes across the globe.

To date, over 1,400 Disney Fairies and Tinker Bell books have been published in 57 countries and 33 languages; over 1.6 million copies of Disney Fairies magazines have sold in 40 countries; and more than 20 territories across North America, Latin America, EMEA and Asia Pacific can now visit DisneyFairies.com to play games, download activities and take flight in the virtual world of Pixie Hollow (where there are 40.5 million Fairies created in Pixie Hollow). Fans can also meet and view the Disney Fairies at any of the Disney theme parks and Disney on Ice shows around the world.

Following the great success of Walt Disney Pictures’ video premiere release of Tinker Bell on Blu-ray™ and DVD in 2008, the company has since released two additional movies, Tinker Bell and the Lost Treasure and Tinker Bell and the Great Fairy Rescue, and “Pixie Hollow Games” a TV special which premiered on Disney Channel in 2011. Secret of the Wings is Walt Disney Pictures’ fourth feature length installment in the movie franchise.

About Walt Disney Studios:
For more than 85 years, The Walt Disney Studios has been the foundation on which The Walt Disney Company was built.Today, the Studio brings quality movies, music and stage plays to consumers throughout the world. Feature films are released under the following banners: Disney, including Walt Disney Animation Studios and Pixar Animation Studios; Disneynature; Marvel Studios; and Touchstone Pictures, the banner under which live-action films from DreamWorks Studios are distributed. The Disney MusicGroup encompasses the Walt Disney Records and Hollywood Records labels, as well as Disney Music Publishing. The Disney Theatrical Group produces and licenses live events, including Disney on Broadway, Disney On Ice and Disney Live!

Disclosure: I received a copy of the Blu-Ray Combo pack to review and also tickets to see the movie on a sneak peek. Opinions about the movie are 100% my own.