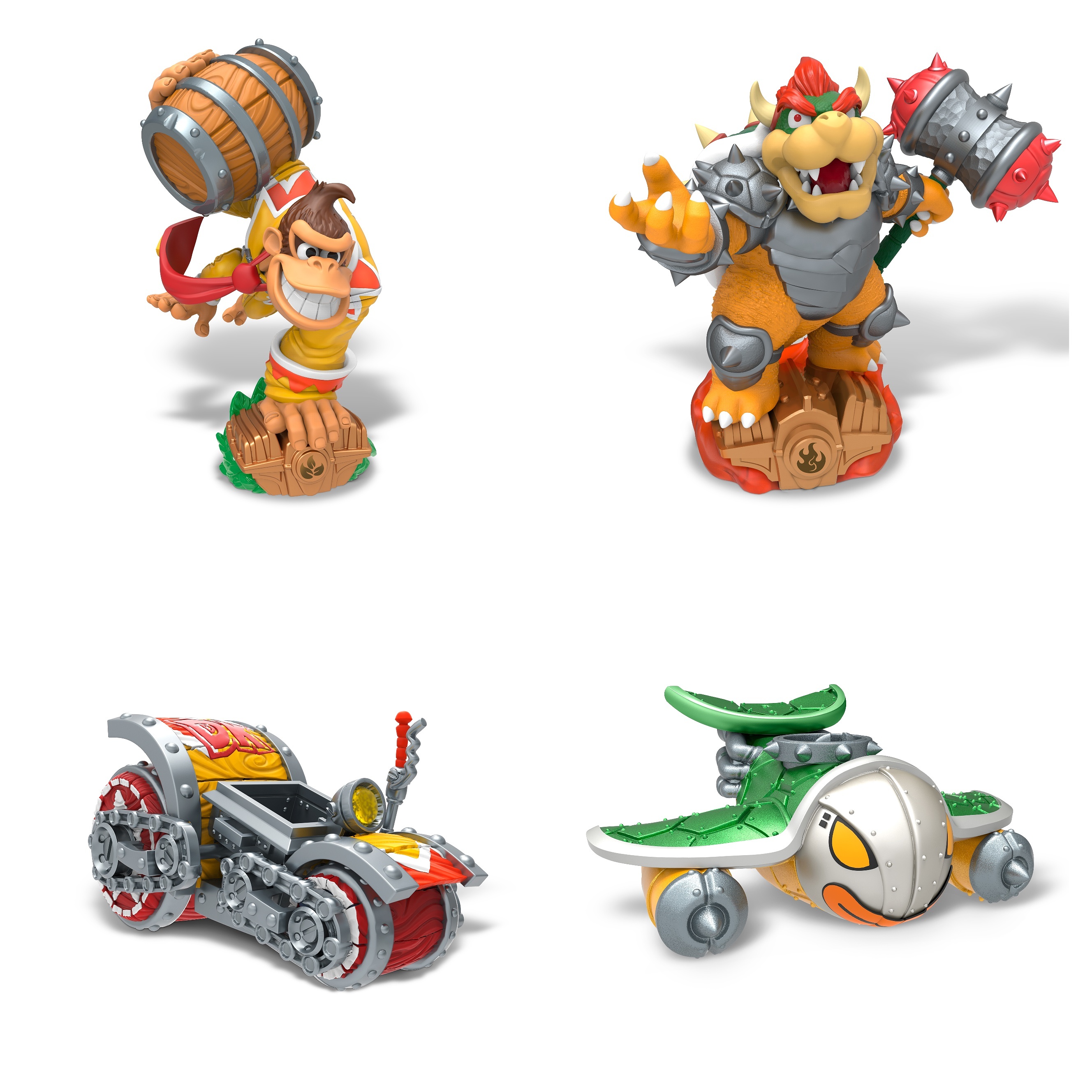 I open up my e-mail while at lunch and get this press release below. I am blown away! I can’t believe that Skylanders will have Nintendo characters Donkey Kong and Bowser as playable figures in Skylanders SuperChargers. But on top of that the figures themselves can also work as amiibo figures. That is an innovative way to incorporate two types of technologies into one game. I’m only speculating here but I wonder if that opens things up to there being some Skylanders characters making their way into some Nintendo games like Super Smash Brothers or Mario Kart. It makes you think.

While the press release will detail the announcement I went through a bunch of photos and posted them over to Instagram along with two very short gameplay videos. It looks amazing! Check out more of my Instagram images below.

Fans Attending E3 2015 will be First to Get Hands-On with the New Skylanders and their Vehicles!

SANTA MONICA, Calif. – June 16, 2015 – Today Activision Publishing, Inc., a wholly owned subsidiary of Activision Blizzard, Inc. (NASDAQ: ATVI), and Nintendo announced during Nintendo’s Digital Event at E3 2015 an unprecedented collaboration designed to deliver to fans an amazing gameplay experience never before seen. Skylanders® is packing some major star power with the introduction of two of Nintendo’s iconic characters — Donkey Kong and Bowser — as guest stars in Skylanders SuperChargers. The characters will be available exclusively in Skylanders SuperChargers Starter Packs for the Wii U, Wii and Nintendo 3DS family of systems, available now for pre-order. E3 2015 attendees will be the first to get their hands on the characters and their specially created vehicles.

Check out the Wii U and Wii starter packs for Turbo Charge Donkey Kong and Hammer Slam Bowser for #Skylanders #SuperChargers. @skylandersthegame

“Activision Blizzard has always cherished our collaboration with Nintendo, and we are grateful for decades of partnership,” said Bobby Kotick, Chief Executive Officer of Activision Blizzard. “Since we made the first toys-to-life game, some of our most dedicated players have been Nintendo fans around the world. Skylanders is delighted to welcome beloved guest stars Donkey Kong and Bowser into its magical world.”

Look who is along for the ride with Turbo Charge Donkey Kong in #Skylanders #SuperChargers. #DiddyKong @skylandersthegame

The goal with this creative collaboration is to honor the personalities and heritage of Donkey Kong and Bowser that fans have come to love from previous games, while creating a fresh look and feel for the guest stars in Skylands. For example, Turbo Charge Donkey Kong’s powers and attacks include barrel throws and exploding bongos and other classic Donkey Kong powers that pay homage to the lore of the character, as well as exciting new moves for the iconic character. Hammer Slam Bowser’s powers range from commanding Koopas, summoning Warp Pipes as well as fierce fire-breathing attacks.

“Activision’s Skylanders games have been very popular on Nintendo platforms, and we hope this collaboration will delight fans of the franchise,” said Satoru Iwata, President of Nintendo Co., Ltd. “We believe this unique approach will help expand the entire category and make it appealing to even more players.”

The trailblazing vehicles-to-life innovation of Skylanders SuperChargers is realized when players take the helm of powerful, tricked-out land, sea and sky vehicles.

Skylanders SuperChargers is a high octane action-adventure videogame where fans have the freedom to speed across Skylands’ roads in vehicular combat, race down roaring rapids and engage in aerial dogfights as they barrel roll through enemy swarms.

In Skylanders SuperChargers, the evil Kaos has unleashed The Darkness to take control of Skylands. Fortunately, a special team of Skylanders known as the SuperChargers has been assembled to pilot an incredible fleet of vehicles with the power to travel through the destruction – over land, sea, and sky! But with Skylands on the verge of collapse, the Skylanders have reached out across all dimensions to call for reinforcements. Answering the call is the most unexpected duo – Donkey Kong and Bowser! Using their own elite vehicles to magically travel between worlds, they have joined the epic battle against Kaos and The Darkness!

Skylanders is bringing another trailblazing innovation with the launch of Skylanders SuperChargers on September 20, 2015 in North America. The new game supports all 300+ Skylanders toys from previous games, enabling all Skylanders characters to pilot land, sea or sky-based vehicles. The vehicles are playable in-game and many feature moving parts, making them also fun to play with in the physical world. Players will also have the ability to customize all vehicles in-game with super cool modifications and upgradeable weapons.

For the ultimate gameplay experience, players can pair a SuperCharger Skylander with its signature vehicle to create a SuperCharged combination, unlocking exclusive mods that rev up the performance of the vehicle and abilities of the character. Players can also have fun seeing Turbo Charge Donkey Kong and Hammer Slam Bowser pilot any of the 20 SuperCharger vehicles available in the new game.

About the Skylanders® Franchise

The award-winning, $3 billion Skylanders franchise has sold through more than 250 million action figures1 since pioneering the toys-to-life category in 2011 with the debut of Skylanders® Spyro’s Adventure. The game originated a play pattern that seamlessly bridged physical and virtual worlds across multiple platforms. In 2012, Skylanders® Giants further evolved the genre and added LightCore® characters to the collection of interaction figures. Skylanders® SWAP Force™, which launched in 2013, introduced an all new play pattern – swapability. In 2014, Skylanders® Trap Team reversed the magic of bringing toys to life by allowing players pull characters out of the digital world into the physical world and became the number 1 kids’ console game globally1. The game was also the first console game to simultaneously bring the entire AAA experience to tablets.

Headquartered in Santa Monica, California, Activision Publishing, Inc. is a leading global producer and publisher of interactive entertainment. Activision maintains operations throughout the world. More information about Activision and its products can be found on the company’s website, www.activision.com or by following @Activision.

About Nintendo
The worldwide pioneer in the creation of interactive entertainment, Nintendo Co., Ltd., of Kyoto, Japan, manufactures and markets hardware and software for its Wii U™ and Wii™ home consoles, and Nintendo 3DS™ and Nintendo DS™ families of portable systems. Since 1983, when it launched the Nintendo Entertainment System™, Nintendo has sold more than 4.3 billion video games and more than 680 million hardware units globally, including the current-generation Wii U, Nintendo 3DS, and Nintendo 3DS XL™, as well as the Game Boy™, Game Boy Advance, Nintendo DS, Nintendo DSi™ and Nintendo DSi XL™, Super NES™, Nintendo 64™, Nintendo GameCube™, and Wii systems. It has also created industry icons that have become well-known household names such as Mario™, Donkey Kong™, Metroid™, Zelda™ and Pokémon™. A wholly owned subsidiary, Nintendo of America Inc., based in Redmond, Wash., serves as headquarters for Nintendo’s operations in the Western Hemisphere. For more information about Nintendo, please visit the company’s website at http://www.nintendo.com.

+ The newly designed Portal of Power will not be available in the Nintendo 3DS versions.

* Gameplay content, functionality, and features will differ for Nintendo 3DS and Wii versions