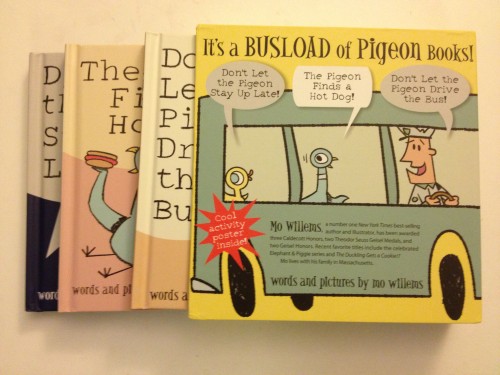 While I was away in California I received a gift of books for my birthday. I wasn’t asked to write a review of them but the opinions in this post are 100% my own and the links go off site. The books were from the Pigeon series by Mo Willems. I received the It’s a Busload of Pigeon Books! boxed set of three classic classic Pigeon titles. I had never read any of these books before, they are 10 years old and 10 years ago we didn’t have any kids to read these stories to so they were not part of our library. I’m glad that now they are part of our library. The thing is, I should not have read them to Eva before bedtime.

Well, the books are so funny that they had Eva in complete stitches while we read them and then in tears when we told her that it was time to stop reading and go to bed. She literally had tears in her eyes and was so upset until I read her Pigeon Finds a Hot Dog! a second time. This is right after we both took photos of her crying because it was so laughable. I think she learned a few lessons on manipulation from the Pigeon after just hearing the books once. Before the meltdown we had read her Don’t Let the Pigeon Drive the Bus!, The Pigeon Finds a Hot Dog! and Don’t Let the Pigeon Stay Up Late!. Each book was very funny.

I was so impressed with how much Mo Willems was able to convey with very simple illustrations. The Pigeon is pretty much a bunch of simple shapes but through great expressions and funny dialog so much humor and emotion is conveyed.

Eva enjoyed the books so much that she read them all to herself the next morning. I think these books will soon become classics in our home after all.

Disney Publishing Worldwide announces the release of a new special edition boxed set, coffee table book, and book in celebration of Pigeon’s birthday this AprilNEW YORK, NY, April 4, 2013–To commemorate the tenth anniversary of Mo Willems’ award-winning Don’t Let the Pigeon Drive the Bus!, Disney Publishing Worldwide will publish three new titles. Fans can take a drive down memory lane with It’s a Busload of Pigeon Books!, a boxed set of three classic Pigeon titles at a smaller trim size and featuring an original poster illustrated by Mo Willems, publishing on April 2. Don’t Pigeonhole Me!: Two Decades of the Mo Willems Sketchbook, available on June 18, gives adults a rare glimpse at Willems’ early self-published Pigeon illustrations, along with two decades’ worth of cartoons and sketches. Elephant and Piggie, Willems’ New York Times best-selling duo, will also have a new book, titled A Big Guy Took My Ball!, publishing on May 21.

“It’s hard to fathom what the Pigeon has put me through over the last decade, and the new Pigeon collection will be a fun revisit of some of Pigeon’s early attempts at emotional blackmail,” said Willems, a three-time Caldecott Honor recipient. “I am particularly looking forward to publishing the past 20 years of my personal drawings and sketchings, including the birth of the Pigeon, in one comprehensive collection.”

“Mo’s ability to break the fourth wall through storytelling and captivate young readers through a character they can relate to is the reason the Pigeon books resonate with children and families,” said Suzanne Murphy, vice president and publisher, Disney Publishing Worldwide. “We are looking forward to seeing where our avian birthday boy takes readers in the decades to come.”

It’s a Busload of Pigeon Books! — Climb on board for super fun reading with three picture books starring the famous bird! The boxed set includes three favorites: Don’t Let the Pigeon Drive the Bus!, The Pigeon Finds a Hot Dog! and Don’t Let the Pigeon Stay Up Late!, along with an original poster illustrated by Mo Willems with activities on the reverse side.

Don’t Pigeonhole Me!: Two Decades of the Mo Willems Sketchbook — Young readers first met the Pigeon in 2003. But Pigeon was born many years earlier in the pages of a Willems’ sketchbook. This new adult coffee table book is a 20-year compilation of characters, scribbles, and ideas. These sketches have always been the well from which Willems draws ideas and inspiration. Featuring a foreword by Eric Carle and an introduction by Willems, this volume includes all twenty sketchbooks from the last two decades.

A Big Guy Took My Ball! (An Elephant & Piggie Book) — Elephant and Piggie, Willems’ Geisel Award-winning duo, will also have a new tale of their own. Gerald and Piggie, a curious pair, are best friends. Piggie is devastated when a big guy takes her ball. Gerald is big, too . . . but is he big enough to help his best friend?
For more information, visit http://www.pigeonpresents.com/ or follow on Twitter @The_Pigeon.

About Mo Willems:
In April 2003, television writer and animator Mo Willems published his first children’s book, Don’t Let the Pigeon Drive the Bus!. What originated quietly as a doodle in a sketchbook for family and friends became a publishing phenomenon and an instant children’s classic. The Pigeon Finds a Hot Dog! followed in April 2004; Don’t Let the Pigeon Stay Up Late! in 2006; The Pigeon Wants a Puppy! in 2008; his first app for iOS Don’t Let Pigeon Run this App! in 2011; and The Duckling Gets a Cookie!? and Don’t Let Pigeon Finish This Activity Book! in 2012. Don’t Let the Pigeon Drive the Bus! was awarded the prestigious Caldecott Honor by the American Library Association and was inducted into the Indies Choice Picture Book Hall of Fame. More than 5 million Pigeon books are in print in the US, with 14 foreign language editions around the world.

Mo Willems has been awarded the Caldecott Honor on two other occasions: for Knuffle Bunny: A Cautionary Tale and Knuffle Bunny Too: A Case of Mistaken Identity. In addition to picture books, he wrote the script and lyrics for Knuffle Bunny: A Cautionary Musical, commissioned by the Kennedy Center for its 2010 season, and Elephant & Piggie’s WE ARE IN A PLAY!, for their 2013 season. Knuffle Bunny: A Cautionary Musical is currently touring the United States and Elephant & Piggie’s WE ARE IN A PLAY! will run from November 23–December 31, 2013. Mo also created the Elephant & Piggie series of easy readers, which were awarded Theodor Seuss Geisel Medals for There Is a Bird on Your Head! and Are You Ready to Play Outside?, as well as three Honors for We Are in a Book!, I Broke My Trunk!, and Let’s Go for a Drive!. Other favorites include City Dog Country Frog, illustrated by Jon J. Muth, and Naked Mole Rat Gets Dressed. He began his career on Sesame Street, where he garnered six Emmy Awards. Mo lives with his family in Massachusetts. For more information visit http://www.mowillems.com.