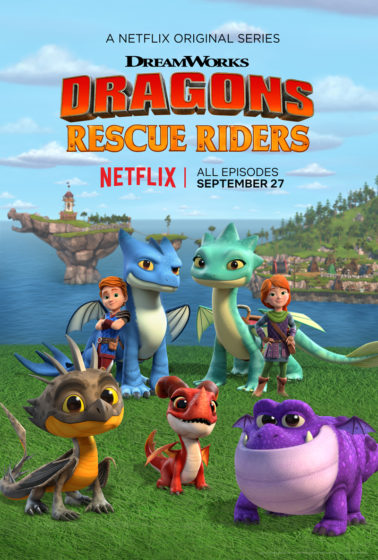 I was provided a screener code to watch DreamWorks Dragons Rescue Riders on Netflix before the release date of September 27th. Opinions are my own.

We have been fans of How to Train Your Dragon ever since the first movie. When Eva was smaller I began reading her the Cressida Cowell series and we really enjoyed it. Now there is a whole new series for younger viewers called DreamWorks Dragons Rescue Riders. This series is set in the same world as How To Train Your Dragon but focuses twins Dak and Leyla. They are orphans who were raised b a dragon and because of that they can speak to dragons. This is the first time that we have speaking dragons in a dragons show. Hearing the dragons speak appealed to Andrew. When we watched the first episode he told me that this was something that he would like to keep watching. 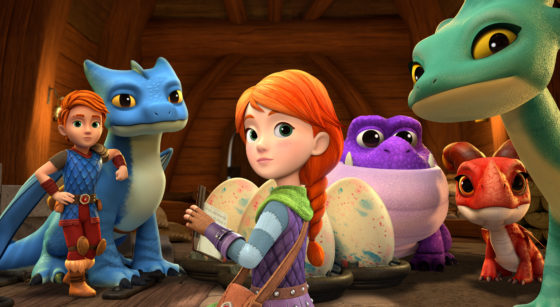 On the team there are four dragons to start. Dak rides Winger and Leyla rides Summer. The other two dragons are Cutter and Burple. These two are around for plenty of comic relief. In later episodes we meet the dragon Aggro. During the episodes the dragons learn to work together to rescue other dragons and humans alike. The team is adopted by the town of Huttsgalor by the chief Duggard. Duggard is like a cross between Gobber and Stoick. He’s silly and bumbling but has all his limbs. Duggard was rescued by the Rescue Riders in the first episode and gives the team their home in a lighthouse on the outskits of Huttsgalor. 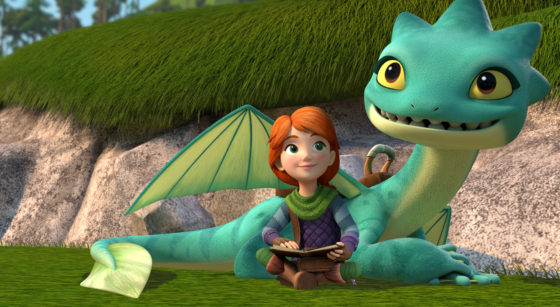 The show is simple and light. It is also very colorful with lots of dragons and their own personalities. The kids are huge fans of the show Jesse and Bunk’d so they were excited to see Skai Jackson as Summer. I’m not sure if hardcore Dragons fans are going to be as into this show because of the talking dragons but it definitely appeals to the younger kids and if that is a way for them to get excited about the rest of the world of How to Train Your Dragon then that is great news.

The show is aimed at the pre-school set and like many shows of this type they are episodic and loosely connected with a moral at the end of each of the episodes. I’ve watched many kids shows and once I got past the whole “dragons talking” thing I could settle in and enjoy this as something new that is part of a world that I have loved for a long time. I actually liked the “Snidely Whiplash” type character, Magnus who is a bit of a trickster, inventor and bumbling villain. Of all the dragons my favorite is Cutter. Even the two main kids are enjoyable. This will be a fun show for your pre-school set and is part of the new crop of DreamWorks Jr. shows that are geared toward the younger viewer. 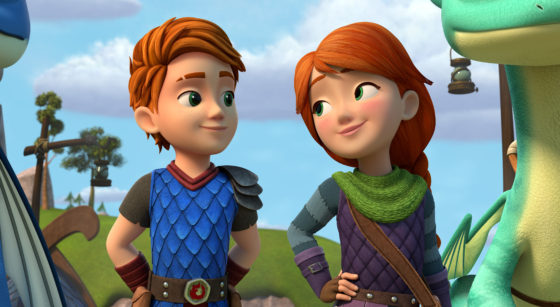 More information about the show is below.

Premiering September 27, the CG animated comedy adventure marks an all-new chapter in the Oscar®-nominated How To Train Your Dragon franchise.

DreamWorks Animation unveiled the high-flying trailer and cast of its exciting new preschool series Dragons Rescue Riders. This all-new chapter for young fans set in the world of DreamWorks Dragons follows the adventures of twins, Dak and Leyla, who because they were raised by dragons, share a unique ability to communicate with them. The brother and sister lead a team of five adorable young dragons, Winger, Summer, Cutter and Burple with whom they spend their days rescuing other dragons, and helping the people in their adopted town of Huttsgalor.

The brand new trailer provides a first look of Dak, Leyla and their dragon friends in action, where friendship, courage and teamwork are at the heart of every thrilling rescue mission.

DreamWorks Dragons Rescue Riders features the voice talents of Nicolas Cantu (The Amazing World of Gumball, Sofia The First) as “Dak,” who is in charge of training the Rescue Riders and Brennley Brown (The Voice, Sofia The First) as “Leyla,” Dak’s twin who is a whiz on all things dragons. Voicing the young dragons are Marsai Martin (Little, Black-ish) as “Aggro,” Zach Callison (Steven Universe, The Goldbergs) as “Winger,” Skai Jackson (Jessie, Bunk’d) as “Summer, ” Noah Bentley (Adam Ruins Everything) as “Burple,” Andre Robinson (Dragons: Race to the Edge, Niko and the Sword of Light) as “Cutter.”