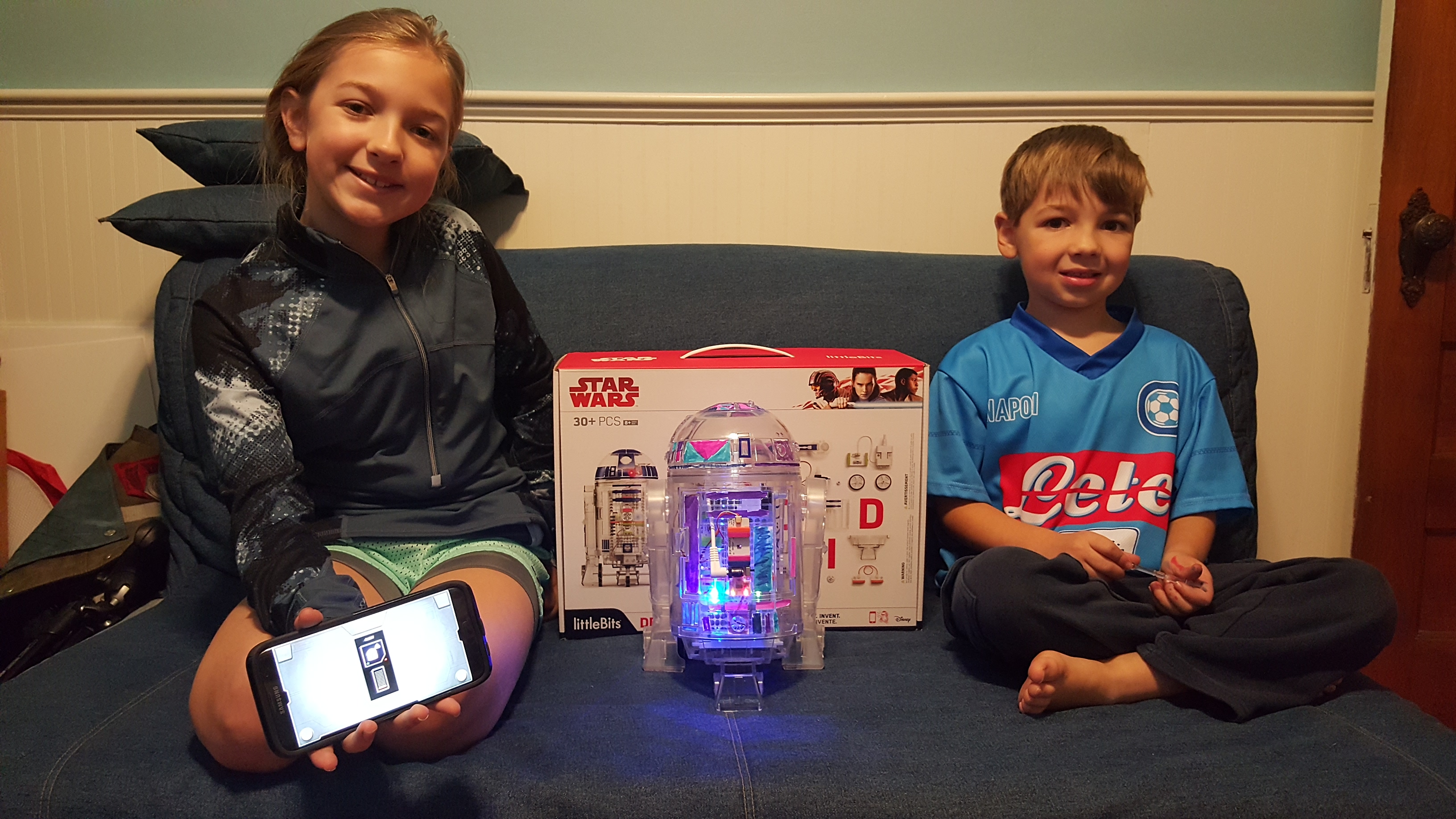 On October 9 – 11 I attended a Disney Press Event for THOR: RAGNAROK. My hotel and airfare and meals were taken care of while I was in L.A. Opinions and observations as well as recaps and such are all my own. This post will also contain some affiliate links to Amazon.com.

One of the things that we did during this trip was a luncheon with littleBits. While at this lunch we were able to try out the Droid Inventor Kit. While I played with it as R2-D2 I then decided that I wanted to see what else I could create using the littleBits that were available to me. With the kit you can create R2-D2 and make him do a whole bunch of things. You can drive him, make him color using a marker, use the force to move him and even use R2-D2 as a proximity sensor. Your creativity does not have to stop at simply using the kit. You can design your own droid using other materials like a milk carton. I had a bunch of fun ideas on how to make our own droids. That is a good idea because there is a major contest happening which I will tell you about later in the post. After having spent some time with the littleBits Droid Inventor Kit I can say that it is a great toy for the holidays. This is a toy that kids will be able to experiment with and use their imaginations to create fun Droids. This is a great STEAM (Science, Technology, Engineering, Art, and Math) Toy. The bits are so easy to snap together because they connect with magnets and only connect in specific ways that work. This cuts down on frustration with the kids. Kids can learn and explore with the kit and the app. They will have hours of fun learning and exploring. When the kids and I played with the kit they loved being able to try out tons of sounds. There are 20 different R2-D2 specific sounds but you can also record your own sounds. So, you could use your Droid to send secret messages back and forth. That happens later. With the app you assemble your Droid and then there are missions that you do to learn more about how your Droid works and what capabilities it has. With the different missions you will reconfigure your Droid to a a number of different things. The way that you arrange your bits along with the app allows it to do different things like drive around, or spin R2-D2’s head. With a second kit and more littleBits you can do even more cool things. The kids were most excited to find out that in addition to the stickers that were included to make the Droid look most like R2-D2 it also included a sheet of blank stickers that they could use to make whatever Droid they wanted. The decided on a color scheme for their Droid and then gave it a number designation of 02-76-0 and called the Droid Zaru. While we have only done the step by step missions and used the Droid in a more out of the box mode there are so many more things that we can do. We may have to stock up on more Bits during the Black Friday sale on littleBits in order to get more Bits to build the ultimate Droid for the littleBits Competition.

The littleBits Competition: Droid Inventor Kit which invites kids, families, and Star Wars fans—residing in the US, UK, and Canada – to share their own unique Droid creations with the global inventor community. The competition will run from November 15, 2017 to January 10, 2018. Fans and families will be able to submit their own leading-edge Droid design creations, judged by Star Wars: The Last Jedi stars Daisy Ridley (the actress who portrays Rey in the current Star Wars trilogy) and Kelly Marie Tran (the actress who portrays Rose Tico in Star Wars: The Last Jedi) alongside Ayah Bdeir (founder and CEO of littleBits) and Kathleen Kennedy (president of Lucasfilm). Check out more info about the competition–and the killer prizes–here: https://shop.littlebits.cc/pages/starwars and in the video above. Consumers interested in purchasing the award-winning Droid Inventor Kit will have the opportunity to take advantage of a 20% off discount on littleBits.cc, Walmart.com, Amazon.com, ShopDisney.com, as well as Walmart and Disney stores nationwide from Thursday, November 23, 2017 through Monday, November 27, 2017.

Facebook, Fitbit, Industrial Light & Magic, Instagram, Twitter, Google and Lucasfilm Join Forces With littleBits to Inspire the Next Generation of Inventors at Droidathon. Held at the Lucasfilm San Francisco campus, iconic Bay Area technology companies came together for the first-ever “Droidathon,” an event for kids from local organizations including the Black Girls CODE, Booker T. Washington School Community Center, The Boys & Girls Club, and the YMCA where inventors showcased their Droid creations and discussed their ideation and inspiration. The Droidathon kicked off the littleBits Competition which invites kids, families, and Star Wars fans-residing in the US, UK, and Canada – to share their own unique Droid creations with the inventor community. LittleBits also has special brick adapters that let you connect your LEGO bricks and other bricks similar. When we put together our entry to the littleBits Competition. We have so many other ideas that we are going to explore in order to create an Ultimate Droid. We first need to think about what sort of problem our Droid will solve.