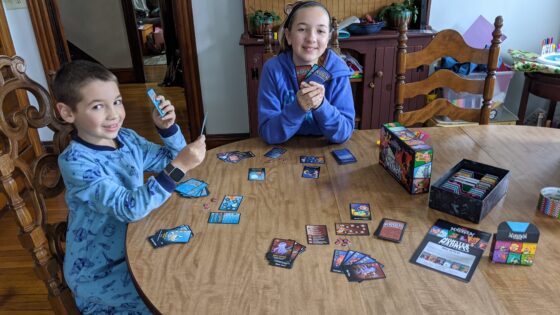 We received a copy of Dungeon Mayhem: Monster Mayhem for free to play and review. Opinions are our own.

The kids had no school today and so it was time to play some games with dad. Luckily we just received a fun new game from Wizards of the Coast called Dungeon Mayhem: Monster Mayhem. This is actually the third iteration of the Dungeon Mayhem series. The cool thing about this game, though is that the box actually holds all the previously released cards and organizes them all in one place. this is a good thing because after playing today I went and ordered the previous games Dungeon Mayhem and Dungeon Mayhem: Battle for Baldur’s Gate. Now all 12 of the characters can be in the same box and this also means that the game expands to be able to play with 6 players. Rules for 6 player games are included in the box. Take a look at how it is organized. I’ll put them in better order with heroes in one part and monsters in another. 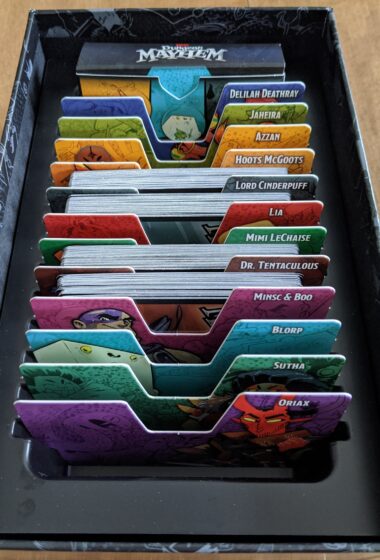 The game is fast paced and fun. Each character has 10 hit points that can go up or down depending upon which cards are played. Each character also has special abilities from the devastating to the ridiculous. For example Delilah Deathray a vain Beholder has a card that asks other players to praise her or suffer the consequences. We all giggled when that card was played.

In Monster Mayhem there are six classic Dungeons and Dragons monsters. They are made to be cartoonish and fun for younger players and perfect for family play. The character decks in Dungeon Mayhem: Monster Madness are illustrated by Cam Kendell. Here are the six monsters in the box.

I knew that Eva would like it because she has been talking about wanting to get into Dungeons and Dragons. While we have not yet taken the plunge into that game we have skirted around it through several other games. Eva will most likely be our Dungeon Master and guide us on some fantastic adventures when we do start playing. Also, when we recently say the movie Onward it mentioned a few Dungeons and Dragons monsters and they are in this game, they were a Beholder and a Gelatinous Cube.

The game was easy to set up and get started. Each player picks a deck that corresponds to a particular character, monster in this case. Then play goes in a circle with players drawing cards and playing them dealing damage to each other, put up defenses and recovering hit points. Each payer gets a card that tells them what each symbol means so it is very easy for players of differing ages. The game is for ages 1 and up but Andrew had no problem playing.

The game goes for $24.99 and I was able to pick up the first two games for $20 total on Amazon.com. As far as replay-ability and fun this game is worth the price. If you are interested in checking out the game please consider using our Amazon.com affiliate inks below to make your purchases. IT costs you nothing extra and it helps us out.