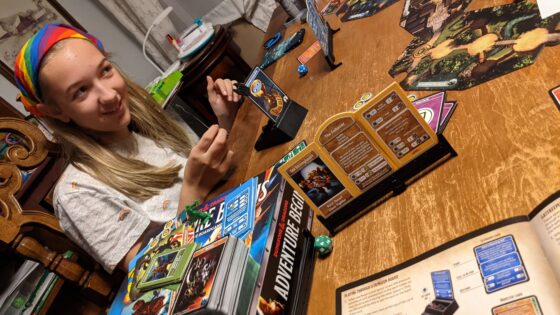 We received a copy of Dungeons & Dragons Adventure Begins for free from Hasbro to play with and review. Opinions are our own.

In our family we enjoy playing all sorts of board games. We love storytelling and being creative. We’re fans of She-Ra, The Dragon Prince and other epic multi-arc kids shows and also kids books like Harry Potter, Percy Jackson and more. We’ve attended the Granite State Comicon where the kids cosplayed their own original characters. Eva plays MAGIC the gathering with me and Andy plays Pokemon. The kids love games. They love adventure and excitement. The enjoyed the heck out of Dungeon Mayhem: Monster Madness which is also from Wizards of the Coast. Eva even played Dungeons & Dragons with friends this Summer. Andy, is just not quite there yet so when I heard about the Board Game Dungeons & Dragons Adventure Begins I had to see about reviewing it with the kids.

This game is the next logical step before we begin playing full on Dungeons and Dragons for real. The game is for 2-4 players ages 10 and up but Andy can do it no problem. You’ll need a decent sized space for play like a kitchen or dining room table. You’ll also need about 2 hours to complete a full quest. It may be shorter depending upon how descriptive everyone is while playing.

Players choose a boss monster to challenge and then their journey will begin. Players also choose a character and there are pre-made attributes. They first choose what the hero looks like. They next choose a personality for the hero which also includes a special ability to use during combat. Lastly they choose their combat tile which has their weapons and combat abilities. Each combat tile has two levels, Level 1 and Level 2. Players can level up later in the game when they earn enough gold to do so. Players also choose backpacks that have special items that the players can use during the game. There are many moments where players have to describe how they will perform certain actions. Each player also gets a D20 (20-Sided Die) to use when making attacks and or choices.

When players select the boss monster they choose the corresponding game board and put that at the far end of the journey. then then assemble the rest of the game board tiles randomly to make the full game board. They also locate the gamekeeper cards and place them at the end of the three location tiles prior to the final destination tile. The boss monster goes at the end of that tile. Players then take turns journeying through each location and battling monsters, earning gold, making choices and leveling up or dying. This is a cooperative game so players work together to help each other defeat the monsters and the boss monster at the end.

Each player gets a chance to be the DM or Dungeon Master. This is Eva’s favorite part of the game. She chooses a card and then describes the monster that we have to battle and how it attacks us in turn. As players we also describe the way in which we will attack the monster or why we make certain decisions that we do when presented with choices. We then roll a die and see if we are successful or not. The kids loved coming up with crazy scenarios. However, toward the end of the game it was time for bed and me being super creative kept trying to use my brute strength ability by “kicking the monster in the shins”.

I would definitely allot way more time for the next campaign so that we can fully complete it as a team. I think it will become one of our favorite family board games.

You can pick up this game from Amazon.com using our Amazon affiliate link if you are so inclined.