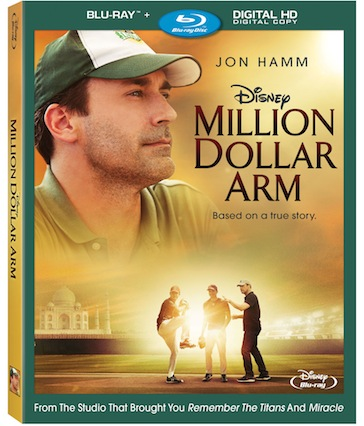 I have not seen Million Dollar Arm. I really want to see the movie because the story is interesting to me. I am not a sports fan but I like Sports movies, especially about underdogs. This movie certainly fits that genre. It is about a Sports Agent who is trying to find the next big baseball player. He tries something completely different and recruits some cricket players from India. Along the way he learns that there is more to life than the lifestyle he has been accustomed to.

Many of my friends were part of a trip out to California to see the movie and meet the stars, it was the #MillionDollarArmEvent which was similar to the event that I am attending next week in California, the #100FootJourneyEvent, #ABCFamilyEvent and the #GuardiansOfTheGalaxyEvent. I’m kinda hoping that we get a DVD of this movie to review but since it is coming out in October it might be a little too soon, but man do I want to watch and review this movie. Learn more about the release of the movie below.

BURBANK, Calif. July 11, 2014— From the studio that brought you “Miracle” and “Remember the Titans,” comes the inspirational true story “Million Dollar Arm,” sliding home on Disney Blu-ray™, Digital HD, Disney Movies Anywhere, DVD and On-Demand Oct. 7, 2014. Set against the backdrop of America’s favorite pastime, this must-own baseball drama stars Jon Hamm (“Mad Men,” “The Town,” “Bridesmaids”) as a sports agent who sets out in search of the next great major league baseball pitcher and ends up discovering the true value of teamwork, commitment and what it means to be a family.

Cheered by audiences and critics alike, this “genuine crowd pleaser” (Pete Hammond, Movieline) delivers major league fun on Blu-ray and Digital HD with grand-slam high definition picture and sound that bring the excitement of the stadium experience right into viewers’ homes. The in-home release of “Million Dollar Arm” also steps up to bat with bases loaded with exciting bonus features, including an alternate ending, deleted scenes, outtakes, the making-of featurettes “Training Camp,” “Their Story,” “Million Dollar Music by A. R. Rahman,” and more!

Audiences everywhere can catch this unforgettable sports story in the following formats with bonus features as listed: