I received a copy of Disney’s Planes to watch and review. These are my opinions based on watching the movie. They are 100% my own as always.

Disney’s Planes arrives in stores today. I did not see Disney’s Planes when it was in theaters. It wasn’t on my radar, so to speak. I knew about the movie but didn’t have much interest in it. So, when I got the opportunity to go and review it I asked Eva if she was interested in watching it, she was. So I requested a copy and we watched the movie as a family on a lazy Sunday afternoon when we were all sick. It wasn’t too bad. I found it more entertaining than Cars 2. I liked the first Cars movie and thought that was very well done. The second movie I did not like very much at all. Planes was somewhere in the middle.

How to Draw Dusty

The formula for Planes was fairly similar to that of Cars. You have the main character of Dusty who dreams of being something more than what he was built to be. Dusty, Planes version of Lightning McQueen, is a crop duster plane but he wants to be a World Class racer. Dusty’s good friend, Chug, is a fuel truck and fulfills the role of Mater but is played by the more like-able and talented Brad Garret. We even have a grizzled old war hero, Skipper who reluctantly agrees to help Dusty out by training him.

Where Planes diverges is in the character of Dusty. He’s not arrogant like McQueen was. Dusty wants to see more, to be more and tries very hard to accomplish that. Even though Dusty is more of a character that you could relate to I didn’t find myself pulling for him like I did for Lightning. Maybe it was because we’ve seen the story before in a different way or maybe it was because Dane Cook’s delivery was so close to Owen Wilson’s, I’m not sure what it was but the movie did not draw me in.

The movie, however delighted my kids. Eva even requested to watch it again within the same week. She liked the jokes and the race. I enjoyed the performances by Carlos Alazraqui, Sinbad and Brad Garrett. I thought that they did great jobs. Dane Cook’s performance was a bit flat and I couldn’t tell the difference between the character of Doc from Cars from that of Skipper from Planes. The mysterious old guy with a secret past has been seriously overdone.

I did enjoy the behind the scenes clips because they showed how the team that worked on the movie came to the decisions that they made for the movie. I especially enjoyed the training montage scenes. 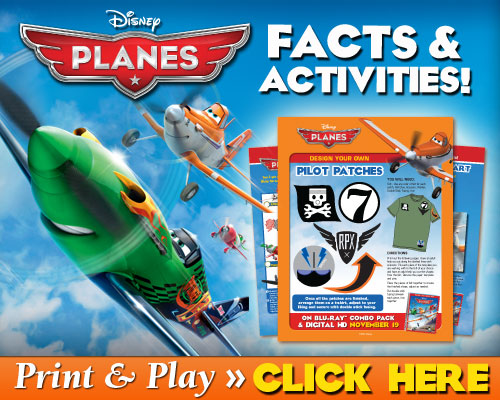 Burbank, Calif., November 5, 2013 – This November, Disney salutes National Aviation History Month, a month-long celebration of U.S. aviation’s storied past, with the release of the high-flying family adventure “PLANES” on Blu-ray™, DVD, Digital HD and On-Demand on November 19, and through educational partnership with aviation museums across the country.

Beginning November 1, 2013, select aviation museums will feature “PLANES”-inspired learning materials designed to introduce children to the exhilarating world of flight and its most celebrated figures. These materials include the Disney “PLANES” Reel, featuring “Top Ten Flyers,” a countdown of some of the greatest aviators in history hosted by ESPN’s Colin Cowherd, “Aviation Fun Facts” tip sheets, and activity sheets families can fill out while visiting their favorite aviation museums. For more information on participating museums, please visit the Planes Facebook page at http://di.sn/sI1.

To further celebrate National Aviation History Month, Disney will release the spirited animated comedy “PLANES” on November 19 for families to enjoy at-home. Throughout our nation’s history, the world of flight has given us such influential role models as the Wright Brothers, Charles Lindbergh and Amelia Earhart, all famous aviators who proved that, no matter how high their dreams, with imagination, hard work and perseverance, anything is possible. Now, the world of Disney animation gives families everywhere a new kind of high-flying role model in Dusty, the crop dusting plane with sky-high dreams at the center of Disney’s “PLANES.” His indomitable spirit reflects that of history’s great aviators and is sure to inspire children’s imaginations to take flight this November.

Follow Director Klay Hall’s personal journey during the making of “Planes” and discover why his family connection to aviation made “Planes” his perfect project. Fly along with Klay as he lands on a working aircraft carrier to get first-hand experience on the flight deck.

Social Media
Stay connected with the latest news and information about “PLANES”:

Film Synopsis:
The world of Cars takes flight in Planes, Disney’s high-flying animated comedy revved up with action and adventure. Join Dusty, a crop duster with sky-high dreams and a once-in-a-lifetime chance to take on the world’s fastest flyers in the greatest air race ever. Dusty has a huge heart but two big problems…he’s not exactly built for speed, plus he’s afraid of heights. His courage is put to the ultimate test as this unlikely hero aims higher than he ever imagined. With a little help from his friends, Dusty finds the courage to be more than he was built for—and the inspiration to soar.

About The Walt Disney Studios:
For nearly 90 years, The Walt Disney Studios has been the foundation on which The Walt Disney Company was built. Today, the Studio brings quality movies, music and stage plays to consumers throughout the world. Feature films are released under the following banners: Disney, including Walt Disney Animation Studios and Pixar Animation Studios; Disneynature; Marvel Studios; Disney|Lucasfilm; and Touchstone Pictures, the banner under which live-action films from DreamWorks Studios are distributed. The Disney Music Group encompasses the Walt Disney Records and Hollywood Records labels, as well as Disney Music Publishing. The Disney Theatrical Group produces and licenses live events, including Disney on Broadway, Disney On Ice and Disney Live!