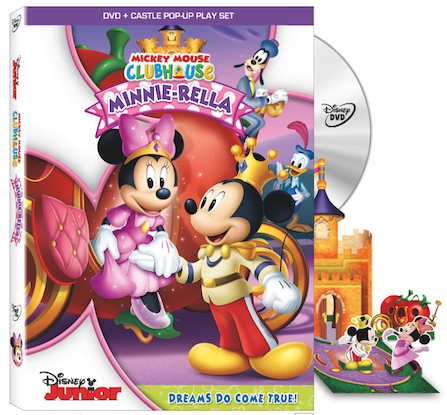 We were sent a copy of the newest Disney Junior DVD, Minnie-rella, a collection of some Mickey Mouse Clubhouse episodes. Opinions of the DVD and show are 100% our own.

Mickey Mouse Clubhouse has seen a great resurgence in our house. My son has discovered the show and he absolutely loves his “Me Mow!” The show has become a daily staple and we were getting a bit tired of the ones that are On Demand so when I got the opportunity to review this new DVD I was very, very grateful. Andrew is usually very engaged in the show that we can let him be for a few minutes but not very long at all, he’s learned how to open the baby locks and has taken to making big messes when left to his own devices for longer than a few seconds. So, I end up watching many of these shows with him. works out well, since I review so many of them.

The Minie-rella story is a play on the story of Cinderella with Minnie in the titular put-upon role. Mickey, of course, is The Prince and Clarabell Cow is Minnie’s Fairy Godmother. The episode also features Quoodles a female Toodles character that brings Minnie Mousekatools that she needs in her adventure. There are quite a lot of these things flying around now and they have faces. Don’t get me started on that. I am anti-face on the Toodles.

The episode featured a few songs and the kids enjoyed it. He son knows all the characters and has a good time responding to the questions that the characters pose to the viewer. He’s not giving the “right” answers or anything but he is engaging with the show and it has helped him with his vocabulary and pronunciation of new words.

The DVD Comes out on February 11, 2014 just in time for Valentine’s Day. Might be a nice DVD for the kids.

Synopsis: Our pals need to get Minnie a surprise present, so they keep her busy with plenty of chores to do at the Clubhouse. Tired from so much work, Minnie falls asleep and dreams that she is MINNIE-RELLA! Inspired by the fairy tale of Cinderella, the story of Minnie-rella sparkles with music and fun as we recognize our favorite Clubhouse characters in familiar roles.

Poor Minnie-rella needs a lot of help to get ready for Prince Mickey’s Grand Ball! With a wave of her wand and some “Mouseke-doodle-lee-doo” magic, Minnie-rella’s Fairy Godmother, Clarabelle, transforms an ordinary tomato into a magnificent carriage and Minnie-rella’s raggedy dress into a beautiful gown that is perfect for a princess. But Minnie-rella’s enchanted dance with Prince Mickey at the ball must end when the spell is broken at midnight. With our help, Prince Mickey finds the princess who fits into her lost glass slipper – Princess Minnie-rella!

Mickey and the Enchanted Egg – Mickey finds an egg which soon hatches into a Baby Dragon. Mickey and his friends have to return the Dragon back to her castle home and convince the powerful Wizard Pete that they didn’t steal the egg in the first place.

Daisy’s Pony Tale – When Professor Von Drake’s new invention, a Fritzer-Spritzer Spray Potion, accidentally gets spritzed on Daisy’s ponytail, it makes her hair grow super long! That’s not goody-good at all. Along with Mickey and Sire Goofs-a-Lot, Daisy travels on her pony to find twelve leaves of the magical plant, Rapunzel, in order to reverse the effects of the Professor’s potion and fix her ponytail.