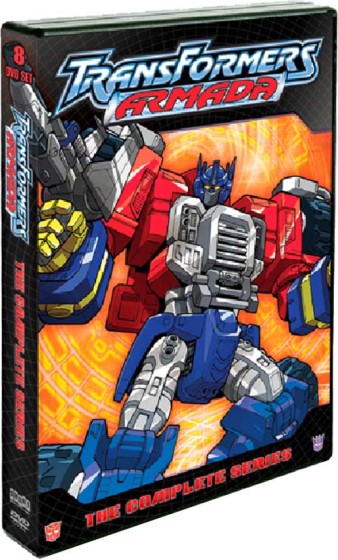 We received a copy of Transformers Armada the Complete Series to watch and review. Here are our thoughts.

I’ve watched all of the Transformers series that have come out in the US. Prior to watching Transformers Armada I watched Transformers Robots in Disguise. Transformers Armada was a whole new kind of show where the story introduced mini-cons to the lineup as a new faction of Cybertronians. The mini-cons could work with the larger bots and power them up or serve as weapons. I remember buying a lot of those toys. Each group of mini-cons would do different things. The most important ones were the ones that turned into the Star Sabre. The mini-cons just wanted to be left alone and not used as pawns in the Autobot vs Decepticon war. They fled Cybertron and crashed on Earth where they lay dormant until some kids found and reawakened them. Unfortunately this reawakening brings the Autobots and Decepticons and their war to Earth.

It was a pretty good series overall and I glad that it has been collected into this 8 DVD set. If you are a fan of the series consider picking it up. You can pre-order Transformers Armada: The Complete Series

Brace yourself to relive some of the most astonishing TRANSFORMERS battles between the AUTOBOTS and the DECEPTICONS through the complete series release of TRANSFORMERS ARMADA. In 2002, TRANSFORMERS fans and kids were introduced to the animated television series TRANSFORMERS ARMADA. This is the unforgettable chapter of TRANSFORMERS lore and the first part of the rare UNICRON Trilogy – consisting of ARMADA, ENERGON and CYBERTRON. OPTIMUS PRIME, his team of AUTOBOTS and their human friends stepped up the fight against MEGATRON and his DECEPTICONS for control of the universe and the power-enhancing MINI-CONS, a lost race of TRANSFORMERS. Valor, deception and unexpected twists unfolded in these captivating adventures, leading to an unlikely alliance between natural enemies in the face of a genuine evil known as UNICRON.

On March 11, 2014, Shout! Factory, in collaboration with Hasbro Studios, will unleash TRANSFORMERS ARMADA: THE COMPLETE SERIES on home entertainment shelves everywhere. For the first time ever, the entire series is collected in one deluxe 8-DVD set, featuring all 52 memorable episodes. Whether reliving the childhood memory or discovering this series for the first time, this is an essential home collection for every fan, collectors and entire family to complete their TRANSFORMERS home entertainment library. This complete series 8-DVD set is priced to own at $44.99 SRP.

Synopsis:
Our heroes, the AUTOBOTS and their nemesis, the DECEPTICONS are at it again in this complete series of the TRANSFORMERS ARMADA. This series open to a war between the two factions of TRANSFORMERS on their home planet of Cybertron over MINI-CONS, a race of smaller, power-enhancing TRANSFORMERS. This struggle will bring AUTOBOTS, DECEPTICONS and MINI-CONS to earth, where they continue to battle, even after two humans get involved. Through the course of this series, the TRANSFORMERS face mysterious mercenaries, mighty MINI-CON weapons and even time travel as they fight for control or freedom.

About Hasbro Studios:
Hasbro Studios is the Los Angeles-based entertainment division of Hasbro, Inc. (NASDAQ: HAS). The studio is responsible for entertainment brand-driven storytelling for the company across television, film, commercial productions and short-form. It develops, produces and distributes TV shows based on Hasbro’s world class brands, including TRANSFORMERS, MY LITTLE PONY, LITTLEST PET SHOP and FAMILY GAME NIGHT. Many of these shows air on the Hub Network, a U.S. television network for kids and their families, that is a joint venture between Hasbro and Discovery Communications (NASDAQ: DISCA, DISCB, DISCK). Hasbro Studios shows can also be seen on networks in more than 180 territories globally. Since its formation in 2009, the studio has received seven Daytime Emmy wins and 16 nominations. On the film side, the studio is developing and producing a number of features based on Hasbro’s brands, including TRANSFORMERS: AGE OF EXTINCTION (Paramount), G.I. JOE 3 (Paramount) and CANDY LAND (Sony). The studio team also oversees the production of commercials that feature Hasbro’s brands as well production of short-form content that can be seen on all of the major digital and social media platforms globally.