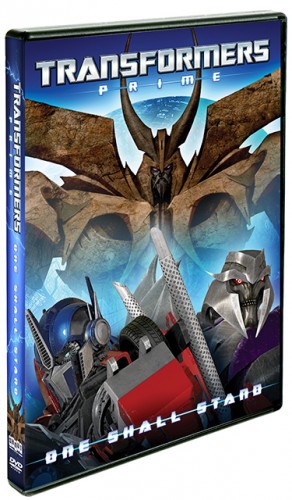 In the show Transformers Prime the characters, storytelling and action are amazing. The end of season one and the beginning of season two brought us a seven episode arc that not only celebrated the mythos of the Transformers Universe but turned it on its ear to truly tell the most amazing Transformers story I’ve ever experienced. Shout Factory and Hasbro have gathered the episodes together and woven them into an amazing seamless movie.

The story tells of Unicron, and how he figures into the planet Earth and how Unicron is awakened. Optimus must face Unicron with a very unlikely ally, Megatron. In this storyline we get The Matrix of Leadership, The Key To Vector Sigma and Unicron all in this one story, it was done so well and after the defeat of Unicron the story gets even more interesting.

As a kid from the 80’s who watched ever single Transformers episode ever and the 1986 movie and living through Optimus Prime dying and coming back the most shocking thing I ever saw happened in Transformers Prime in a teaser for season two where Optimus is show getting a Decepticon faction insignia welded onto his shoulder. Nooooo! This DVD explains all of these things and it is brilliant storytelling. You can own it on Tuesday July 31, 2012. Here are some clips and a full press release about the DVD.

For Immediate Release: TRANSFORMERS PRIME – ONE SHALL STAND
featuring the 7-part story arc spanning the first two seasons of emmy® award-winning series seamlessly edited together in this special presentation produced by hasbro studios

This summer, get ready for a special presentation of TRANSFORMERS PRIME for home entertainment. On July 31, 2012, Shout! Factory, in collaboration with Hasbro Studios, will debut TRANSFORMERS PRIME – ONE SHALL STAND DVD, featuring the compelling story behind the most iconic AUTOBOT ever, OPTIMUS PRIME, and an epic tale of deception, sacrifice, loyalty and triumph. Produced by Hasbro Studios, ONE SHALL STAND highlights the story that spanned the first two seasons of the acclaimed CGI animated series TRANSFORMERS PRIME, which currently airs on The Hub television network in the U.S and Teletoons in Canada. This action-packed story arc is edited together in a seamless, riveting special presentation for this home entertainment release. Packed with exciting bonus content, TRANSFORMERS PRIME – ONE SHALL STAND DVD delivers spectacular CGI animation and captivating family entertainment for all ages. This highly collectible DVD is priced to own with a suggested retail price of $14.97.

Fans can pre-order now on Amazon.com

With UNICRON’s awakening, extreme measures needed to be taken. An unlikely alliance formed between AUTOBOTS and DECEPTICONS to defeat UNICRON, a foe who could spell the end of the Earth. The action unfolds as the AUTOBOTS battle alongside MEGATRON against the evil UNICRON. Enemies became allies, allies became confidantes, and with the Matrix of Leadership, the planet Earth was saved.

Though at immeasurable personal cost, when OPTIMUS surrendered the Matrix, he lost more than the collective wisdom of the PRIME. He lost himself. With the power of the Matrix no longer within him, it would stand to reason that OPTIMUS has reverted to his pre-PRIME state as the historical archivist ORION PAX. MEGATRON manipulates the impaired OPTIMUS into joining the DECEPTICONS. But does the OPTIMUS and AUTOBOTS’ true key to salvation lie in the trusted hands of a teenaged boy named Jack?

About Hasbro
Hasbro, Inc. (NASDAQ: HAS) is a branded play company providing children and families around the world with a wide-range of immersive entertainment offerings based on the Company’s world class brand portfolio. From toys and games, to television programming, motion pictures, digital gaming and a comprehensive licensing program, Hasbro strives to delight its global customers with innovative, well-known and beloved brands such as TRANSFORMERS, LITTLEST PET SHOP, NERF, PLAYSKOOL, MY LITTLE PONY, G.I. JOE, MAGIC: THE GATHERING and MONOPOLY. The Company’s Hasbro Studios develops and produces television programming for markets around the world. Programming in the U.S. is distributed on The Hub TV Network, a multi-platform joint venture between Hasbro and Discovery Communications (NASDAQ: DISCA, DISCB, DISCK). Through the Company’s deep commitment to corporate social responsibility, including philanthropy, Hasbro is helping to build a safe and sustainable world for future generations and to positively impact the lives of millions of children and families every year. It has been recognized for its efforts by being named one of the “World’s Most Ethical Companies” and is ranked as one of Corporate Responsibility Magazine’s “100 Best Corporate Citizens.” Learn more at www.hasbro.com. © 2012 Hasbro, Inc. All Rights Reserved.

About Shout! Factory
Shout! Factory is a diversified entertainment company devoted to producing, uncovering and revitalizing the very best of pop culture. Founders Richard Foos, Bob Emmer and Garson Foos have spent their careers sharing their music, television and film faves with discerning consumers the world over. Shout! Factory’s DVD offerings serve up classic, contemporary and cult TV series, riveting sports programs, live music, animation and documentaries in lavish packages crammed with extras. The company’s audio catalogue boasts GRAMMY®-nominated boxed sets, new releases from storied artists, lovingly assembled album reissues and indispensable “best of” compilations. These riches are the result of a creative acquisitions mandate that has established the company as a hotbed of cultural preservation and commercial reinvention. Shout! Factory is based in Santa Monica, California. For more on Shout! Factory, visit shoutfactory.com.

Disclosure: I received a copy of this DVD for review. Opinions about it are 100% my own.