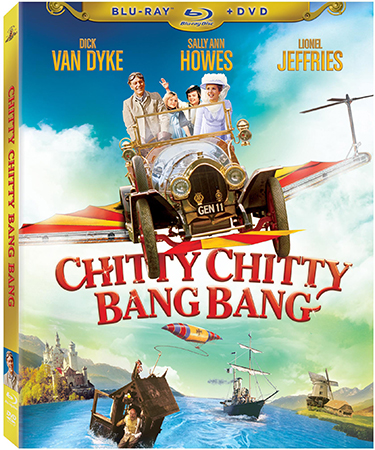 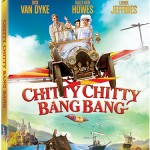 We received a copy of the recently released and re-mastered Disney classic movie Chitty Chitty Bang Bang. I remember seeing the movie as a child and I believe I remember it pretty fondly as it had some fun aspects to it: flying car, fun characters and humor. Watching it again as an adult I actually “got it”. I never actually realized that the amazing Dick Van Dyke (the guy is incredible) was a single dad raising two kids and he told the kids this fantasmagorical story. I missed that whole point as a child. I never realized that until we watched the movie together this past weekend.

I don’t think that Eva was really into this movie. She is three and she loves, loves, loves Marry Poppins. She loves Dick Van Dyke as Bert and all through Chitty Chitty Bang Bang she was wondering why there as “another Bert”. She was also scared by the strange guy who captured the two children of Dick Van Dyke’s character. Overall it kept her attention for a good hour, she liked the car and loved the dancing and music. While not as appealing as Mary Poppins it is a pretty decent little movie. I did like the beautiful on location filming spots too. You can see the trailer for the Blu-ray below.

The movie was released on Blu-Ray/DVD Combo pack on November 2, 2010. You can read the full release below.

“LOS ANGELES, CA. – On November 2nd families everywhere can experience “fantasmagorical” adventures, legendary sing-alongs and magical moments like never before as MGM Home Entertainment releases an all-new remastered version of Chitty Chitty Bang Bang on Blu-ray. Enjoy the fun of this family classic for the first time on Blu-ray disc with upgraded 7.1 DTS-HD master audio and new interactive games. An original version of the film on DVD will accompany the all-new remastered Blu-ray.

Based on the children’s book Chitty Chitty Bang Bang: The Magical Car by Ian Fleming, the film tells the story of an eccentric professor (played by Dick Van Dyke) who invents wacky machinery, but can’t seem to make ends meet. When he invents a revolutionary car, a foreign government becomes interested in it, and resorts to skullduggery to get their hands on it. The all-time family classic evolves from there and viewers are taken on a magical ride with the professor and loveable motorcar.

As part of “the most fantasmagorical musical entertainment in the history of everything!” the remastered version of Chitty Chitty Bang Bang on Blu-ray will feature special interactive features for families everywhere to enjoy from the comfort of their own homes, including an all-new “Toot Sweet Symphony” melody maker and “Chitty Chitty’s Bang Bang Driving Game!” Other special features include “Remembering Chitty Chitty Bang Bang” with Dick Van Dyke, song demos from the Sherman Brothers and a featurette entitled “A Fantasmagorical Motorcar.”

Do you have fond memories of this movie? Please share them with me below.

Disclosure: I was sent this free copy to review. The opinions about the movie are 100% mine.