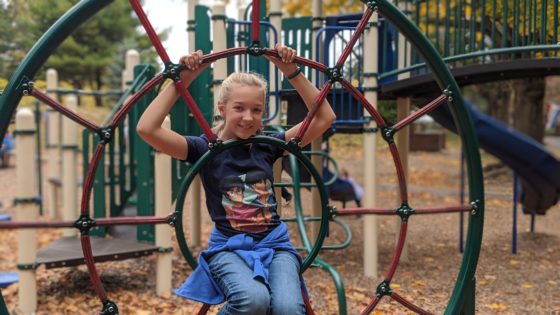 We spent this afternoon celebrating Eva’s birthday. She had a bunch of girls from her class over along with their parents and her cousin, Shaylee. This was a low key birthday and that worked out really well. Eva wanted to do a photo scavenger hunt over at the park and so she set up two teams of her friends and we had a third team that had Andrew and one of his friends from school who has a sister in Eva’s class. I think this was great for Andrew because he has been having a difficult time at school and some one on one time with a classmate might help with the feelings that he’s been having lately. They seemed to have gotten along really well.

The girls had a nice time. The scavenger hunt went well and it was over quickly. We had allotted an hour for it but only really needed about 15 minutes. Maybe a longer list next time or something. The kids played at the park and had fun after everything was over.

I added one thing to the list and that was to get a bullseye thrown the Zax foam axes. There was no place to mount the target so I held it up in front of my face so they could all take a turn throwing the axes. I did not get too dinged up.

We returned home to cake and ice cream. Eva’s theme was a cross between Percy Jackson and Harry Potter. She had a cake with the Deathly Hallows symbol on it but the cake itself was blue to represent the blue foods that Percy’s mom would make for him. I have to say, Eva’s friends know her well. She received An Unlikely Story and Joann gift cards, some wigs and drawing tools. She was thrilled.

When all the guests left we had pizza with my mom, dad and our friend Colleen. It was a nice day to celebrate Eva’s birthday.