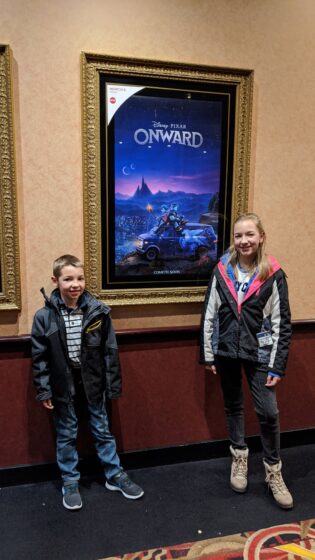 Tonight we went into Boston to see the movie Onward. It arrives in Theaters on Thursday. We adored this movie It was so heartfelt and genuine with great characters and complex family dynamics. It is an excellent family movie. We had advanced press screening passes to see the movie and I am very glad because this was a movie that Andy has been looking forward to seeing or a while. He’s been reading the books, mostly the one of puns and jokes, and mentioned it every time the commercial came on TV. I think he even convinced Allison to take him to McDonald’s because there was an Onward Happy Meal.

The movie stars Chris Pratt and Tom Holland as elven brothers Barley and Ian Lightfoot. They are on a quest to bring their father back for one day. As you can see from the commercials the spell does not go quite as planned so the go on this journey. There is so much more to the journey than what you see in the commercials. Here are a few videos that delve behind the scenes of the movie, but no spoilers.

The cast speaks about the movie.

Oh and these guys are hilarious as they do a reaction video to their own movie trailer.

The movie was directed by Dan Scanlon who was the first Pixar director that I had ever met back on my very first Pixar trip with Disney. Back when I was a part of that crew. The trip was for Monsters University and I got to have a great conversation with Dan. The guy knows how to make emotionally touching movies from the heart. Or rather from his heart’s fire. This movie was inspired by livfe with his own brother. You can read the interview about the Monsters University Event and then please go and see Onward. It was very special. When the movie was over we all had our favorite part and it was the same for everyone. I bet it is for you as well. More about the movie below

When teenage elf brothers Ian and Barley Lightfoot (voices of Tom Holland and Chris Pratt) get an unexpected opportunity to spend one more day with their late dad, they embark on an extraordinary quest aboard Barley’s epic van Guinevere. Like any good quest, their journey is filled with magic spells, cryptic maps, impossible obstacles and unimaginable discoveries. But when the boys’ fearless mom Laurel (voice of Julia Louis-Dreyfus) realizes her sons are missing, she teams up with a part-lion, part-bat, part-scorpion, former warrior – aka The Manticore (voice of Octavia Spencer) – and heads off to find them. Perilous curses aside, this one magical day could mean more than any of them ever dreamed. Directed by Dan Scanlon and produced by Kori Rae, Disney and Pixar’s “Onward” opens in U.S. theaters on March 6, 2020.