Today was a pretty awesome day. At 9am the Chevy Camaro Convertible arrived. It is bright yellow! I was so excited because I could drive BumbleBee around for the better part of the next week (more on that later). I signed my paperwork and got the keys. The guy dropping it off asked if he wanted me to have him pull it into the driveway. I said no thanks and took off up the road. I drove the car up by the farms on Ellis road with the wind flying by, it was Awesome!

I got back to the house, and tweeted that I’d bee driving BumbleBee for the week, I put the carseat in the back. There is a latch system in the car and even though there is barely a back seat in the car there was enough room for Eva’s seat and for her to sit comfortably. 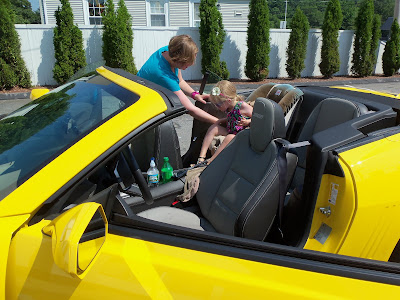 It is crazy hot in the Northeast today and I was sweating big time after installing the seat. I went upstairs and showered and changed, collected Allison and Eva and we hopped into the car.

I used my TeleNav app on my DROID to get directions to Evelyn’s Drive-In in Tiverton, RI. I liked using the app because I could get an approximate ETA at any time. I could then tell Eva how much longer it would be before we got to our destination. 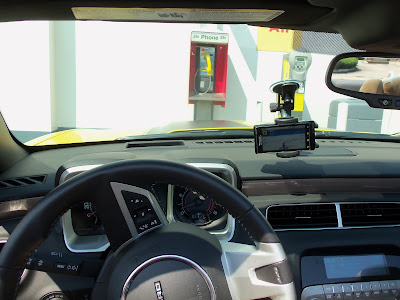 Stopped for a potty break, there is my TeleNav app running.

She enjoyed the convertible for a while and then wanted the roof up because she doesn’t like the wind too much. We put up the roof when we got to Evelyn’s and we were pretty early for lunch so we took the car for a ride around the area.

I used the TeleNav app to search for places around where we were. I wasn’t sure if we were close to Buttonwood Park Zoo so I typed in Zoo and I discovered a place that I’d really love to get to on another family trip, The Butterfly Zoo. If we decide to go there I’m going to need my DSLR. Also it was so hot that a zoo might not have been the best place to go. So we just drove.

Our driving took us to Courtyards. This collection of shops had some very interesting finds. There was a beautiful children’s clothing shop and another shop with a bunch of outdoor statues and these flowers made out of old china and glass place settings that were mounted on rebar. Those were pretty cool. 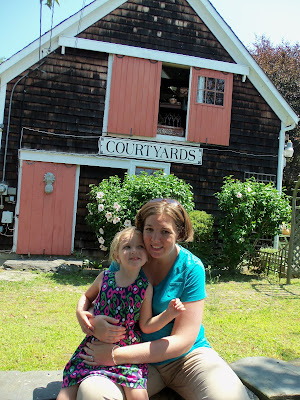 Today was about discovery and fun and being together as a family. It is always hard on Fridays because that is the day that daddy goes back to work. Even though I’m home so much more than before it is still hard when Friday rolls around and I have to go back to work. So when we can do some fun stuff on Friday morning and early afternoon that is good, it sort of eases Eva into the weekend.

After we were done at the shops we drove back to Evelyn’s and the place was hopping. we were lucky to get a seat inside but we did. You see, I chose Evelyn’s because I wanted to eat by the water, but with temps in the 100’s I did not want my 3 1/2 year old daughter, my pregnant wife and my chunky butt getting blasted with heat exhaustion. So we were lucky to get inside.

Allison and I went to Evelyn’s a number of years ago (in 2004!) and I remember the giant seafood platter. I secretly wanted to get that again but I wasn’t sure if Allison could eat much of it. Well, she wanted to get it too and we split that and Eva enjoyed some as well (and chicken fingers, the staple of the toddler). Eva also wanted clam chowder. She does not like the clams or potatoes in it, just the broth. So funny. She was excited to have a big menu too. 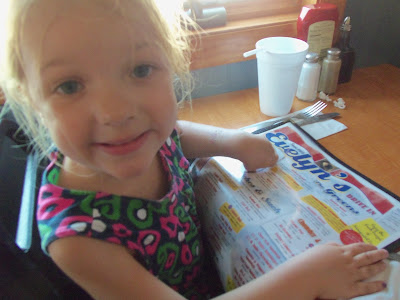 She told our server that she must have thought that Eva was older because she gave her an adult menu. Eva did get a kids one too and crayons. We colored a bit as we waited for the food. It came very quickly too and it was well worth it! 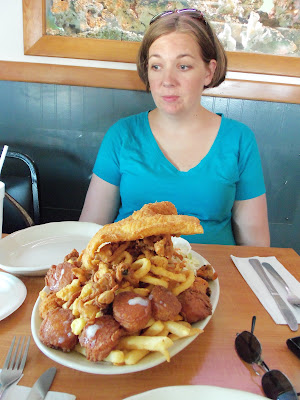 With butter on the scallops, perfectly light and buttery, the best I’ve ever had.

This platter was a monster. We didn’t go for the lobster addition this time. I thought it was pretty small last time and not worth the extra $6 for it. Besides the Company picnic is coming up and I’ll have my yearly lobster there. But the scallops, Shrimp, Calamari, Whole Belly Clams, Fish, Clamcakes, Fries and Cole Slaw were so delicious! We brought some home too. We couldn’t eat it all but man we tried. 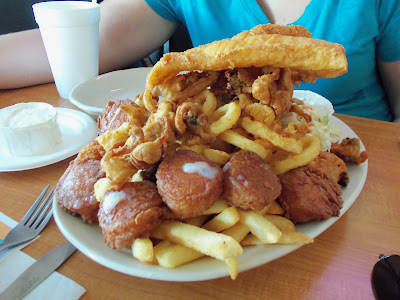 This thing was seriously HUGE!

When our lunch was done we headed out to the parking lot to get back into the Camaro, now with the top up, and headed home. We stopped and took the family photo but it was insanely hot out so we didn’t take a bunch of photos as I had intended. But I took this one. 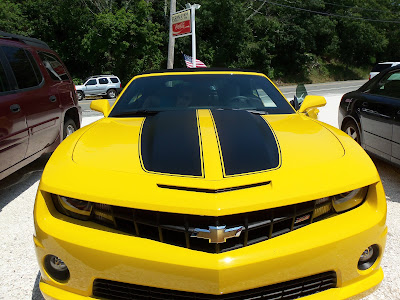 We had a fantastic family adventure. It was too much for Eva because she was zonked out asleep before we left the Eveyln’s parking lot.

Here is a video that I made of our adventure.

You can find out more about TeleNav through these different outlets.

Disclosure 2: I am testing out a Chevy Camaro Convertible for the week. I have some contacts at Chevy and I asked them for the car. I’ll be blogging about it and my adventures as well as those of my Dad, Allison and my friend Rob Merlino (We’re doing a Hot Dog Adventure on Wednesday). The opinions that we will share about the car are 100% ours.
You can learn more about the Chevy Camaro.

Disclosure 3: I combined two things in this one post, there is no official association between Chevy and TeleNav. I just used both on the trip. I also used my Kodak Cameras and my XShot. I use what I have, what I’ve been given and it becomes part of my daily life.