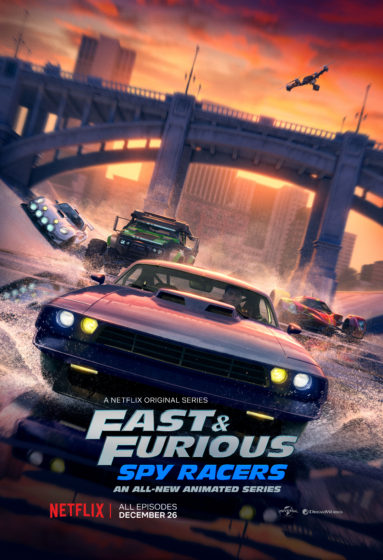 I am a fan of the FAST & FURIOUS movie franchise. This super fast, super flashy and super stunt filled set of movies is now getting a version for the younger crowd. A new series on NEtflix is set to debut on December 26th, FAST & FURIOUS: SPY RACERS. This animated series follows the cousin of Dom Torreto, Tony Torreto. One can only hope that in at least one episode Vin Diesel will grant his gravelly voice to the character of Dom and seal this series as complete canon into the world of FAST & FURIOUS. It would be so perfect if he did. Plus he would be working with his daughter Similce Diesel. There are so many people who could guest star in an episode and work with the kids. Check out the trailer below and see what the action looks like.

I hope that we see the theme of family within this series. Family is everything was a huge part of the FAST & FURIOUS movies. I am pretty sure that Dreamworks will do this right and make family of central importance. 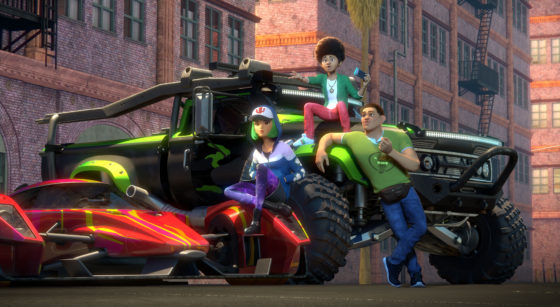 Here’s some official word on the show and what it will be all about. Also, I should be getting some screeners to check out the show early and will be posting my thoughts for you. 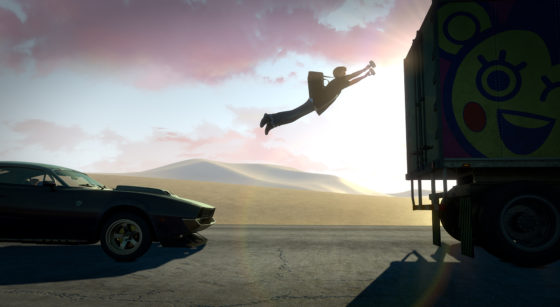 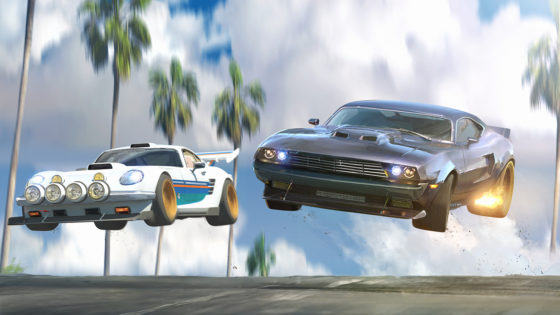 About the Fast & Furious Franchise:
Over the course of nine films that have successively stoked passion in an ever-expanding audience and earned nearly $6 billion at the worldwide box office, Universal Pictures’ record-smashing homegrown franchise has become the studio’s most-profitable and longest-running one. Across social media platforms, fan following for the movies and cast has grown into the biggest of any active franchise. On the heels of The Fate of the Furious, which debuted in theaters as the biggest global opening of all time, the blockbuster franchise has expanded to a multitude of offerings – from toys and video games, to an all-new animated series and successfully launched spin-off franchise. The Ninth Chapter in the Fast & Furious saga hits U.S. theaters May 22, 2020.

About DreamWorks Animation:
DreamWorks Animation is one of the world’s leading producers of high-quality, animated family programming, reaching consumers in more than 190 countries. Creating a diverse array of original content in a variety of formats and delivering deep, fully immersive worlds served up with compelling characters, the prolific studio has garnered 25 EmmyⓇAwards since inception in 2013 and is home to such beloved series as Trollhunters, Spirit Riding Free, She-Ra and the Princesses of Power, Trolls: The Beat Goes On!, The Boss Baby: Back in Business, Kung Fu Panda: The Paws of Destiny, Voltron Legendary Defender, The Epic Tales of Captain Underpants, Dragons: Race to the Edge, All Hail King Julien, The Adventures of Puss in Boots and the recently released 3Below. DreamWorks is a division of the Universal Filmed Entertainment Group within NBCUniversal, a subsidiary of Comcast Corporation.

About One Race Films / One Race TV
One Race Films, founded in 1995 by writer, director, producer and actor Vin Diesel, has produced the five highest-grossing films in the “Fast” franchise — “Fate of the Furious,” “Furious 7,” “Fast and Furious 6,” “Fast Five” as well as “Fast & Furious.” He has directed “Multifacial,” “Strays” and “Los Bandoleros.” This February, Sony will release the ORF produced Bloodshot, also starring Diesel, and has previously launched multiple franchises in the action genre, including the science-fiction thriller “Pitch Black” and the two follow-up films, “Chronicles of Riddick” ​and “Riddick,” along with the hit “xXx” franchise. In addition to a thriving film production company, ORF launched One Race Television and gaming company Tigon Studios. ORTV has a first-look deal with Universal Television and is currently developing projects with NBC and Fox and in production with DreamWorks Animation on the Netflix original series “Fast & Furious: Spy Racers.” Tigon Studios has produced three critically acclaimed console titles including “Chronicles of Riddick: Escape from Butcher Bay” and original property “The Wheelman.”