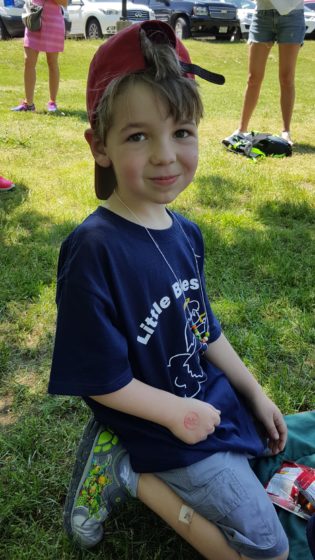 I flew in from California this morning in time to get to my parents’ house to pick up Andrew. Today was Andrew’s field trip to the Capron Park Zoo. We went home and then walked over to the Zoo. We were there early and so Andrew got to run around and play on the playground before going into the zoo. It was really hot today. I had just left nice weather in San Diego (The locals would say it was too cold but I liked it. It was 93 upon returning home.

The zoo was a nice field trip. I missed it last year, I think because I was at the PBS Annual Meeting. Each of the kids received papers with all the letters of the alphabet and a clipboard. They had the task of finding something for every letter of the alphabet. It was a nice activity that made the trip to the zoo more than just looking at the animals. We ended up being there a day early for the new Red Panda. We’ll have to go back soon.

Tonight we went over to Bliss for dinner. They changed up the menu and I tried something a bit different. I ordered the breakfast burger. This was a burger on french toast with an egg and bacon. It was different but tasted great.

Before bed Andrew came in and he was so excited because he has his first wiggly tooth. I’m excited, too because Eva’s been losing teeth like crazy ever since she was 4 years old or so. This is Andrew’s first and he’s all happy, some of his classmates have already lost teeth and I know he wants to lose some too.