This afternoon I spent helping my dad get his new office and storage unit set up. Office for him, storage unit for everyone else, he’s getting that look like living out in the woods all alone is sounding better and better. Dad got Comcast Cable Internet, or broadband or whatever. I set it up on my mother’s computer. While I was setting it up. I heard these panicked cries, they sounded like the cats, so I ran into my apartment and the cats were fine. I went back to the computer, then I heard some sirens and they were coming up the street.

Apparently a guy at the house was working on his car. Hey was taking bolts off of a gas tank. The tank had been drained and the gas put into a bucket. A spark from the grinder on the bolts ignited the gas in the bucket. The second guy working on the car grabbed the bucket to throw it outside, he tripped and spilled it on the first guy. Who ran across the street on fire and ended up on my next door neighbor’s lawn.

My next door neighbor helped put out the flames and another neighbor called the fire department. We live literally 30 seconds from both the police and the fire station and that was about how long it took them to get here after they were called. The N.A. Fire and Police Departments are very prompt. Meanwhile the fire spread from the garage to the house and whipped through the first floor of the house. Here are some pictures I took of the event. 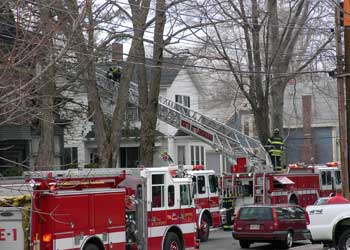 I have no idea how they were able to get that ladder up in that space. 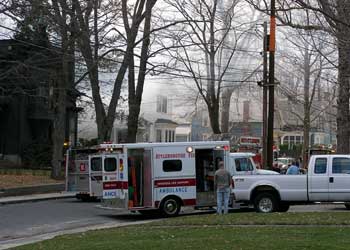 This was right after we got outside. There would be two more ambulances and three or four more fire trucks within the next five minutes. And I couldn’t believe how many people came from all over to see what was going on, people kept coming up from down the street. I can still see people milling about. And this occurred at 1:00 today.

Also the guy was badly burned but he was conscious when they put him in the ambulance. He looked alert and hopefully will recover.

One thought on “Fire on Church Street….”