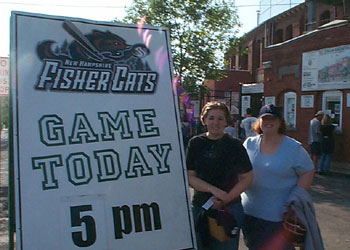 Yesterday Allison and I along with her parents (Marcia and Dan) and her brother Nate and his girlfriend Sarah, and Allison’s friend Jess and her husband Eric went to the New Hampshire Fisher Cats Game. And of course our friend Maureen, a.k.a Mo also came to the game with us. In her own words, “I better make the Blog!”

So yes, Maureen, you have made the Blog and with photos to prove it! The stadium, (Gill Stadium in Manchester) is really nice now with all the renovations. The field is also very nice. We sat in the bleachers on the first base line. We had the last 9 seats in the far back of the bleachers, which were occupied when we arrived so we sat in some unoccupied seats. Once the people arrived and claimed their seats we moved up to our seat. A big bru-ha-ha (sp) with the “Usher” (read “Bouncer wannabe“, and if you have ever heard Ron White talk about bouncers well this would be that sort of guy.).

Actually there was no real bru-ha-ha it was just that the “Usher” was an unpleasant, power hungry, sort that we instantly disliked. I have to say at this point that we, Allison and I, really miss hanging out with Maureen and yesterday we were very glad to spend time with her.

As for the game the Fisher Cats ended up pulling off a win. Jess and Erik had to leave early but were almost tempted to stick around for S’mores (more on that further down). It was nice to spend time talking with Jess and Erik as well.

After the game Allison and I went home with Dan and Marcia while Sarah and Nate came back to the house as well. We finished up the Coronas that we had for the pre-game cook-out on Dan’s new grill. We had big juicy burgers and Johnsonville Brats that were soaked in Guinness and chopped onions. We also had Ken come by before the game for the BBQ. It was nice to see Ken and hear the good news that he is done with the NE-10. Good luck Ken.

So back to the post game activities. For post game we sat on the back porch at Dan and Marcia’s and finished the Coronas, dug into the Bud Lights and had 11:30pm Burgers. We also had fun with the Chimnea. The S’mores were cooked on the Chimnea. Allison was the master S’mores chef. We had a great day yesterday and were very happy to spend it with family and friends. Oh and there are pictures…. 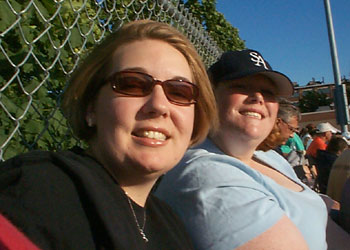 Allison and Mo at the game! 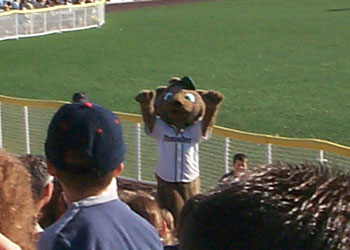 The New Hampshire Fisher Cat Mascot waves to the crowd. 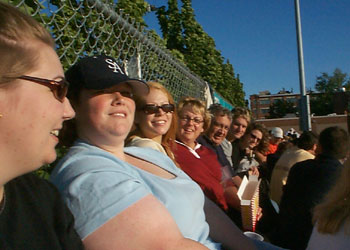 The Gang at the game. Nate refused to look. 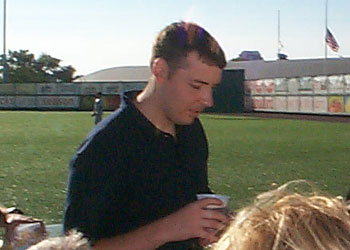 You never know when I’ll get your picture, Nate. 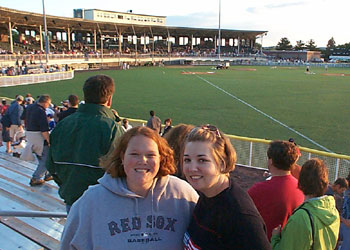 Allison and Mo after the Fisher Cats win!