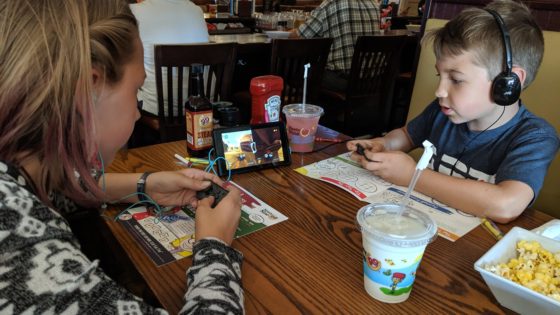 Got home from work this morning and took Allison’s car to the shop. It had been stalling for some reason. We found out later it was a simple fix and wasn’t as major a hit to the wallet as expected. I was grateful for that. There is no mechanic like our mechanic out there. He knows his stuff and is quick and fair.

I had mentioned to Allison that I wanted to see Spider-Man: Far from Home soon. Normally I’d just go during the day while everyone was at school and then we’d all watch it when it came out on DVD. However, Allison had not seen Avengers: Endgame yet so we decided to go to the Cinema pub and see it. Our friend Colleen agreed to watch the kids. We were dropping off the kids to her before the showing. but we needed to eat.

I’d been writing a post for The Toy Insider on portable video game systems and so I brought along the Nintendo Switch to get a photo of the kids at dinner and show how the Switch was good for multiple people playing anywhere. We were at The Ninety-Nine. We went there because kids eat free after a Red Sox win. That is all well and good but when there is a Lobster BLT on the menu it tends to balance out. Allison and I split that. We only had the Nintendo Switch system out for this photo and one race. I do like how that system can be brought places for fun.

It was good to see Endgame again, although I am pretty sure I missed key points because it was 3 hours long and I know I started to nod off several times. But we are ready for Spider-Man next week when the kids are in camp.