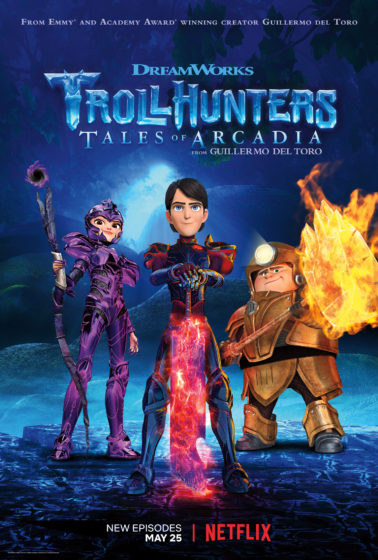 I have been eagerly awaiting the return of DreamWorks Trollhunters Part 3. This is the final season of the show that I have loved from the minute I watched the opening credits of the first episode. It is an incredible adventure that is for the whole family. There is great humor, courageous action and stunningly beautiful sets. When Season 2 came out I won a set of Trollhunters action figures from Funko through the Week99er website. I never opened them, until today. Here is my unboxing video.

I had fun with that one and tweeted it out, later in the afternoon I received a notification that the show’s creator, Guillermo del Toro, retweeted and liked my tweet. I was blown away!

I spent the morning watching the first six episodes and they are amazing!! I cannot wait to watch the rest and then re-watch the whole series with the kids.

I have more about the new season below.

The glory of Merlin is finally yours as the last chapter of the DreamWorks Trollhunters saga premieres on Netflix today, May 25th! In DreamWorks Trollhunters Part 3, the fate of troll and human civilizations hang in the balance. The Trollhunters are racing to stop Gunmar and the now resurrected Morgana from bringing about the Eternal Night and shrouding the world in darkness forever. To defeat them, the team must seek the help of the legendary wizard Merlin to unlock his ancient magic and unleash a powerful weapon that will alter the course of their lives forever.

About DreamWorks Animation Television:
DreamWorks Animation Television is one of the world’s leading producers of high-quality, animated family programming, reaching consumers in more than 190 countries. Creating a diverse array of original content in a variety of formats and delivering deep, fully immersive worlds served up with compelling characters, the prolific studio has garnered 22 Emmy? Awards since inception in 2013 and is home to such beloved series as Trollhunters, Spirit Riding Free, Trolls: The Beat Goes On!, The Boss Baby: Back in Business, Voltron Legendary Defender, Home Adventures with Tip & Oh, Dragons Race to the Edge, All Hail King Julien and The Adventures of Puss in Boots. DreamWorks is a division of the Universal Filmed Entertainment Group within NBCUniversal, a subsidiary of Comcast Corporation.