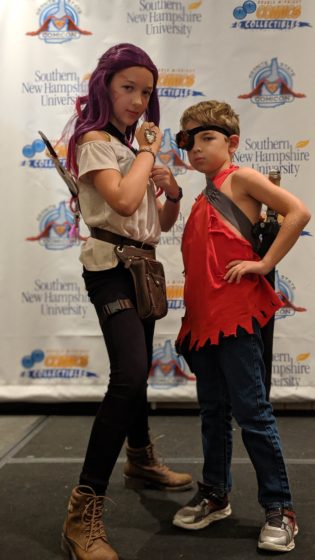 We were invited by the creators of the Granite State Comicon to come up as guest of the convention. Prior to the convention I promoted the Comicon and even gave away a set of family passes.

On our second day at the Granite State Comicon the kids got dressed in their original character costumes for the kid’s costume contest. This was what both of the kids were most looking forward to doing. Eva had worked so hard coming up with her character and creating the backstory and the costume. She put on some scar makeup and was ready to go. she then set that up for her brother as well. The kids looked great and they were ready to check out what day two had to offer.

We walked downstairs and started in the main room were all the vendors were. Andrew got a special 3D printed Groot that changed colors with heat from your hands. It is a display item and not a toy. Groots head partially came off throughout the day from being hit with a water bottle. More about Groot tomorrow. 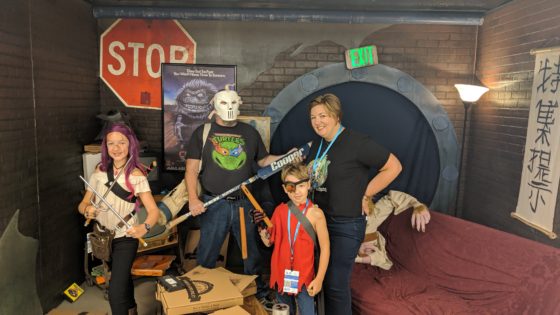 A fun thing that they did for the con was set up a special area where people could pose in the TMNT sewer lair. They even had a puppet Master Splinter there that people could interact with. There were some great photos taken there with the voice cast actors and Kevin Eastman. We just didn’t have the money to shell out for that so we made a small donation and took some cell photos. 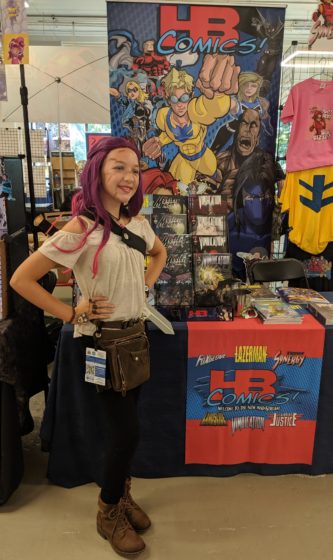 As we walked around one of the booths asked if they could take a photo of Eva in her costume by the booth. Then we stopped and picked up a comic book series for her from that booth. 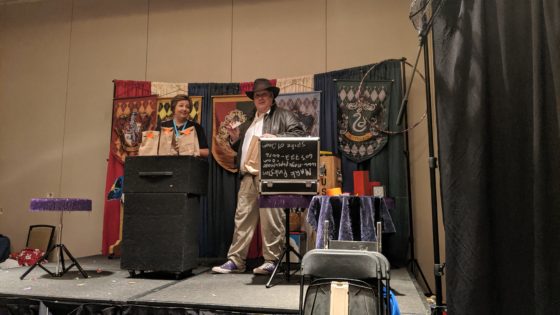 We walked around a little bit more and then headed to the other side where we caught a pop culture comedy magic show. It was okay but we were practically the only people there. We all got to participate. Even Allison.

We stayed for the entire show and afterwards the kids wanted to go and play so they went off while I sat in on the session where all four of the original voice cast members of the original Teenage Mutant Ninja Turtles cartoon spoke. I was thrilled! This was one of the things that I really wanted to see. I wish that the kids had more of an interest in it. They enjoy the turtles but are not as into it as their dad. 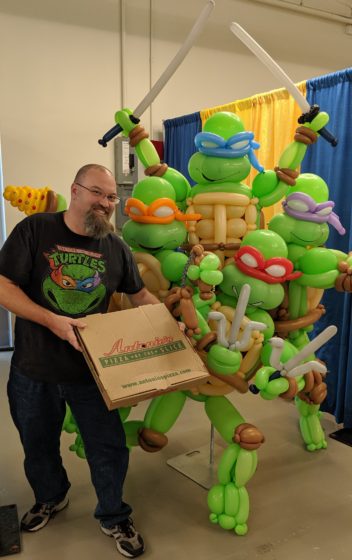 when I got out of my session I met up with Allison and the kids. We walked around the main floor again and this time I met Dan of Dan’s Balloons. He made an amazing TMNT balloon sculpture. I asked Chris, one of the organizers to take a photo of me with them. I am realizing now that I did not eat any pizza all weekend! How is that possible! 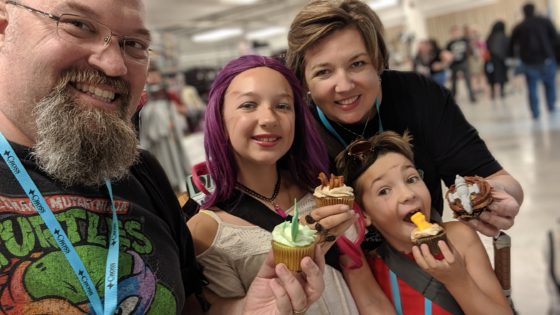 We wanted a little snack so we went to Quigley’s Cupcakes and each picked out a special cupcake. They had an amazing selection of cupcakes. I had a key lime one that was themed for Pokemon. Allison got a peanut butter one that was themed for Firefly and Andrew got a s’mores one that had a Thanos theme Eva’s was a Maple Bacon one. That kid loves her bacon.

It was about time for the costume contest so we went over to get ready. The kids did a good job. While they weren’t properly introduced as original characters. They were introduced as being from the O.C. That was weird. Since we signed up first the kids went first. That had to be nerve wracking.They did a good job though. Even though they did not win (There was some major competition) they had a good time and afterwards they even got a photo with Loki. 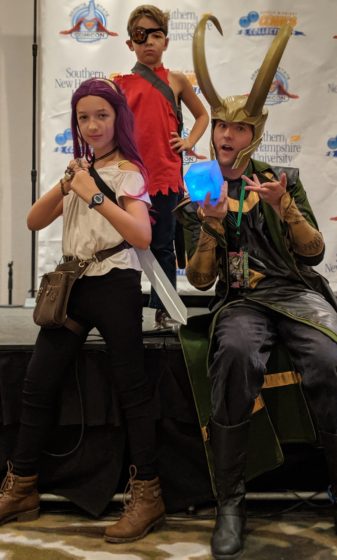 We finished up and headed home. Everyone was exhausted but had all had such a wonderful time at Granitecon.