Today we went up to Providence Place Mall because we needed to get Allison’s iPhone fixed. For some reason her phone stopped allowing her to make normal calls. She couldn’t talk to anyone unless she was on speakerphone. So, technically the phone still worked but it just doesn’t work well with a one year old in the house. Every call that Allison made was punctuated with Andrew thinking the call was for him and he enthusiastically babbled to the caller. Except when the call was actually for him.

We got to the mall and walked around for about an hour. We were going to check out the phone that I’m reviewing because it wasn’t making calls. I made a call the moment before we left and it worked fine. So, no reason for me to go to the AT&T store. We poked around and there was a GameStop in this mall. I’ve been looking for the Scorpion Striker Battle Pack with Zap and Hot Dog which is exclusive to GameStop for this month. It was a whole fiasco trying to find it at the GameStops near me and I figured what the heck I’d try at this mall. There were none of those sets in the store. Allison suggested that I ask the guys at the counter if they had any more in the back. I didn’t think that they would but I asked. They didn’t have it but the guy said. I bet you’d like what we just received, though. Behind the counter they had a small box with two new Giants figures: Eye Brawl and Thumpback. I was thrilled but Eva was even more thrilled. The guy at the counter was impressed that Eva knew everything about Skylanders. 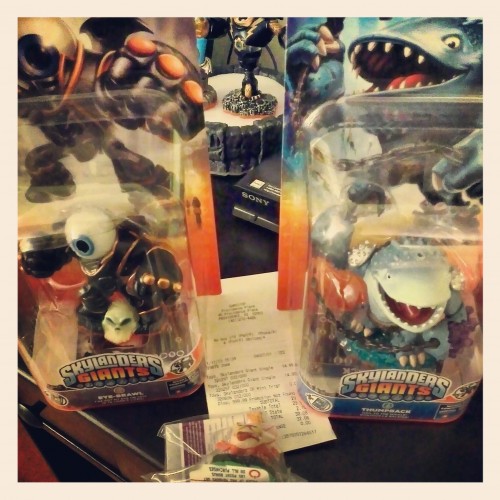 The folks in the Apple Store were great and they replaced Allison’s phone. This is the second time that the phone has needed to be replaced for the same issue. It is really weird that this happened. But there was no issue getting it replaced.

We had dinner at the Cheesecake Factory and it was fun. They saw Andrew and asked if we wanted a child’s plate. They brought one with bread and bananas. Andrew plowed through that. When we go to eat now we have to have at least a 4 foot radius around Andrew that is free of ANYTHING that he can grab, move, stuff into his mouth because he grabs every single thing that is out there. He’s got a crazy reach too.

We got home and Eva wanted to see each of the Heroic Challenges for our new figures so we played for a while together so she could see the new characters in action. She loved playing as Thumbpack and I enjoyed Eye Brawl. They are both great new characters.