Today was Halloween. We were lucky in that our Halloween was not cancelled and postpones like many other towns near us. We were able to go trick or treating around our neighborhood, visit Memere and also Aunt Corrine. We even got Caramel Apple ice cream and Monster Mash ice cream at the Ice Cream Machine with Auntie Tara. 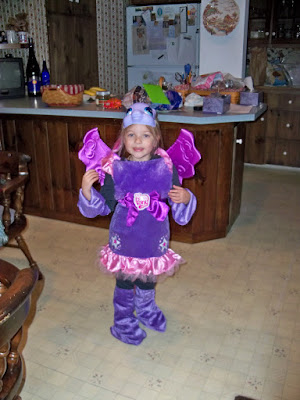 Eva wanted to be a My Little Pony this year she specifically wanted to be a Pegasus pony. The only Pegasus pony that came with wings was StarSong. Eva has been so excited to tell everyone that she would be a pegasus. And she was a right cute one to boot.

We went over to the ELC to drop off paperwork for a backpack campaign for Allison’s Barefoot Books business. This is a great win for her and she’s done a ton of work to prepare for it as well. We’re pretty excited for this to get off the ground.

We went from there to the Ice Cream Machine. There we met up with my sister Tara and her Cross Country team. Tara takes the team to the Ice Cream Machine each year and they take a group photo. Tara asked us to come along because Eva loves spending time with the girls. Monster Mash icre cream was awesome. Oreos, M&Ms, White Chocolate Chips and Marshmallow in an orange colored vanilla based ice cream. Very tasty.

Eva went Trick or Treating at Memere’s first. There she got some candy and a stuffed Minnie Mouse dressed as a witch. Eva was so thrilled with that.

We also were visited by Uncle Mike who came down and gave Eva her birthday gift. He was thrilled to see her and said that her energy would be what would keep him going through his shift tonight dealing with knuckleheads on the roads.

We went to visit my Aunt Corrine and her family. Eva plays with her cousin Amanda often and the two kids love to play together. Amanda was a fairy witch. The they were so cute together tonight. They even went and did some Trick or Treating for one house before we headed back to our own house. 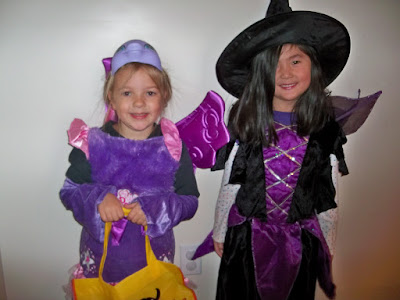 Once we got home we hit the back door, went right out to the front door, put out all the pumpkins to the front steps, lit them poured the candy into a bowl and we were taking Trick or Treaters. It wasn’t a very heavy night but there was a decent showing. We did well with the candy that we had in the house.

I took Eva Trick or Treating around the neighborhood. We went to about 10 houses and met some more neighbors. I asked many of the neighbors what to expect tonight as far as volume. They said that on weekends they get about 60 or so kids. I think we had about half that tonight. We stayed out on the porch until about 8pm as things began winding down around 7:35. Eva and I gave out candy to the kids after we had gotten back from our own Trick or Treating. The neighborhood had some pretty decent decorations and many of the houses were lit up and giving out candy. It was a very nice night. I had my Blue Angel FyrFlyz with me and I was spinning all sorts of colorful designs as we walked. Also a lot of people liked our carved pumpkins 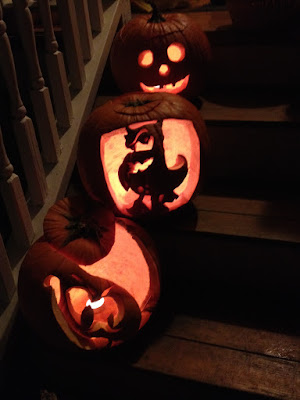 and my Zac Brown costume.