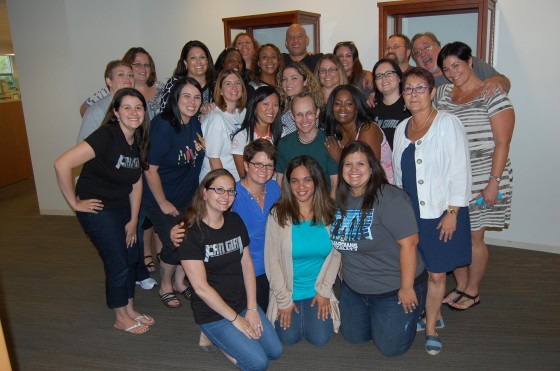 How does one decide to take on the role of a seven foot tall tree-like creature who says three words over and over? You have your kids help you out. That was the case with Vin Diesel deciding to play Groot the gentle yet extremely dangerous character in Guardians of the Galaxy. Groot may only say one phrase over and over, “I Am Groot” but as blogger Mitch of Gay NYC Dad puts it, “He says so much.” That may have been another one of Mitch’s clever quips but he certainly is not wrong in that statement. Groot is a character that communicates so much with his actions and even the inflection of his simple phrase that he does say so much. And actor, Vin Diesel, had even more to say on the subject of his character, Groot.

This past week I was on an all expense paid blogger trip sponsored by ABC Family (#ABCFamilyEvent, #MysteryGirls, #YoungandHungry, #ChasingLife), Disney (#GuardiansOfTheGalaxyEvent, #BigHero6) and DreamWorks (#100FootJourneyEvent). The opinions expressed in this post are 100% mine unless of course they are credited as a direct quote of someone else. 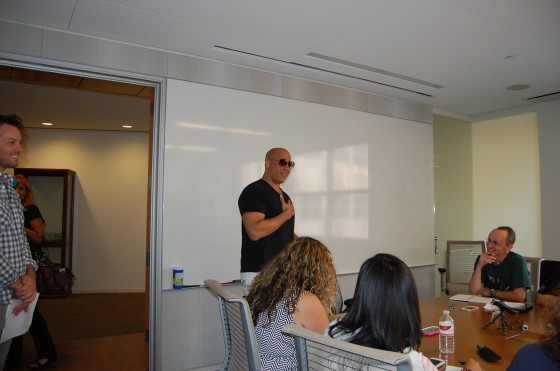 Vin Diesel entered the meeting room where 22 mommy bloggers and 3 dad bloggers sat eagerly awaiting the star. He arrived to much applause to which he replied, “Guys, you didn’t have to make me feel THAT good!” Ever the entertainer and showman he then added, “I’m going to do that again.” He promptly exited the room and returned to even more applause. Then we got down to the business of discussing Groot.

As I mentioned above Groot is a tree-like creature who is part of the Guardians of the Galaxy. He is best friend to Rocket, and they have been together so long that Rocket can understand what Groot is saying when he says, “I Am Groot.” Groot has an innocence to him and a curiosity like that of a child. However, because he is seen as simple he is easily underestimated. Groot is, in fact on a level of strength equal if not surpassing many of the Marvel Super Heroes. 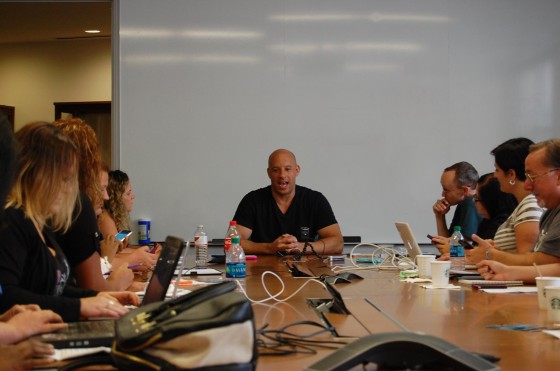 When Vin came back in and sat down to talk with us about Groot he immediately noticed the shirt that Kristin of It’s Free At Last was wearing. She had a great shirt of Rocket and Groot that she found on Red Bubble. I was seated way in the back so he never did see my Groot and Rocket, in the style of Calvin and Hobbes, shirt that I got from Red Bubble. He was however, so happy that people were wearing Groot shirts. The majority of the bloggers in attendance had on Marvel shirts and the most prevalent character on the shirts was Groot. We love Groot.

When asked,”What attracted you to the role of Groot?” Vin told us about how he got the role of Groot. He attributes his connection to working on a Marvel movie to his Facebook fans. Vin recognizes the power that comes from social media. The persistence of fans through social media “somewhat forced us all to be really creative.” Fans asked both Vin and Kevin Feige, the president of Marvel, what was Vin’s involvement with Marvel. “We felt like, we better come up with something fast,” said Deisel. So Kevin Feige sent over some conceptual art after he told Vin about the character of Groot. A huge book of conceptual art for Guardians of the Galaxy was delivered and that was the first time that Vin saw what they were going to do with Groot. While telling us about this book Vin states, “.. is not like anything you’ve seen in any of the comic books, it is an original Groot.”

Vin then took the book into the living room where his kids were. He opened it to a page that had all the characters from Guardians of the Galaxy and he asked his kids, “What character do you think they want daddy to play?” He was praying that his children would lead him to feeling good about the role and all of the kids pointed to Groot.

Cut to today. Vin’s kids have seen the movie, they are singing the songs all around the house (The soundtrack is awesome and I’ve been playing it for my kids in my house all the time now) and when they are riding in the back seat of the car and see a stand of trees they say, “Look Dad, it’s your brothers and sisters!” That reaction was something he certainly never would have expected.

“It was one of those movies that was remarkable to share with your kids”, said Diesel. He went on to say how movies should provoke conversation. There is nothing that he could have taught his kids about respecting nature that would have been more impactful than playing the character of Groot. No one will look at a tree in the same way after seeing this movie.

Vin had us laughing with his antics. He was funny and warm and enjoyed our questions. He told us about recording the voice of Groot. He recorded the voice while wearing jumping stilts. He wanted to feel like he was seven and a half feet tall and have this sense of being a towering character. “Sometimes you just need one thing to get into the spirit of the character.”

“The innocence of the character is what is so attractive,” said Diesel. I was unable to ask the question that I prepared for the interview because there were only so many questions that could be asked. However, Vin did touch on the answer to the question when he spoke. He talked a lot about his kids and doing different movies that his kids could watch and enjoy. I wanted to ask what attracted him to taking roles of characters that were imposing and dangerous but had hearts of gold and an innocence about them. I think of how amazing the Iron Giant was and was very glad that he mentioned the movie a couple of times in the interview. So I feel that my question was answered.

Like Groot, Vin Diesel said so much in such a short amount of time. He is a performer and he is a fun person to interview. At the end of the interview we all gathered for a group photo. We broke into an impromptu sing along to Hooked on a Feeling, laughter and smiles broke out all around.

I am looking forward to seeing Groot on screen again. We love Groot and we love Vin!