Andrew is a bit of a HELLO KITTY fan. He has asked for coloring books and more. I bet he’d enjoy creating some of these new StoryGIF images on our phones when we download the new Hello Kitty StoryGIF app. It looks like an adorable little app. You create little animated gifs to express emotions. The app works on iOS and Android. You can learn more about it from the Press release below.

Today the app also launched on Android furthering the connection with fans digitally for Sanrio’s consumer products powerhouse. Millions of digital natives and other early adopters can now select from over 50 adorable animations and multiple upcoming themes to create and text unlimited customizable and socially shareable StoryGIFs featuring Hello Kitty and friends.

“Hello Kitty’s continued global allure to fans of all ages is astounding,” said Zoobe CEO, Naz Amarchi-Cuevas. “These quick-text GIF stories are snack-sized treats that bring Hello Kitty to life in a whole new way. They connect the brand via emotion and humor through playful story-telling with the expressive animations.”

Zoobe’s next Sanrio StoryGIF apps are expected to feature Gudetama, Mr. Men & Little Miss and Chococat in the coming weeks. Each app will be followed by themed packs to further contribute to the story creation.

“This new StoryGif app by Zoobe is like nothing currently on the market,” said Egita Di Filippo, Head of Digital Content, EMEA for Sanrio. “We are excited to be on the forefront of a new digital movement with Zoobe, who is leading the way in the marketplace; bridging the messaging world, consumer products and entertainment. Our fans are already in love with the Hello Kitty StoryGIF app, and having as much fun as we did in the development of it, by spreading our company’s motto “Small Gift, Big Smile!” through animations in their messages.” 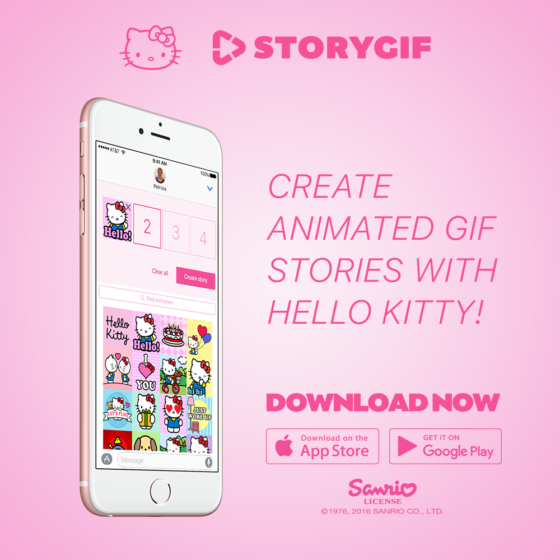 About Zoobe:
Zoobe is the leading character voice-messaging app that works for both iOS and Android. It enables 3D animated characters to perform their user’s voice messages and then creates easy-to-share video clips. Through its expressive power Zoobe redefines how we connect with each other in our daily smartphone communication. Our international reach has led to major partnerships with companies such as Sanrio, Sony Pictures, Capcom, ZeptoLab, WWF, AIS, StudioCanal and more.

About Sanrio:
ABOUT HELLO KITTY. Hello Kitty was born in London in 1974. Over the years she has become one of the most unique and fascinating characters ever created, a worldwide social icon with relevance to women of all ages, ethnicities and economic backgrounds as well as an inspiration to artists and designers. Her motto is: you can never have too many friends.
ABOUT SANRIO. Shintaro Tsuji founded Sanrio Company Ltd. in Japan in 1960 with the motto “Small Gift, Big Smile” and the aim of bringing happiness to people’s lives through inexpensive goods. His company is today not only home to superstar Hello Kitty, but a global brand concentrated on developing significant marketing strategies for classic Sanrio Characters like My Melody, Kerokerokeroppi, Bad Badtz- Maru, Little Twin Stars, Cinnamoroll, Pompompurin, Sugarbunnies, Chococat, Tuxedo Sam, Jewelpet, Kuromi, Charmmykitty and newer acquisitions like the British icons Mr. Men and Little Miss.