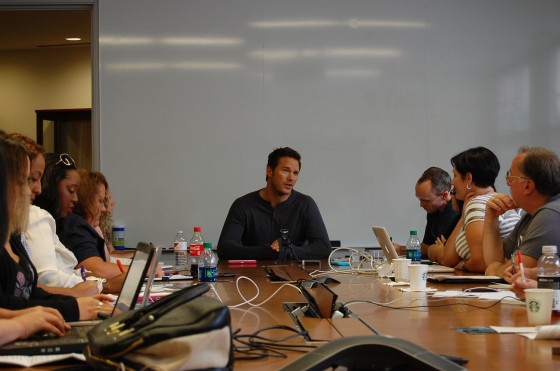 I was really pumped up for the Chris Pratt interview during the #GuardiansOfTheGalaxyEvent. On my way out to California I had the copy of Entertainment Weekly with Chris on the cover. I kept taking selfies with it and tweeting silly things like “Flying to California with @prattprattpratt, I hope he doesn’t commandeer the armrest.” And I took photos like this one:

Pre-flight #selfie with my pal @prattprattpratt before heading to #GuardiansOfTheGalaxyEvent You're Welcome! pic.twitter.com/Gn1I5R5vwO

Just silly stuff because when I think about Chris Pratt I think mostly about a guy who can embrace the silly and come up with something very clever. I love his delivery of lines from movies like Delivery Man and The Lego Movie. He really knocks it out of the park with his comedic timing as Peter Quill in Guardians of the Galaxy. In our group interview he completely won us over with his charm, self-deprecating humor and authenticity.

Laughter started off our interview and laughter finished it. The first question to Chris was from Mitch of Gay NYC Dad who once again gets points for the cleverest break the ice question. Mitch said, “You clearly didn’t need it but did they want you to take dance lessons?” This made all of us laugh and Chris as well. Chris’ response was “how about that, how about that kind of thing. That’s just like another element to this movie that’s like unlike anything, anyone has ever done in a way, so that’s pretty cool.” You can catch Chris’ moves in a few scenes in Guardians of the Galaxy. I know that Mitch was alluding to something later in the movie but I loved a part very early on in the movie it was so funny and not only set up who Peter Quill was in his own mind but who he aspired to be.

The character of Peter Quill within the context of this movie is a man who lost his homeworld because he was abducted, but he still clings to certain things from his past like a treasured audio tape called Awesome Mix Vol. 1. Music is important to him and he fancies himself a bit of a rogue, an outlaw, a ladies man and also a bit of a Rock Star. The music on this tape is a soundtrack to his life and has been important to him through all moments while he’s been in space.

At first, Pratt did not want to go out for the role of Peter Quill. He says that, “I was like, on the diet roller coaster all the time, so sometimes I was like super fat and sometimes I was super fit. And at that point I was super fat and I was like, oh God, I don’t want to go audition for this and be told no.” So he didn’t go for the role and he had heard that James Gunn didn’t want him for the role anyway, at first. Luckily, that wasn’t the end of the story. Chris was watching Zero Dark Thirty and he recalls that he had gotten in really good shape for that film and he enjoyed action but also enjoyed comedy. He decided that he wanted to do more action. “But I want to do it with some comedic elements and kind of bring my own personality into it and my manager said, Guardians of the Galaxy. I said, oh shoot, okay, maybe, you know what, why not, let’s go after it and just see.”

Chris auditioned and director James Gunn saw something in Chris that he’d been searching for in his Peter Quill. Things really synced up with what Chris’ goals were and what James was looking for in that character. Chris wanted to do an action movie but he “wanted to breathe my own spirit into it and I thought there was nothing out there that was going to let me do that.” That was exactly what James Gunn was looking for. Peter Quill has had many incarnations in the comic books and in this movie there would be yet another incarnation of that character.

When asked if there was added pressure about being the lead in a new franchise (Guardians of the Galaxy) vs being the lead in an existing franchise (Jurassic Park), Chris replied that if he was smart he would feel the pressure but he doesn’t. He feels that the pressure falls on the studios. He’s an actor hired to do a job and the studios do all that they can to support him and the other actors so that they do not fail.

My friend Chris from Dad of Divas asked the question about comic books. Did Pratt like them and what ones did he read growing up? The answer was that he didn’t really read many comics because they were expensive and he didn’t have a lot of money growing up. But his friends had comics so he looked at those. Chris came from an artistic family and so he would look at comics for the art to be inspired to draw. “…I loved the characters, and what they were, just the physicality of the heroes. I just like was a big fan of that, always drawing comic book heroes. I was a huge fan of the comic books.” He went on to tell us, “There was one time that I won three hundred bucks playing Bingo with my mom and bought three hundred bucks worth of comic books. One of them was a Guardians of the Galaxy comic book and it was right around that time I guess in 1991 there was an incarnation of it.” He went on to tell us many more books that he enjoyed which included some old Richie Rich comics and Conan the Barbarian ones.

One of Chris’ favorite moments while shooting was the first time that he put on Peter Quill’s jacket, the maroon duster. Just putting it on, “I was like, oh my God, the jacket was totally telling me how Peter Quill would walk, you know.”

His thoughts on being an iconic hero for kids of this generation: “Oh my gosh that is, that is to me the greatest part of all this. I remember pretending to be Han Solo in my backyard, or pretending to be Indiana Jones, or Luke Skywalker as a kid. I mean, comic books and storytelling of this magnitude is what really helped me cultivate my imagination as a young kid”

Chris was asked about how much training he had to do for the movie. There was a lot of training. He even started to suspect that extra stunt training was added to get him to lose more weight. He quipped, “Chris, even more stunt rehearsal, can you believe it [LAUGHTER] this stunt is you running on a treadmill.”

His physical training to get in shape for this role also tied to the music of the movie. Chris was asked what input he had on the soundtrack if any and he told us that he loves all the songs and also hates all the songs because he would listen to them when he ran. He did say that O-O-H Child was his favorite because it matched the pace that he would run. I think that love/hate relationship with the music ties things nicely back around to Peter Quill who must also have a love/hate relationship with the songs on awesome Mix Vol. 1. I say this because while they may remind him of home and his memories of Earth they also remind him that he was abducted from his home, Earth. So the music is a connection and also a bitter reminder of what he lost. 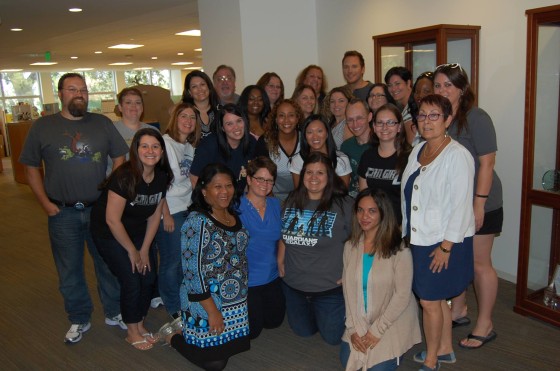 After answering our questions Chris took a group photo with all of the bloggers. I personally took the opportunity to shake his hand and tell him how much I enjoyed the movie and to thank him for his time. He thanked me and then was off to do a ton of other interviews over the rest of the day. He was so much fun to interview and I cannot wait to see the movie again.